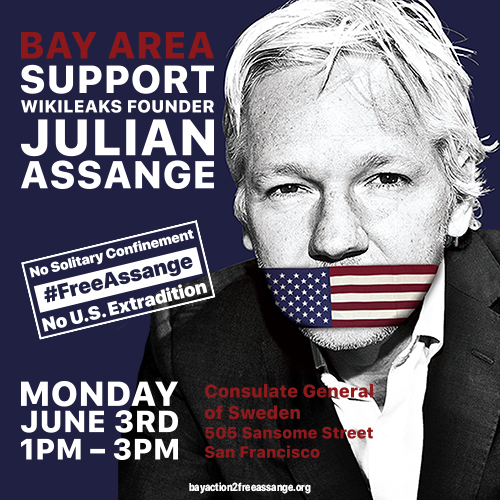 Please bring signs and any bull horns you have.

Background: Please see Wikileaks dot org website
The attack and arrest by the British government and police on Julian Assange with the direct support of the US controlled Ecuadoran government and the US government is an attack on all journalists, whistleblowers, and democracy. It is aimed at closing down all alternative media. While there is no prosecution of the war criminals exposed by WikiLeaks, Assange, Chelsea Manning, Ola Bini, and other journalists and whistleblowers are under attack and imprisoned.

Recent developments in the Swedish attack:
http://www.informationclearinghouse.info/51675.htm
and
https://www.wsws.org/en/articles/2019/05/22/assa-m22.html
"An extraordinary bid by Swedish authorities to rush a hearing into the possible extradition of WikiLeaks founder Julian Assange to Sweden has been delayed by a court until June 3. That is because Assange’s lawyers have not even been able to consult the jailed journalist and publisher.
The haste with which the Swedish prosecutor sought a formal order to detain Assange on trumped-up sexual misconduct allegations, further highlights the overturning of basic legal rights by all the governments—the American, British, Australian and Swedish—that are conspiring to force Assange to the US on bogus charges that could carry life imprisonment, or even the death penalty."
and
https://www.craigmurray.org.uk/archives/2019/05/the-missing-step/
"In Sweden, prosecutors have applied to the Swedish courts to issue a warrant for Julian’s arrest. There is a tremendous back story to that simple statement.

The European Arrest Warrant must be issued from one country to another by a judicial authority. The original Swedish request for Assange’s extradition was not issued by any court, but simply by the prosecutor. This was particularly strange, as the Chief Prosecutor of Stockholm had initially closed the case after deciding there was no case to answer, and then another, highly politically motivated, prosecutor had reopened the case and issued a European Arrest Warrant, without going to any judge for confirmation.

Assange’s initial appeal up to the UK Supreme Court was in large part based on the fact that the warrant did not come from a judge but from a prosecutor, and that was not a judicial authority. I have no doubt that, if any other person in the UK had been the accused, the British courts would not have accepted the warrant from a prosecutor. The incredible and open bias of the courts against Assange has been evident since day 1."
END_OF_DOCUMENT_TOKEN_TO_BE_REPLACED
Added to the calendar on Tue, May 28, 2019 1:22PM
Add Your Comments
Support Independent Media
We are 100% volunteer and depend on your participation to sustain our efforts!