A Socialist Defector: From Harvard to Karl-Marx-Allee 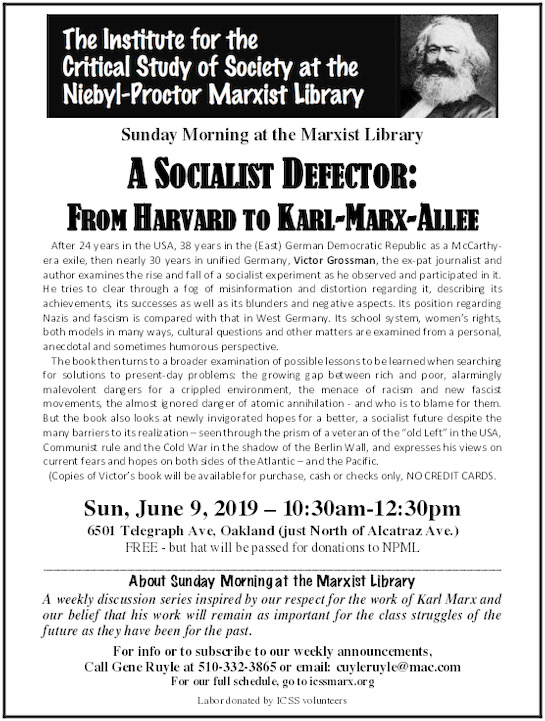 A Socialist Defector:
From Harvard to Karl-Marx-Allee

After 24 years in the USA, 38 years in the (East) German Democratic Republic as a McCarthy-era exile, then nearly 30 years in unified Germany, Victor Grossman, the ex-pat journalist and author examines the rise and fall of a socialist experiment as he observed and participated in it. He tries to clear through a fog of misinformation and distortion regarding it, describing its achievements, its successes as well as its blunders and negative aspects. Its position regarding Nazis and fascism is compared with that in West Germany. Its school system, women’s rights, both models in many ways, cultural questions and other matters are examined from a personal, anecdotal and sometimes humorous perspective.
The book then turns to a broader examination of possible lessons to be learned when searching for solutions to present-day problems: the growing gap between rich and poor, alarmingly malevolent dangers for a crippled environment, the menace of racism and new fascist movements, the almost ignored danger of atomic annihilation - and who is to blame for them. But the book also looks at newly invigorated hopes for a better, a socialist future despite the many barriers to its realization – seen through the prism of a veteran of the “old Left” in the USA, Communist rule and the Cold War in the shadow of the Berlin Wall, and expresses his views on current fears and hopes on both sides of the Atlantic – and the Pacific.
(Copies of Victor’s book will be available for purchase, cash or checks only, NO CREDIT CARDS.

For info or to subscribe to our weekly announcements,
Call Gene Ruyle at 510-332-3865 or email: cuyleruyle [at] mac.com
For our full schedule, go to icssmarx.org
Labor donated by ICSS volunteers
END_OF_DOCUMENT_TOKEN_TO_BE_REPLACED
Added to the calendar on Mon, May 27, 2019 2:02PM
Add Your Comments
Support Independent Media
We are 100% volunteer and depend on your participation to sustain our efforts!