Newswire
Calendar
Features
Home
Donate
From the Open-Publishing Calendar
From the Open-Publishing Newswire
Indybay Feature
Publish to Newswire
Add an Event
Related Categories: U.S. | Anti-War
Memorial Day 2019: US Army tweet prompts outpouring of antiwar sentiment
by George Marlowe (WSWS Repost)
Monday May 27th, 2019 8:58 AM
“Many of us are a shell of who we were before” 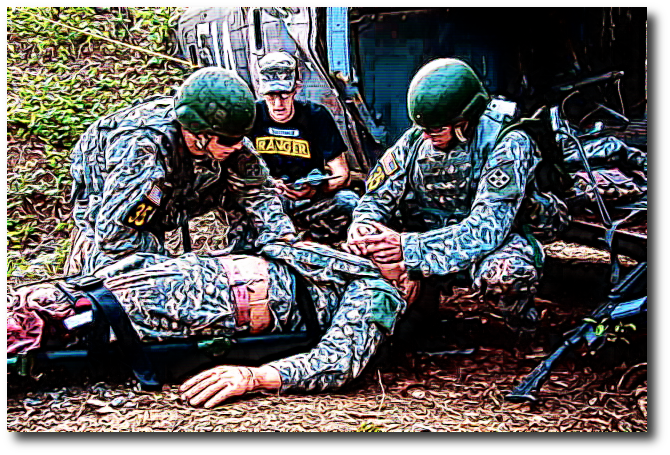 By George Marlowe at the World Socialist Web Site

Last Thursday, the US Army asked its followers in a tweet, “How has serving impacted you?” It was meant to be a routine Twitter post ahead of Memorial Day to draw responses which would glorify the United States Army and veterans who served as cannon fodder for the military. It did not go as planned and backfired spectacularly.

More than 10,000 people replied in response with an outpouring of antiwar sentiments detailing the horrors, crimes and ravages of war. Many of the comments are harrowing stories of lives completely undone, a portrait of an entire population scarred and destroyed by US militarism at home and abroad.

“Your impact is that you’re a death cult,” San declared bluntly on the US war machine in a typical response.

“Many of us are a shell of who we were before,” said one military veteran.

Shane spoke of veteran suicides and unending military deployments. “My best friend from high school,” he said, “was denied his mental health treatment and forced to return to a third tour in Iraq, despite having such deep trauma that he could barely function. He took a handful of sleeping pills and shot himself in the head two weeks before deploying.”

“I didn’t serve but my brother did,” Penny noted, recounting the tragedy that befell her family as a result. “He never went to war but still shot himself in the head. He was the sweetest most tender person I’ll ever know and the US Army ruined him.”

Veterans continue to kill themselves at alarming levels in the United States. More than 52 percent of military suicides occur among US Army veterans. A Veterans Administration study from 2016 showed that approximately 20 veterans die every day, or one every hour or so. According to the Iraq and Afghanistan Veterans of America (IAVA), more than 5,500 veterans killed themselves in 2018.

Alice spoke of the generational traumas felt by the scars of past wars going back to World War II. “My grandfather fought in Burma with the U.S. Army in WWII,” Alice wrote. “He lived a long life and had 7 children. But as he got older the nightmares came. It broke my heart to hear him tell me with tears in his eyes that he was dreaming every night of all he had seen.”

Chanda spoke of similar traumas affecting whole families. “My uncle was US Airforce,” she said, “and he came home with PTSD that went untreated for almost 50 years and had an impact on his ability to be the family man he needed to be. Now, he’s suffering serious physical side effects from agent orange exposure. It’s affected my whole family.”

“The real take away,” Brett remarked on the Army’s tweet, “for the social media/marketing folks whose brilliant idea this was should be to stop selling and glorifying military service to underprivileged 18-year-olds while covering up the consequences and side effects.”

Another commentator declared, “Soldiers are not your money-bought pawns. They are not random collateral. They are family. They are friends. Our mothers and fathers. Our sisters and brothers. Our aunts, uncles, and cousins. They are more than a serial number. Even if they don’t lose their lives, they lose themselves.”

“The US Army takes advantage of those stuck in unfortunate circumstances,” said another, “while the elite continue to profit off their ‘service’ and reap their benefits. My heart breaks for every veteran in this thread brave enough to speak their painful truths of this dystopian cult.”

The pervasiveness of antiwar sentiment is detailed in comments like the following as well: “My grandfather was drafted from Puerto Rico against his will and taken to Korea to fight a war for the USA and when he didn’t want to kill people that didn’t do anything to him he was thrown in jail.”

A person in Sacramento, California spoke of the crimes of US imperialism in Vietnam and that war’s continuing impact: “My grandparents were used as pawns serving the US army in aiding them on the Ho Chi Minh trail. They served in The Secret War, and when the US lost the Vietnam war the Hmong were left to die in genocide. To this day Hmong veterans are not recognized by the US army.

“More than half of my people were wiped out through genocide. Only about a third of what once was the Hmong population are scattered in diaspora around the world. Many in the US who deal with PTSD through alcoholism, abuse, and addiction to opium.

“And the children are left to pick up the pieces and navigate a delicate past, present, and future for the years to come while inheriting intergenerational trauma.”

“My dad was in the marines in the 2000s,” another person explained. “He served in Iraq and then got honorably discharged. He talked a lot about how proud he was for that, but I’ve spent a lot of my time the past couple months crying. How does pride come into play when he’s gone?

“He slipped. He made the mistake of fueling his addiction. Once. But with all the medication prescribed to him his body couldn’t handle that. So he was on a ventilator and then they disconnected him a week later after giving him 72 hours.

“Take better care of our veterans. He was only 37. My mom used to do everything with him and now she looks so lonely. The calendar that he hung is still there, in our kitchen. It still says December 2018. No one has touched it.”

Nathan spoke of the wars coming home with devastating violence, “You all make the world a scary place playing war games killing people overseas then the poor guys come home, get police jobs and end up shooting people in our communities.” More than one thousands Americans are killed by police every year, a reflection of the brutalization and militarization of all forms of social life.

Karen spoke of the falsehoods and imperialist deceits used to prosecute these illegal wars. “My uncle is still MIA in Laos,” she said. “He was involved in a secret war, and the military lied to my family about his location. He was 20 years old, too young to vote at that time.

“The US has learned nothing,” Karen added, “and continues to manufacture war under false pretenses.”

This outpouring of rage on Twitter highlights the latent but deep going antiwar sentiment in the American population that finds no expression in the current political system or the corporate media. A quarter century of endless wars of aggression waged to offset the decline of US capitalism on the world stage has taken a heavy human toll at home as well as abroad.

A continuous string of administrations from both parties of big business, from George H.W. Bush, to Bill Clinton, George W. Bush, Barack Obama and Donald Trump, are the chief architects of a maelstrom of bloody imperialist violence unleashed around the world since the dissolution of the Soviet Union in 1991.

While George H.W. Bush went to his grave praised by the political establishment, thousands of veterans and millions of civilians have been scarred by the first Gulf War which he oversaw. Following Clinton’s crimes in Iraq and Yugoslavia, George W. Bush’s administration began the unending “War on Terror” that killed and maimed millions in Iraq and Afghanistan and destroyed and destabilized an entire civilization and region. Nearly two decades later the US military continues to occupy both countries.

Millions hoped that Obama would end the wars of the previous Bush administration, but he extended the theater of war to more than seven countries, including Libya and Syria, and carried out deadly drone strikes in multiple countries that killed innumerable innocent civilians. Trump has continued Obama’s wars, maintaining an illegal occupation of northeastern Syria and deploying 1,500 additional soldiers to the Middle East to threaten Iran.

The endless sociocide waged by American imperialism has unleashed the largest refugee crisis globally since World War II and threatens the world with the outbreak of a third world war with nuclear armed powers, Russia and China.

War criminals like George W. Bush, Clinton, Obama and Trump have yet to be held to account for their crimes; instead, they walk free and have made enormous fortunes since leaving office. Unlike the Nazi trials of Nuremberg following World War II, there has been no reckoning with the crimes of American imperialism.

For its part, the US media, including the New York Times, Washington Post, CNN, Fox News and the rest of the mainstream media have served as open propaganda instruments for the US ruling elite, justifying the lies and false pretexts manufactured to prosecute criminal wars of aggression and to suffocate mass antiwar sentiment in the population.

These are the crimes that Julian Assange, WikiLeaks and whistleblower Chelsea Manning courageously revealed and risked their lives. For revealing the truths about the wars of American imperialism, a responsibility the media have completely abdicated, both Manning and Assange have been thrown into prison. They are victims of a massive political frame-up by the US ruling class, which now seeks to criminalize the freedom of the press with the use of the Espionage Act.

As the comments in response to the US Army Twitter post reveal, there is a powerful revulsion to war and mass antiwar sentiment in the United States. The crimes of American imperialism are above all the product of the failure of the global capitalist system, the growth of social inequality and the continued division of the world into competing nation states.

The intolerable conditions millions confront in their daily lives are driving them into opposition to capitalism and war. This opposition, however, can only be mobilized in progressive direction through the building of a mass antiwar, anti-capitalist and socialist movement of the international working class to once and for all end the scourges and horrors of war and capitalism.