Photo: 17-year-old Nalleli Cobo, a Los Angeles resident who was sickened by toxic emissions from the oil drilling site, AllenCo., near her home, speaks at a Brown's Last Chance press conference at the State Capitol last year. 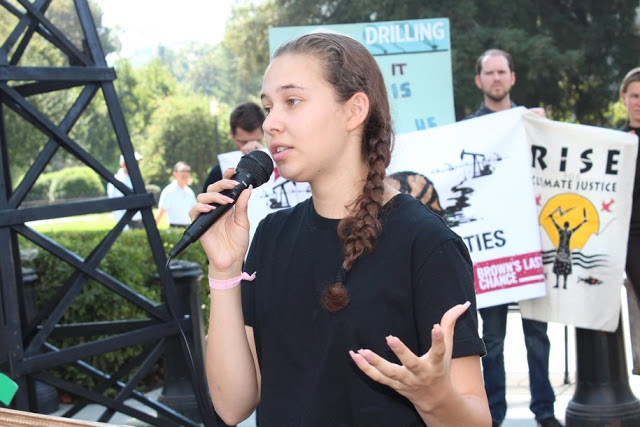 After intense lobbying by the Western States Petroleum Association and the oil companies, a bill to create health and safety zones around oil and gas wells stalled in the Appropriations Committee of the California Assembly on May 16, becoming a two-year-bill.

The bill will be brought up again in 2020. AB 345, authored by Assemblymember Al Muratsuchi (D-Torrance), would ensure that new oil and gas wells not on federal land are located 2,500 feet away from homes, schools, hospitals, playgrounds and health clinics.

Unlike other oil and gas producing states like Texas, Pennsylvania and Colorado, California at this time has no setbacks from oil and gas drilling operations.

Texas, the nation’s top oil producer, has 250-foot setbacks from oil and gas wells, inadequate for health and safety protections, but even that is much better than California’s lack of any setbacks. Dallas has 1500 foot setbacks to protect homes, schools, hospitals and other facilities. Colorado, Pennsylvania, Texas and other oil and natural gas producing states are at this time still ahead of California on fracking and oil drilling setback regulation.

Frontline communities and environmental justice advocates are hopeful that the Legislature will approve the bill in 2020.

"The Chairperson of the Appropriations Committee, Lorena Gonzalez, indicated her general support for the policy and committed to working with the author to find a way to move the bill forward at the end of the session," according to a statement from VISIÓN (Voices In Solidarity Against Oil in Neighborhoods), the coalition of frontline and environmental justice groups promoting the bill. "The bill, championed by frontline communities directly impacted by oil and gas operations in partnership with environmental justice advocates, AB 345 will be taken up after this year’s legislative session concludes."

Ingrid Brostrom, Assistant Director with the Center on Race, Poverty & the Environment and VISIÓN co-chair, stated, “Health and safety for communities on the fence line to dangerous drilling is an urgent issue for Californians across the state—from Wilmington to Arvin and beyond—who breathe in the toxic emissions from nearby oil wells daily. Every moment we do not act, our children and families are paying with their health and quality of life. We look forward to continuing conversations on how to get this common sense, science-based health and safety zone into law."

This failure by the legislators to approve the bill at this time is no surprise since only two bills opposed by Big Oil have been able to make it out of the Legislature to the Governor's Desk over the past four years. Big Oil is the largest and most powerful lobby in the state — and the Western States Petroleum Association (WSPA) is the largest and most powerful lobbying organization.

Low-income communities and people of color in Kern County, the LA Basin and elsewhere are most impacted by the failure of California regulators to approve health and safety zones around oil and gas drilling operations.

Most Californians, including many environmentalists, are unaware of how effectively Big Oil has captured California regulators.

A review of state permitting records in the report “The Sky’s The Limit: California,” shows that more than 21,000 drilling permits were issued during the Brown administration. These wells include 238 new offshore wells approved between 2012 and 2016 alone, according to Department of Conservation data analyzed by the Fractracker Alliance: http://www.fractracker.org/…

WSPA and Big Oil wield their power and influence over public discourse in 6 major ways: through (1) lobbying; (2) campaign spending; (3) serving on and putting shills on regulatory panels; (4) creating Astroturf groups: (5) working in collaboration with media; and (6) contributing to non profit organizations.

In a classic case of how effectively Big Oil has captured the regulatory apparatus in California, Catherine Reheis-Boyd, President of the Western States Petroleum Association, chaired the Marine Life Protection Act (MLPA) Initiative Blue Ribbon Task Force to create so-called "marine protected areas" in Southern California. Yet big environmental NGOs such as the California League of Conservation Voters, the Natural Resources Defense Council (NRDC) and the Ocean Conservancy described the process that Reheis-Boyd and other task force members with big conflicts of interest oversaw as "open, transparent and inclusive."

§For safe environment---Re-tool the industrial revolution
by Unity Jack for Mother Earth
Sunday Jun 2nd, 2019 2:58 AM
Fossil Fuels pollute the air, land, and water locally and globally. No amount of reformation can change this dangerous assault on the living planet, because pollution from fossil fuels is a main contradiction in destroying the ecological balances of the organic and inorganic webs-of-life on planet Earth.

To end this aggressive war against Mother Nature the way forward appears to be to retool the industrial revolution to renewable energy sources such as wind, tidal, and solar power, that transforms to electricity and is more power than all the polluting fossil fuels combined.

Solar power has been turning on the livability for billions of years and solar energy transformed to electricity would provide communication, transportation, heat, cold (refrigeration) and the lights we need forever.

That would allow the oxygen to return in Plus valance again to make a livable planet with clean oxygen from the Green Revolution. You yet have a world to win!! Elect woman equally to gender parity, that way allowing equal access to law making for the better half. Harmony and joy of the specie can happen again that way of real liberation from aggressive pollution male domination. Workers of the world unite!!
Add a Comment
Support Independent Media
We are 100% volunteer and depend on your participation to sustain our efforts!