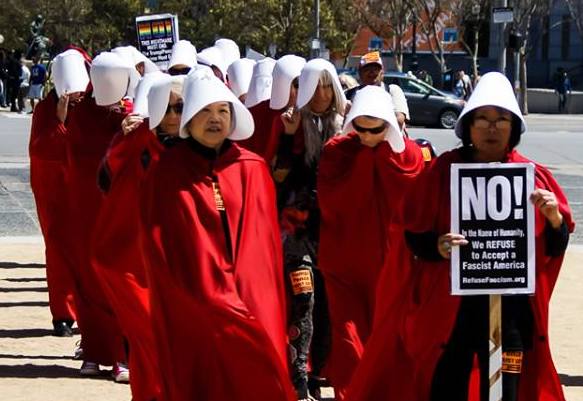 The Trump/Pence Regime Must Go!

The author of the Alabama law that just passed said, “Why not go all the way?” His Alabama ban includes no exceptions for rape or incest, and promises to punish doctors that perform abortions with sentences for up to 99 years in prison.

More than 250 anti-abortion laws have been proposed at the state level across the country this year. Contrary to the narrative that the new Democratic-controlled Congress is reining in the regime, the fascists who have kept their eyes on the prize understand that the judiciary has been, and still is, being remade by the Trump/Pence regime, capable of fulfilling their most fervently held goals: to pull American society back to the 1950s and lock people – especially women – into a situation where they are helpless to control the most basic and fundamental circumstances that affect their lives. Ultimately, they’ll be coming for legal contraceptives as well… and then gay, trans, and gender non-conforming people’s rights to be themselves and love who they want to. If you’re looking for clues on how this works, read The Handmaid’s Tale.

Abortion is more than healthcare, and the “pro-life” forces are in fact Christian fascists. 'Christofascists' find "fertile recruitment ground in the anti-choice movement," say journalists Elizabeth King and Erin Corbett. "Attacks on reproductive rights are nothing new, but fascist groups’ infiltration of anti-choice groups and recruiting around anti-choice organizing in their genocidal agenda is an escalation...

"Not surprisingly, there is often overlap and collaboration between the so-called pro-life movement—typically made up of religious conservatives who oppose a person’s right to safe, legal, and affordable abortion—and racist far-right movements. Myriad activists and journalists have chronicled the short line between hatred of gender and sexual minorities and white nationalism. Gamergate, for example, revealed how easy it is for male supremacists and white supremacists to target common enemies together, and how quickly men who hate women can become radicalized. Not only do misogynists such as “incels” tend to hold deeply racist views and transition to white nationalism, but white nationalists themselves tend to target women and trans people, and have a particular animus for abortion rights."

We’re teetering on the brink of a post-Roe reality in this country. The point is, what do we do about it?

Safe and legal access to abortion is essential to the bedrock foundation of a functioning, humane society (or one approaching that status). In the name of humanity, for women and everyone here and around the world, it’s past time we take to the streets and demand that the Trump/Pence regime must go.


Next Bay Area Refuse Fascism Organizing Meeting
Tuesday May 21, 6:30pm
Sports Basement
1590 Bryant Street, San Francisco
END_OF_DOCUMENT_TOKEN_TO_BE_REPLACED
Added to the calendar on Mon, May 20, 2019 11:22PM
Add Your Comments
Support Independent Media
We are 100% volunteer and depend on your participation to sustain our efforts!