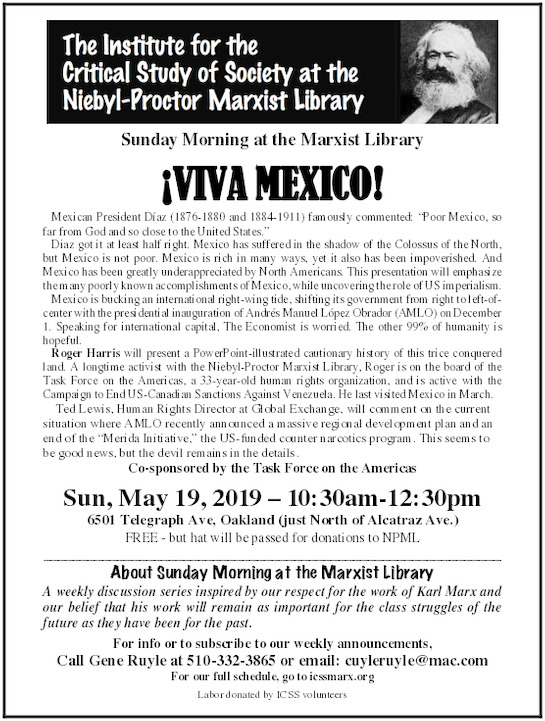 Mexican President Díaz (1876-1880 and 1884-1911) famously commented: “Poor Mexico, so far from God and so close to the United States.”
Diaz got it at least half right. Mexico has suffered in the shadow of the Colossus of the North, but Mexico is not poor. Mexico is rich in many ways, yet it also has been impoverished. And Mexico has been greatly underappreciated by North Americans. This presentation will emphasize the many poorly known accomplishments of Mexico, while uncovering the role of US imperialism.
Mexico is bucking an international right-wing tide, shifting its government from right to left-of-center with the presidential inauguration of Andrés Manuel López Obrador (AMLO) on December 1. Speaking for international capital, The Economist is worried. The other 99% of humanity is hopeful.
Roger Harris will present a PowerPoint-illustrated cautionary history of this trice conquered land. A longtime activist with the Niebyl-Proctor Marxist Library, Roger is on the board of the Task Force on the Americas, a 33-year-old human rights organization, and is active with the Campaign to End US-Canadian Sanctions Against Venezuela. He last visited Mexico in March.
Ted Lewis, Human Rights Director at Global Exchange, will comment on the current situation where AMLO recently announced a massive regional development plan and an end of the “Merida Initiative,” the US-funded counter narcotics program. This seems to be good news, but the devil remains in the details.
Co-sponsored by the Task Force on the Americas

For info or to subscribe to our weekly announcements,
Call Gene Ruyle at 510-332-3865 or email: cuyleruyle [at] mac.com
For our full schedule, go to icssmarx.org
Labor donated by ICSS volunteers
END_OF_DOCUMENT_TOKEN_TO_BE_REPLACED
Added to the calendar on Thu, May 16, 2019 3:47PM
Add Your Comments
Support Independent Media
We are 100% volunteer and depend on your participation to sustain our efforts!