Add an Event
Newswire
Calendar
Features
Home
Donate
From the Open-Publishing Calendar
From the Open-Publishing Newswire
Indybay Feature
Publish to Newswire
Add an Event
Related Categories: Santa Cruz Indymedia | U.S. | Environment & Forest Defense
Report: Trump Fracking Leases Top 1 Gigaton of Potential Climate Pollution in Lower 48
by Center for Biological Diversity
Wednesday May 15th, 2019 9:47 AM
TUCSON, Ariz., May 15, 2019 — A new Center for Biological Diversity report shows that the Trump administration is dramatically ramping up oil and gas leases, offering nearly 5 million acres of public lands in the lower 48 states ― most of it in Wyoming and Utah. Those leases, offered as scientists warn that fossil fuels should be rapidly phased out, contain 1 gigaton of potential greenhouse gas pollution. 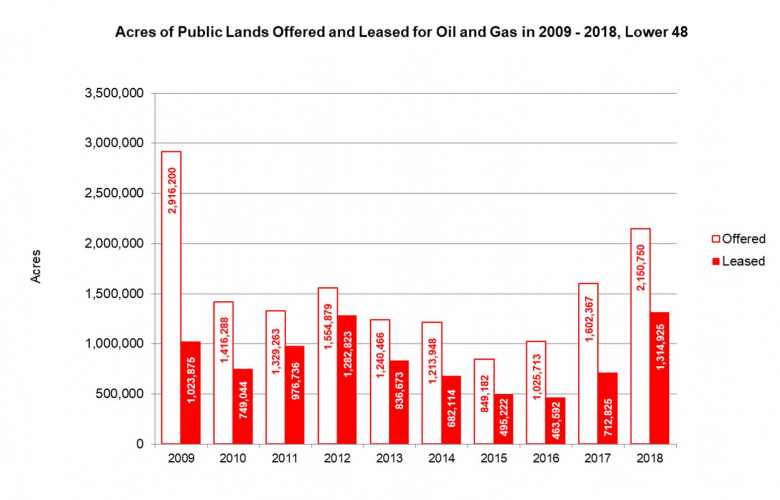 “Trump’s Interior Department is managing our public lands like a climate kleptocracy,” said Taylor McKinnon, senior campaigner at the Center for Biological Diversity. “Each new lease risks decades of carbon pollution that our climate can’t afford. Scientists agree that we must stop fossil fuel expansion and begin rapid decarbonization over the coming decade.”

After slashing environmental review procedures in January 2018, the Trump administration reversed a decade-long trend of declining federal oil and gas lease sales in the lower 48 states. Once offered, unleased parcels are available for leasing for two years. Once issued, leases can last for decades.

* Under Trump, more than 5 million acres of public land have been put up for auction and more than 1.3 million acres were leased in 2018 ― the most in a decade;
* Oil and gas leases offered contained more than 1 billion tons ― an entire gigaton ― of potential greenhouse-gas pollution, while leases sold to industry contain almost 900 million tons.
* The potential pollution in sold leases quadrupled from 2017 to 2018;
* Wyoming and Utah are the hardest-hit states, with more than 2 million acres leased for drilling and fracking;
* The administration is using a troubling regulatory scheme that short-changes environmental review and hides information from the public before lands are leased;
* Fracking development threatens public health, wildlife and endangered species, clean water and recreational areas.

“Federal fossil fuel leasing is one of America’s biggest climate problems, but it’s a solvable one,” said McKinnon. “Presidents have the authority to end new leasing and phase out federal fossil fuel production. No serious climate policy in this time of crisis would avoid that opportunity.”

Using federal estimates of oil and gas volumes on public lands, the report calculates volumes and associated lifecycle greenhouse-gas pollution for public lands parcels in the lower 48 states that have been offered and leased by the Trump administration.

Federal fossil fuel production causes about a quarter of all U.S. greenhouse gas emissions. Peer-reviewed science estimates that a federal fossil fuel leasing ban would reduce CO2 emissions by 280 million tons per year, ranking it among the most ambitious federal climate policy proposals in recent years.

Federal fossil fuels that have not yet been leased to the industry contain up to 450 billion tons (GtCO2e) of potential climate pollution. Those already leased contain up to 43 billion tons. Leased federal oil, gas and coal are projected to last until 2055, 2044, and 2041, respectively, given the Energy Information Administration’s 2016 “reference case” for fossil fuel production. 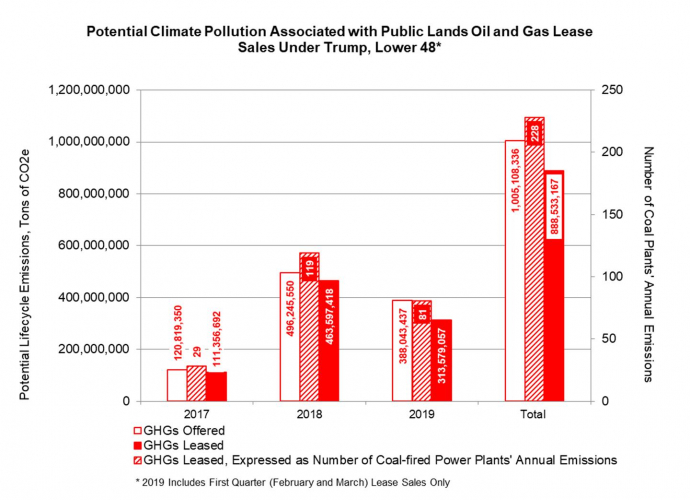 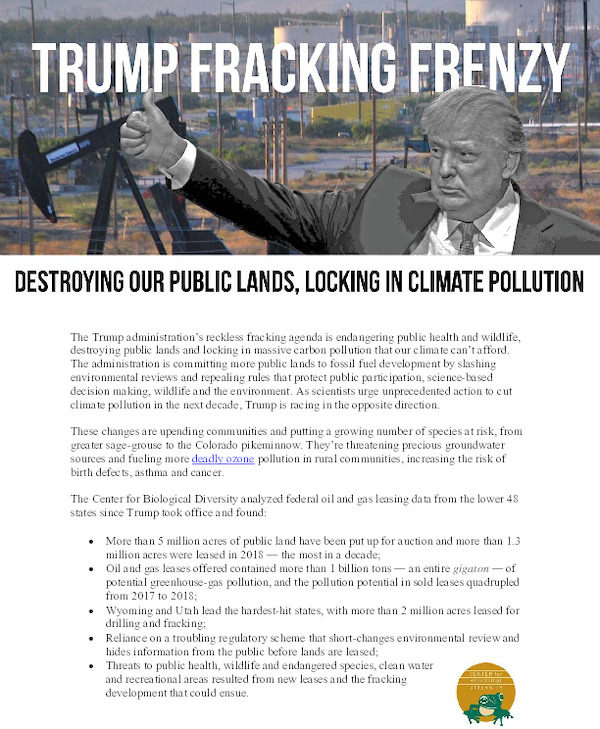 Download PDF (439.8KB)
https://biologicaldiversity.org/
Add Your Comments
Support Independent Media
We are 100% volunteer and depend on your participation to sustain our efforts!