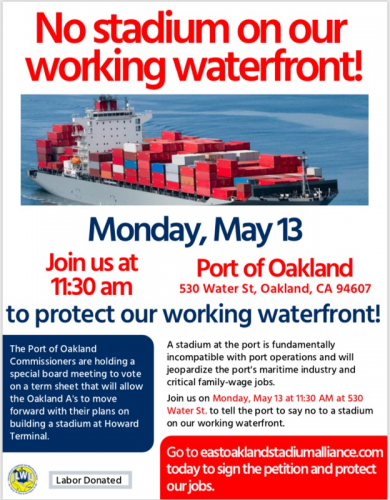 Import event into your personal calendar
Date:
Monday, May 13, 2019
Time:
11:00 AM - 12:00 PM
Event Type:
Protest
Organizer/Author:
ILWU
Location Details:
Port Of Oakland Offices
530 Water St.
Oakland
Join ILWU longshore workers, maritime workers and community members to protest the land grab by the owner of the A's John Fisher who also owns the GAP and controls the KIPP and Rocketship charter school chain. They want to take over public port land that would threaten the jobs of longshore workers, truckers and other maritime workers as well as gentrifying West Oakland with 4,000 $1 million dollar condos on port property.

Stop the gentrification and union busting.

The A's will pay the Port $100,000 for the right to continue negotiations over the purchase of the 50-acre property located west of Jack London Square. The team hopes to build a 35,000-seat ballpark on the site that also includes 3,000 housing units and retail. Under terms of the agreement, the A's would pay an additional $150,000 to the Port if a deal is not consummated after one year; $200,000 after two years; and $250,000 after three years.

The framework for the term sheet sets the annual rent price for the property at $3.8 million for the first 20 years. The proposal reserves the Port's authority to approve any final project for Howard Terminal until the A's have fully navigated the long list of land-use hurdles associated with building on the bay. It also requires the A's to offer a comprehensive traffic plan to the Port as part of the permitting process.

Meanwhile, legislation that would help the City of Oakland finance infrastructure and transportation projects for the ballpark was approved Monday by the State Senate on a 34-0 vote. The bill would allow Oakland to create an infrastructure financing district.

The Howard Terminal in Oakland, home to many shipping containers, is proposed as a baseball stadium site.

A crane and a conveyor belt rise over the Oakland Estuary at Schnitzer Steel's recycling yard.Photo: Noah Berger / Special to The Chronicle
The Oakland A’s cleared early hurdles this week at the state Legislature with the approval in committee of two bills essential to the team’s plan to build a new stadium at Howard Terminal at the Port of Oakland.

The bills — SB293 and AB1191 — would streamline the process for the A’s to start building a privately financed ballpark, which would include affordable housing and commercial properties. In May, SB293 will be heard on the Senate floor and AB1191 will be voted on in the Assembly Appropriations Committee.

Initially, maritime workers opposed the bills as attempts to bypass existing law by eliminating the authority of the State Lands Commission and the San Francisco Bay Conservation and Development Commission. The SLC and BCDC have jurisdiction over waterfront developments in the state.

But the bills’ authors added amendments to include language and clarification confirming the jurisdictions of the State Lands Commission and BCDC.

Oakland A’s owner John Fisher has been trying to build a new stadium forever, and for just as long he’s been insisting he’ll do it entirely with private money. So, ruh-roh:

The bill would allow Oakland to create an infrastructure financing district for the roughly 50-acre waterfront property where the Oakland Athletics intend to build a 35,000-seat ballpark, 3,000 units of housing, in addition, to retail and office space.

“Any financing that emanates from the district would not be used for the actual stadium itself. That is going to be privately financed,” [state Sen. Nancy] Skinner said on the state senate floor. “but rather for the other transportation and other infrastructure that may be needed at the site.”
So, okay, if you’re new to this whole development subsidy thing, “transportation and other infrastructure” could mean stuff that genuinely has nothing to do with an A’s stadium, or at least only tangentially benefits it while also benefitting the whole area; or it could mean “everything about the stadium that isn’t actually holding up the seats.” It’s always tough to say until you see the actual funding plan, and we don’t have that for the A’s. The actual bill appears to leave it up to the city of Oakland how big to draw the tax increment financing district, and what to spend the money on, so that’s no help either.

(And if you’re new to tax increment financing, it’s basically kicking back taxes from a new development to help pay for part of the development’s costs. It doesn’t usually work out too good.)

The A’s planned Howard Terminal site will have lots of environmental cleanup costs, but team execs say they’re going to pay for those; in fact, team president Dave Kaval went so far as to say back in February, “There are going to be a lot of infrastructure costs on the site, whether it’s transportation, whether it’s sea level rise, whether it’s environmental mitigation. Those are all things that as part of the project, we’re willing to pay for.” And by “the site” Kaval meant the whole site, including other development, so … beats me, man.

Whose Dock Is This? Our Dock! CWA AFA Pres Sara Nelson At Oakland Howard Terminal May Day 2019
https://youtu.be/rk0t_mTmErI

AFA CWA President Sara Nelson attended the Oakland Howard Terminal May Day Rally to support the struggle of ILWU Local 10 longshore workers and other maritime workers from the development of an A's stadium on the working terminal. Whose Dock Is This? Our Dock said Nelson at the rally and joined other trade unionists in demanding that it not be developed by the A's billionaire owner John Fisher.
President Nelson also reported on why she had called for a general strike to stop the government shutdown by President Trump that threatened the health and safety of airline workers and the public.

This presentation was made at the Port Of Oakland Howard Terminal on May 1, 2019.

On May Day 2019 international president of the Association of Flight Attendants, AFA CWA Sara Nelson attended the May Day Oakland Howard Terminal where a ballpark threatens longshore drives. She was interviewed by KPFA WorkWeek Steve Zeltzer about here participation in Oakland and the issues facing working people. She had called for a general strike against the Trump government shutdown.

Hundreds of longshore workers from the bay area, LA and Canada along with other trade unionists joined the May Day Rally at the Port of Oakland initiated by ILWU Local 10. Also joining them were other speakers including CWA AFA president Sara Nelson. She spoke about the reasons she called for a general strike. Oakland Teachers Association president Keith Brown also spoke about public education and the lack of funding while money was available for stadiums.

Added to the calendar on Sun, May 12, 2019 2:02PM
§ILWU Longshore Workers Rallied On May Day At Port Of Oakland
by ILWU 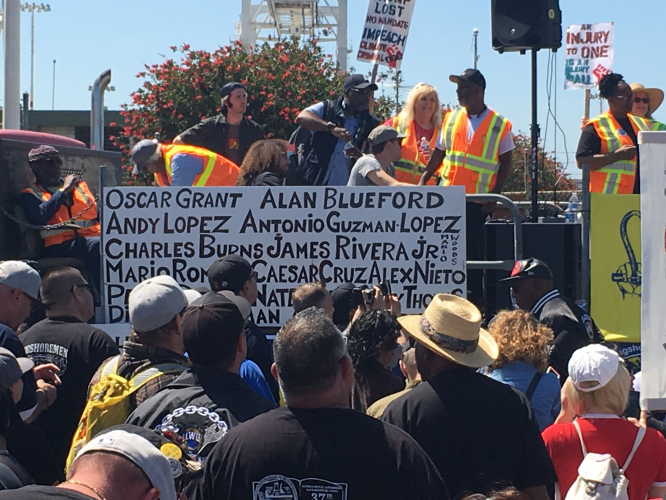 original image (4032x3024)
Hundreds of ILWU Longshore workers, trade unionists and supporters of working people rallied on May Day at the Howard Terminal to protest the effort by A's owner John Fisher to take over the terminal for a stadium and 4,000 $1 million dollar condos.
§Billionaire John Fisher Wants Port Of Oakland Howard Terminal
by ILWU 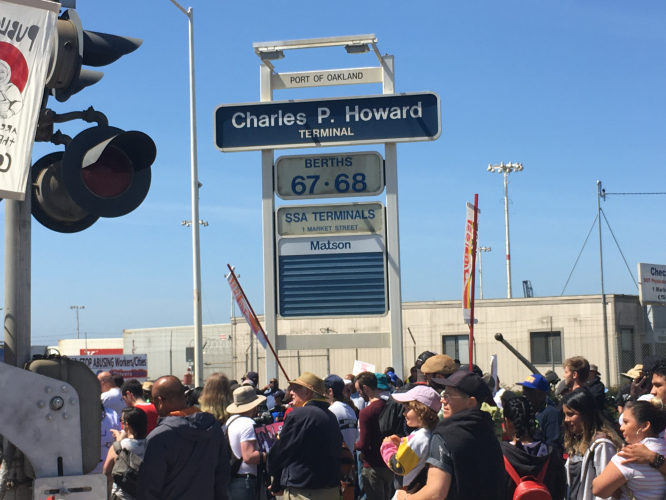 original image (4032x3024)
Billionaire John Fisher wants to take over part of a working port for his A's stadium at Howard Terminal but refuses to build where the Coliseum is. His effort of profiteering and destroying port jobs is supported by the Port of Oakland Commissioners, Mayor Libby Shaff, Nancy Skinner and the Democratic politicians in the legislature.
Add Your Comments
Support Independent Media
We are 100% volunteer and depend on your participation to sustain our efforts!