Add an Event
Newswire
Calendar
Features
Home
Donate
From the Open-Publishing Calendar
From the Open-Publishing Newswire
Indybay Feature
Publish to Newswire
Add an Event
Related Categories: Santa Cruz Indymedia | Environment & Forest Defense | Health, Housing & Public Services
Study Finds High Levels of Pesticide Exposure among Teenage Girls in California’s Salinas Valley
by Beyond Pesticides
Wednesday May 8th, 2019 3:16 PM
(Beyond Pesticides, April 26, 2019) Research by the youth participatory action team of the CHAMACOS of the Salinas Evaluating Chemicals in Homes and Agriculture (COSECHA) reveals that teenagers in the Salinas Valley, California are routinely exposed to concerning levels of multiple toxic pesticides, several of them known endocrine disruptors. In an interview with Kion News, COSECHA research director Kimberly Parra remarked that the study is especially important because teenagers are in a stage of rapid reproductive development. As the study authors emphasize, it is their developmental stage that makes teenagers more vulnerable to the effects of endocrine disrupting pesticides, with potentially devastating consequences for lifelong health. 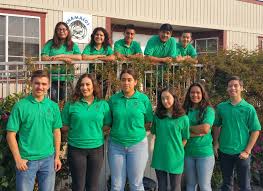 The COSECHA study quantifies exposure to 72 pesticides, captured through volatile-trapping silicone wristbands, across 97 teenage girls living in various areas of the Salinas Valley region. Of the 72 pesticides analyzed, authors report that subjects are exposed to as many as 20 and an average of 8 pesticides over one week of routine indoor and outdoor activity. Given the well-documented dangers of pesticide co-exposures, these multiple-exposure findings are particularly concerning.

Ranking the highest for prevalence among the studied pesticides is fipronil sulfide, a breakdown product of the insecticide fipronil, detected in 86.6% of the analyzed wristbands. Fipronil is a known endocrine disruptor and has been shown to disrupt thyroid function. It is classified by the U.S. Environmental Protection Agency (EPA) as a Group C (possible human) carcinogen. The World Health Organization (WHO) regards fipronil as “moderately toxic” to humans, and can, in large quantities, damage kidney, liver or thyroid gland. As the authors note, fipronil “has exhibited oncogenicity and neurologic toxicity in animal studies,” raising concerns for the 84 Salinas Valley girls whose wristbands turned out positive for the toxin, and for the 86.6% of children population-wide whose routine exposure levels the study reflects.

Among their findings, perhaps most concerning is the degree to which discontinued pesticides – including some that have been out of use for nearly five decades – are still detected at high frequency. DDE, a breakdown product of the long-banned organochlorine insecticide DDT, was detected in 55.7% of the wristbands.

While their findings carry an often repeated and all-too-often ignored message, the COSECHA Study has something distinct to offer – its community-based approach. A team of ten youth researchers participated in all aspects of the study, from devising research questions to surveying subjects, analyzing results, and interpreting their significance to the community.

The seeds of the COSECHA Study were first planted in 1999, when researchers at Berkeley’s Center for Environmental Research and Children’s Health embarked on what is now the longest running longitudinal birth cohort study of its kind – the Center for the Health Assessment of Mothers and Children of Salinas (CHAMACOS) Study. Titled after the term for “little children” in Mexican Spanish, the CHAMACOS program seeks to link maternal, prenatal, and childhood pesticide exposures to health outcomes among children living in California’s Salinas Valley. By now, CHAMACOS has tracked the health outcomes of over 800 children and published more than 150 papers on their public health findings.

But to some, the most important aspect of the program cannot be captured in numbers. The heart of CHAMACOS and, researchers attest, the reason for its long tenure, is the program’s dedication to community-based participatory research.

For one group of “CHAMACOS babies” especially, the project became more than just a regular check-in. In 2015, a group of Berkeley researchers aiming to involve youth in participatory action research had a revelation. “We went, wait a minute,” remarked Kim Harley, Ph.D. in an interview with Ensia. “The CHAMACOS kids are 14 years old now and we’re looking to enroll a bunch of 14-year-olds.” Together with the Salinas Valley Health Clinic (Clinica de Salud del Valle de Salinas), Berkeley researchers began to recruit CHAMACOS study subjects to join a Youth Council and effectively flip their roles, from the observed to the observers.

Within the year, a group of roughly one dozen original CHAMACOs participants had joined the CHAMACOS Youth Council and a new project was born: “Chamacos of Salinas Evaluating Chemicals in Homes & Agriculture,” or COSECHA, Spanish for harvest. These latest findings, and even more so the process young Salinas residents went through to arrive to the point of publication, can truly be thought of as the harvest of the CHAMACOS project.

All unattributed positions and opinions in this piece are those of Beyond Pesticides.