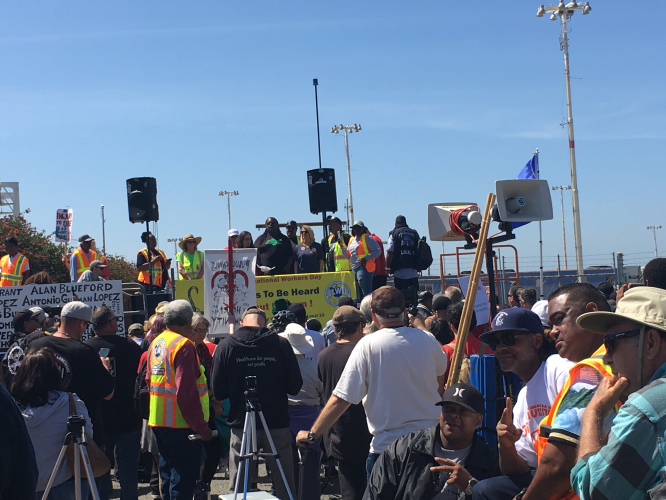 original image (4032x3024)
On May Day 2019 at the Howard Terminal in the Port of Oakland, OEA president Keith Brown talked about the role of the proposed A's stadium, the ILWU, port jobs and public education. He discussed the growing gentrification of West Oakland and the need for the port to provide funding for public education. The Oakland Education Association facing school closures and a massive increases of charter schools some of whom are funded by A’s owner John Fisher who with his family owns The GAP and runs the Rocketship and KIPP charter school chain. Dave Kava, manager of the A's is on the board of the Rocketship Charter School Chain. The plan of Fisher is not only to build a stadium on working port property but to build 4,000 condos costing more than $1 million each.

This was part of Pacifica May Day Programming with WorkWeek Radio
https://www.facebook.com/pacificaradiomayday

Whose Dock Is This? Our Dock! CWA AFA Pres Sara Nelson At Oakland Howard Terminal May Day 2019
https://youtu.be/rk0t_mTmErI


The Fisher family which owns the GAP corporation has been using their wealth to push full privatization of public education in California and nationally with the KIPP and Rocketship charter school chains which they control.

In San Francisco, the KIPP charter is busting up the Malcom X Academy in Hunters Point through the use of “co-location” in the reactionary proposition 39 funded by Netflix billionaire Reed Hastings and other education privatizers. Billionaire GAP owner

Doris Walker is on the board of KIPP San Francisco. She and her family instead of supporting public schools and public teachers are helping to pit student against student and break the UESF and other education unions through a two tier charter system for profit.
https://www.youtube.com/watch?v=GWAX0Hzb_JI

They are also using these so called “non-profit” schools to get tax subsidies to push privatization. They also then use their money to bankroll candidates in boards of education and other government positions and control the State Board of Education SBE and Commission on Teacher Credentialing CTC with is pushing “Common Core” and other corporate schemes to commodify education for profit. These charter school operatives also have massive financial conflicts of interests which need to be criminally prosecuted.
https://capitalandmain.com/gap-co-founder-doris-fisher-is-bankrolling-the-charter-school-agenda-and-pouring-dark-money-into-ca-politics

The Rocketship charter school chain is also seeking to break up public education in San Jose, West Contra Costa and Vallejo. They have lied to school boards and when some parents want to go to a school board meeting they have discovered that the Alum
Rock Rocketship school board was meeting in the GAP headquarters in SF during the day.
https://www.youtube.com/watch?v=S_jZAYnrR_Q
They even tried to privatize the Laney Community College by taking over the college land using their control of The A’s.

The A’s manager John Kaval is also on the board of Rocketship and the team is owned by billionaire GAP family member John Fisher who also supports charters and privatization and helps fund the California Charter School Association and union busting candidates throughout the state and nationally.
https://edsource.org/2012/25-million-gift-to-make-bay-area-center-for-blending-online-instruction-into-school-day/21484

The GAP corporation was also given a $13 million subsidy by the Newsom to build their headquarters on the waterfront while kids in San Francisco are short changed.
The so called “non-profits” also subject the students to conditions that are clinically dangerous and use them as testers of new education software technology to benefit the tech barons and also eliminate teachers. This is part of the drive pushed by Governor Jerry Brown and the corporate shills to put all education on line. It’s time to call a halt on Rocketship & KIPP charters and repeal the California Charter School Law to STOP siphoning off public money to charters.


Dave Kaval is the seventh and current President of the Oakland Athletics of Major League Baseball. Kaval has implemented a number of initiatives to connect with fans and community stakeholders, including hosting weekly office hours, participating in town hall meetings, posting blog and Facebook Live updates and communicating via social media. Kaval previously served as president of the San Jose Earthquakes, a Major League Soccer franchise. Kaval’s efforts with the Earthquakes led to the groundbreaking on an 18,000-seat, privately financed stadium in San Jose, increase in sponsorship, ticket sales and merchandise revenue and a team that finished with the best record in Major League Soccer during the regular season. Kaval helped the Earthquakes navigate the permit approval process for the stadium and helped organize and contribute to a number of community events with the San Jose Earthquakes. The soccer club has visited more than 55 schools and interacted with more than 10,000 students through community programs. Prior to joining the Earthquakes, Kaval founded the Golden Baseball League (GBL) in 2003 with fellow Stanford Business School graduate Amit Patel. Kaval was responsible for raising the initial capital to launch the league, launching the charter teams, and building an entire League from scratch. He also negotiated a number of major corporate partnerships, including the multi-million dollar league naming rights agreement with Safeway. Kaval earned a B.A. in 1998 with honors in International Relations and an M.B.A. in 2003 from Stanford University. He is a long time resident of Menlo Park and lives there with his wife and two daughters.
https://youtu.be/uZB-hG5hw0c
§Billionaire A's Owner John Fisher And Kaval Pushed Rocketship Charter in WCCSD
by Labor Video Project Sunday May 5th, 2019 5:25 PM 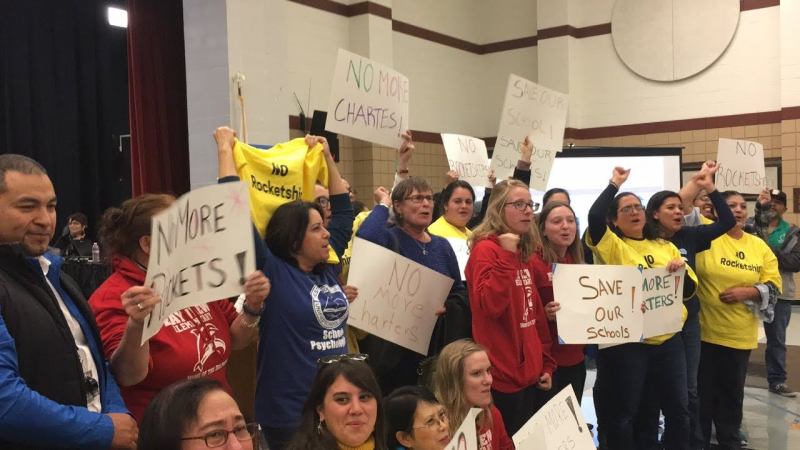 original image (1280x720)
Billionaire John Fisher who owns the GAP and controls Rocketship and KIPP charter school chains was pushing for a Rocketship charter in WCCSD. They are shutting public schools and siphoning off public money to his privately run schools for profits.
https://youtu.be/uZB-hG5hw0c
§Fisher's A's Manager On Board of Rocketship Charter Schools
by Labor Video Project Sunday May 5th, 2019 5:25 PM 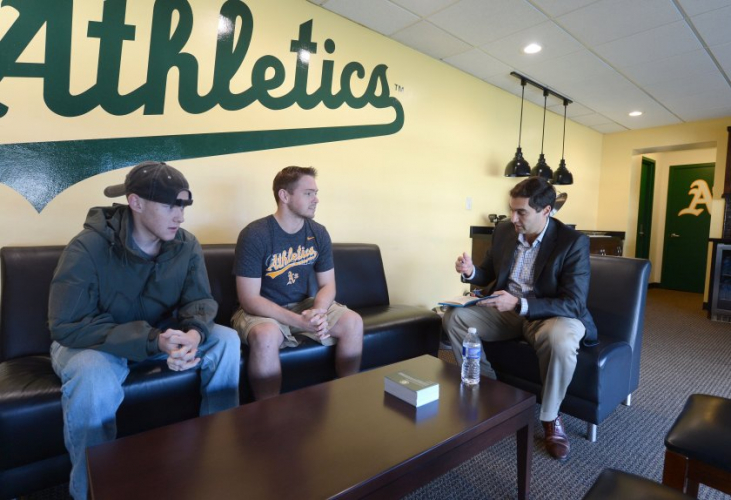 original image (840x574)
Dave Kaval who is billionaire John Fisher's manager of the A's is fully invested in union busting and privatization. He is on the board of the Rocketship Charter School chain which is busting up public schools in the bay area and throughout the country. In Oakland Kaval and the Fisher family which owns the GAP are pushing for more charters and co-locations in Oakland while supporting gentrification and land grabs like the effort to steal Laney college land.
https://youtu.be/uZB-hG5hw0c
§Breaking Up The Port For More Profiteering
by Labor Video Project Sunday May 5th, 2019 5:25 PM 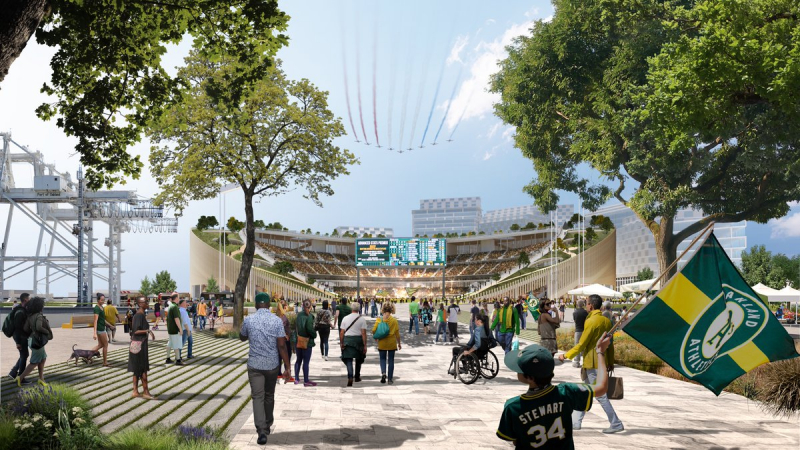 original image (1200x675)
Oakland Mayor Libby Shaft with the support of Democratic State Senator Nancy Skinner are doing the bidding of Billionaire John Fisher by pushing for the stadium on working port land and also supporting 4000 $1 million condos. This will wipe out the African American community in West Oakland and drive out more working people from their communities but billionarie Fisher and his family want it.
https://youtu.be/uZB-hG5hw0c
§Fisher And Company Want More Coporatization of Education
by Labor Video Project Sunday May 5th, 2019 5:25 PM 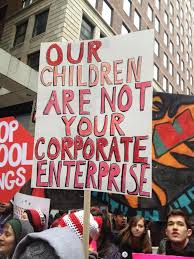 While Billionaire John Fisher and his family get more tax deductions on their massive wealth they use it to fund the California Charter School Association and push for corporatization of education.
https://youtu.be/uZB-hG5hw0c
Add Your Comments
Support Independent Media
We are 100% volunteer and depend on your participation to sustain our efforts!