Add an Event
Newswire
Calendar
Features
Home
Donate
From the Open-Publishing Calendar
From the Open-Publishing Newswire
Indybay Feature
Publish to Newswire
Add an Event
Related Categories:
Press Freedom Day UK Embassy and the Federal Building San Francisco Stream
by International Labor Media Network
Saturday May 4th, 2019 1:45 PM
On World Press Freedom Day supporters of Julian Assange and Chelsea Manning and all journalists and whistleblowers rallied in San Francisco at the UK consulate and the US Federal Building. They spoke out about the attacks on journalism and the role of US imperialism. This was streamed live on the International Labor Media Network Channel 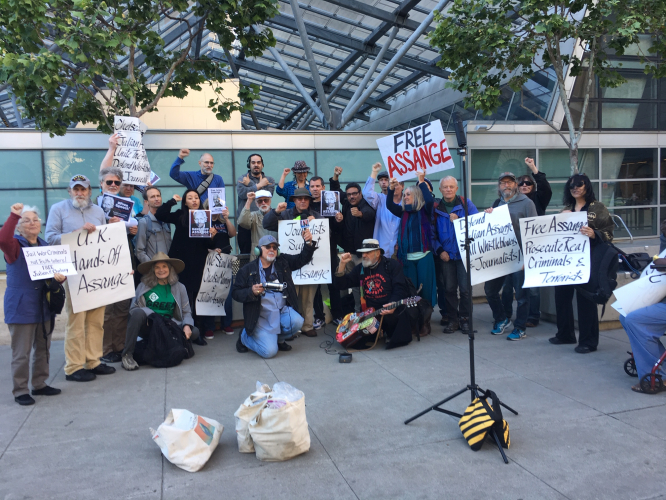 Forty to fifty supporters of World Press Freedom Day joined the rally at the UK Consulate in San Francisco and marched to the US Federal Building. There were also over a dozen speakers including journalists and trade unionists who spoke out in support of Julian Assange and Chelsea Manning. It was broadcast live on the International Labor Media Network.
On the same day the International Federation of Jounalists IFJ joined the call for the freedom of Julian Assange. They represent journalists from throughout the world.

https://www.ifj.org/media-centre/news/detail/category/press-releases/article/ifj-executive-committee-adopts-motion-in-support-of-julian-assange.html?share
02 May 2019
The IFJ Executive Committee supports our Australian affiliate MEAA in its opposition to US moves for the extradition of Julian Assange.


Daniel LEAL-OLIVAS / AFP
Any extradition and prosecution by US authorities would be a clear attack on the principles of press freedom.

We call on the UK and Australian Governments to oppose any US extradition application.


On World Press Freedom Day Friday May 3, 2019 join the rallies and marches around the world and in San Francisco to FREE Julian Assange and Chelsea Manning and all jailed journalists and whistleblower

Rally At US Federal Building
5:15 PM

https://ilmnetwork.org/2019/05/03/press-fr...
Add Your Comments
Support Independent Media
We are 100% volunteer and depend on your participation to sustain our efforts!