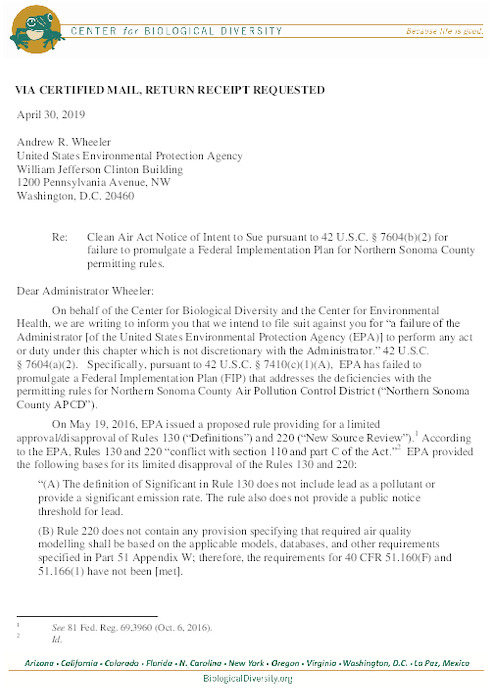 Download PDF (235.5KB)
California has repeatedly submitted air-permitting rules for northern Sonoma County that failed to include emission standards for lead, a deadly neurotoxin. Under the Clean Air Act the EPA is required to develop air-quality plans when states submit deficient plans. The plans are designed to help states keep their air pollution below federal limits.

“The EPA needs to act expeditiously and develop new permitting rules that will protect our communities from the irreversible effects of lead poisoning,” said Caroline Cox, a senior scientist at the Center for Environmental Health. “Young children and pregnant women are particularly vulnerable to lead exposure and deserve regulations that provide the highest protections available.”

Lead pollution is a serious problem in northern Sonoma County, where several local airports, including the Sea Ranch, Healdsburg Municipal and Cloverdale Municipal, service small piston-engine powered aircrafts typically used for corporate and private travel. Such planes use aviation gas, the only remaining type of gasoline containing lead. According to the EPA, the more than 167,000 piston-engine planes in operation are responsible for nearly half of all lead emissions nationwide.

“There’s no excuse for allowing small planes to continue to poison Sonoma County’s air,” said Robert Ukeiley, an attorney at the Center for Biological Diversity. “The EPA needs to take immediate steps to reduce the dangerous threats posed by toxic lead.”

A 2011 Duke University study reported that as far back as 2010, EPA research showed that “the lead in air surrounding airports can be inhaled directly, or the lead may be ingested by children after it settles into soil or dust.”

The Duke study found that higher levels of lead were detected in North Carolina children living within half a mile of an airport where planes use leaded gas. The study concluded there was a “significant association” between leaded aviation fuel and higher blood lead levels in children.

Lead is a heavy metal that can persist in the environment indefinitely. Continuous exposure causes it to accumulate in the body’s organs and bones. Short-term exposure to lead can result in abdominal pain, constipation, fatigue, headaches, irritability, loss of appetite, memory loss, pain or tingling in the hands or feet and weakness. Long-term exposure can result in kidney and brain damage, hypertension, impairments to the immune and reproductive systems and even death.

Lead poisoning is also a threat to wildlife. Northern Sonoma County is home to endangered steelhead trout, as well as protected coho and Chinook salmon, which rely on the Russian River to spawn. The successful recovery and health of the Chinook salmon is critically important to Southern Resident killer whales, which depend almost exclusively on the fish as their food.

The Center for Environmental Health works with parents, communities, businesses, workers and government to protect children and families from toxic chemicals in homes, workplaces, schools and neighborhoods.