Will you send him a message today and ask him to stop Brazil’s genocide? 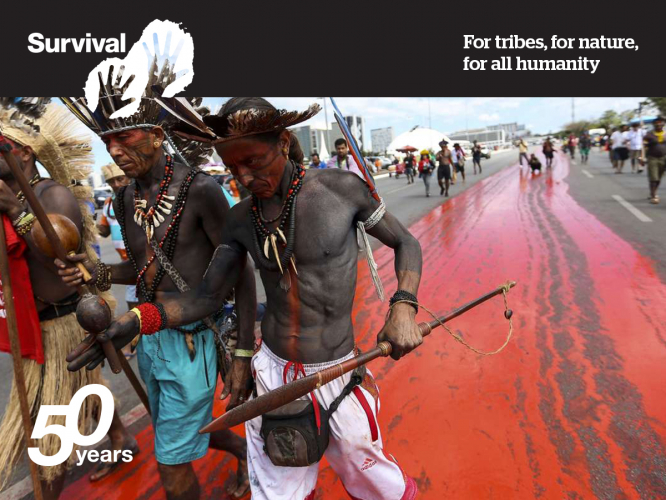 These moves spell disaster for tribal peoples nationwide and could wipe out dozens of uncontacted tribes.

But across the country, indigenous peoples are fighting back. They won’t let anyone steal their land, because without it they can’t survive.


Stephen Corry
Director
Send a pre-written email
If the button doesn't work for you, please write your own email using the details below.
If you have time to adapt the text it'll make even more impact.

I respectfully urge you to uphold Brazil’s constitution and the international laws Brazil has ratified, and ensure that indigenous territories are protected from illegal invasions and outside intervention, for the indigenous peoples’ exclusive use.

This includes the land of uncontacted tribes. Brazil is home to more uncontacted peoples than anywhere else on the planet. Their land must be protected to prevent their genocide, and to allow them to survive and thrive.

Brazil’s first peoples are at the core of your nation and their survival is of importance to all humanity.

I echo the demands of indigenous people across Brazil: Please allow FUNAI to protect indigenous territories, and ensure that indigenous rights are fully upheld.


P.S. We take no money from governments or big corporations so our integrity is never compromised. We rely entirely on your donations to keep fighting for tribal peoples worldwide. Please donate today. Without you, there can be no Survival.

Since 1969 | Supporters in over 100 countries
Offices in Berlin, London, Madrid, Milan, Paris and San Francisco