Add an Event
Newswire
Calendar
Features
Home
Donate
From the Open-Publishing Calendar
From the Open-Publishing Newswire
Indybay Feature
Publish to Newswire
Add an Event
Related Categories: California | Central Valley | Santa Cruz Indymedia | Environment & Forest Defense | Government & Elections
Judge fines pipeline company $3.3 million for 2015 Santa Barbara oil spill
by Dan Bacher
Sunday Apr 28th, 2019 12:34 AM
Missing from the press releases from the Santa Barbara County DA’s Office, Attorney General’s Office and environmental groups and the superficial press coverage of the spill, the investigation, the jury trial and sentencing is one of the biggest and most ironic stories regarding the Refugio Oil Spill. In a classic example of the deep regulatory capture that pervades what passes for “marine protection” in California, the head of the oil industry trade association, the Western States Petroleum Association (WSPA), that lobbies for the Plains All American Pipeline corporation happens to be the very same “marine guardian” who chaired the panel that created the so-called "marine protected areas" that were fouled by the spill. 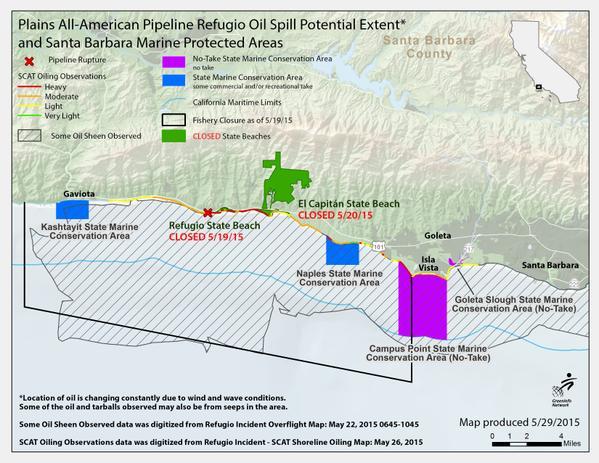 Santa Barbara County District Attorney Joyce E. Dudley and environmental groups were disappointed that the Judge did not grant the DA’s request to impose a larger fine of $1.2 billion on the company.

“While the Court made findings including that Plains knew or should have known their pipeline would rupture, stating that ‘[i]t was not a matter of if, but a matter of when,’ Judge Herman denied the People’s request to impose probation and for a significantly larger fine,” according to a statement from the DA’s Office. The Court retained jurisdiction over restitution for victims, and the next hearing on that issue will be held on July 10, 2019.

“This assault on our community,” said Dudley, “correctly resulted in a historic felony conviction as a result of the Herculean efforts of Deputy District Attorney Kevin Weichbrod and the extraordinary team of Deputy Attorney Generals led by Brett Morris. Still, without the insight, fortitude and hard work of our jury, this success could have evaded our community.”

“Plains All American Pipeline’s criminal behavior was responsible for the oil leak that despoiled our coastline and endangered our environment,” added Attorney General Becerra. “My office has zero tolerance for these types of criminal acts. I am proud of our prosecution team who helped to bring a measure of justice for the massive loss that the Santa Barbara community endured.”

The sentencing was originally scheduled for December 13, 2018, but the judge delayed it until April after the pipeline company, a member of the Western States Petroleum Association (WSPA), asked for the delay.

On May 19, 2015, a highly-pressurized pipeline operated by Plains to transport crude oil drilled from offshore oil wells ruptured on shore just north of Refugio State Beach in Santa Barbara County, bringing back memories of the Santa Barbara Oil Spill of 1969 that was a catalyst for the modern environmental movement.

Evidence presented at the trial demonstrated that over 140,000 gallons of crude oil was released from the pipeline, spilling crude oil into the Pacific Ocean, despoiling local beaches and fouling four “marine protected areas” created under the privately-funded Marine Life Protection Act (MLPA) Initiative.

Testimony at the trial revealed that over 100,000 gallons of crude oil was never recovered. “Local, state, and federal agencies led efforts to protect natural habitats and to try to address the residual hazardous materials remaining along the coast,” according to the Attorney General’s Office.

On September 7, 2018, a Santa Barbara County jury reached a verdict finding Plains guilty of failing to properly maintain its dangerous, highly-pressurized pipeline that led to the discharge of crude oil into the Pacific Ocean, a felony.

“The jury also found Plains guilty of eight misdemeanor charges including one count of failing to follow its own spill plan and notify emergency response agencies, six counts of killing marine mammals, protected sea birds, and other marine life, and one count of violating a county ordinance prohibiting oil spills,” the A.G.’s Office reported.

Plains All American has publicly apologized for the spill. “We take our responsibility to safely deliver energy resources very seriously, and we are committed to doing the right thing,” Brad Leone, director of communications and government relations for Plains all American, said in a prepared statement emailed to The San Luis Obispo Tribune. “We are sorry that this release happened, and we have and will continue to work hard to re-earn the trust of area residents,” https://www.sanluisobispo.com/news/local/environment/article229699179.html#storylink=cpy

Environmental groups said Plains All American deserved a “tougher sentence” — and oppose a new pipeline Plains has applied to build in the same location to bring offshore wells back online. ExxonMobil is also seeking permits to restart its three offshore platforms and transport that oil by tanker trucks along California’s coastal highway.

The spill shuttered seven offshore drilling platforms served by the pipeline, Line 901, according to a news release from environmental groups.

“Plains’ criminal negligence deserved a tougher sentence, but even more important is that the company doesn’t deserve another chance to spill again,” said Blake Kopcho, an oceans campaigner at the Center for Biological Diversity.

Before the Judge issued his sentence, prosecutors recounted how Plains caused the spill and delayed reporting it to authorities, according to Kopcho. The court also heard from victims harmed by the spill, including local property owners, fishermen and workers affected by the platform shutdowns.

"Opposition to offshore oil is at record highs in California and this verdict — and the damage done by Plains' spill — shows why. Time and again we're told oil drilling is safe and, and time and again that is proven not to be the case,” said Katie Davis, chair of the Sierra Club Los Padres Chapter. “Santa Barbara won't be fooled again. Trucking is the least safe way of transporting oil, and the very last thing we should be considering given our spill history and accelerating impacts from climate change.

Missing from the press releases from the Santa Barbara DA’s Office, Attorney General’s Office and environmental groups and the superficial press coverage of the spill, the investigation, the jury trial and sentencing is one of the biggest and most ironic stories regarding the Refugio Oil Spill.

Yet not one government official, NGO representative or reporter (except this one) mentioned that the head oil industry lobbyist promoting the expansion of offshore drilling and opposing legislation increasing protection of the California coast was the same state official who headed the panel to create faux Southern California “marine protected areas” that don’t protect the ocean from fracking, offshore drilling, pollution, seismic testing and human impacts on the ocean other than sustainable fishing and gathering.

Meanwhile, Plains All American CEO Greg Armstrong raked in more than $5 million in compensation in 2014 and was guaranteed $29 million to $87 million in golden parachute cash despite the fact that oil from a rupture in his company's shoddy pipeline polluted the beaches and ocean waters for 9 miles off the Santa Barbara County coastline.

Big Oil is the biggest and most powerful corporate lobby in Sacramento — and the Western States Petroleum Association (WSPA) is the biggest and most powerful lobbying organization. Big Oil, along with corporate agribusiness, developers, big water agencies, timber companies, and other Big Money interests, has captured the regulatory apparatus in California. For more information, read this piece: http://www.dailykos.com/...
Add Your Comments
Support Independent Media
We are 100% volunteer and depend on your participation to sustain our efforts!