Newswire
Calendar
Features
Home
Donate
From the Open-Publishing Calendar
From the Open-Publishing Newswire
Indybay Feature
Publish to Newswire
Add an Event
Related Categories: Santa Cruz Indymedia | Health, Housing & Public Services
Federal Judge Orders City of Santa Cruz to Halt Closure of Ross Camp
by Santa Cruz News
Tuesday Apr 23rd, 2019 11:01 PM
Today Federal Judge Edward Davila granted the plaintiffs suing the City of Santa Cruz in Quintero v. City of Santa Cruz a restraining order that prevents the city from removing, seizing, or destroying the property of the homeless residents of the Ross Camp until the matter can be heard on Friday in federal court. Quintero et al v. City of Santa Cruz et al, a historic lawsuit filed by a group of homeless residents living at the Ross/Heroes' Camp, is the first lawsuit of its kind initiated by homeless individuals after the Martin v Boise ruling of September 2018, which states that homeless persons cannot be punished for sleeping outside on public property in the absence of adequate alternatives.
Copy the code below to embed this movie into a web page:
Download Video (48.7MB) | Embed Video
City Attorney Anthony Condotti interupted today's Santa Cruz City Council meeting to inform councilmembers about the restraining order issued by Judge Davila, and that any decisions council made about the Ross Camp would be put on hold until Friday's hearing, which will take place in Judge Davila’s court in San Jose at 9:00 am.


More information about the efforts of the Ross/Heroes' Camp residents can be found at: 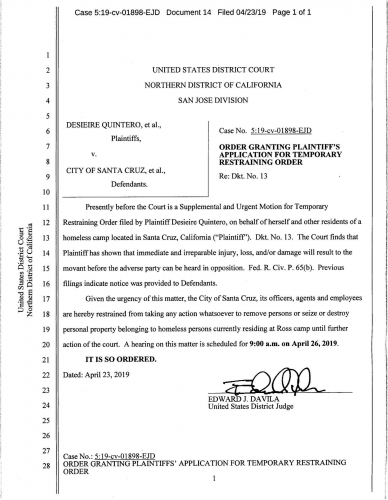