Your proposed Item 13 if implemented would be illegal as I am sure you are aware. It does not provide shelter for hundreds of community members who live outside. It will increase the suffering of those who will be forced to seek shelter in the doorways, yards, and parks of our city where they will face the violence of those who support the elimination of the poor from our city.

For example, a woman who ate with Food Not Bombs last weekend told of being kicked in the head that week while finding shelter in a doorway. The man yelled at her to leave town and called her many abusive names as he beat her. Had she live at Heros Camp behind Ross she would have been safe as attested by the many women who live there. Her story is but one of the many people who report violence as a result of the City’s campaign of hate.

Item 13 does not provide a compassionate solution to this crisis. It proposes to let hundreds of people seek shelter in the doorways and parks of our city where the police will be waking and citing them. Business and property owners are likely to be frustrated to find that people were not able to find a toilet encouraging more violence and hate against those who live outside.

If you vote for Item 13 you will send a loud message that elections do not matter. That those we support for office will side with corporate power and hate once in office. I am hearing from many of those who supported your campaign that they share my disappointment. It is possible that direct action and rebellion is the only way the poor and unhoused can defend their rights.

Please vote against Item 13 and take a stand against hate and violence. Support real solutions to those who have to find shelter behind Ross.
§Flyer Outlining Meetings
by Robert Norse (rnorse3 [at] hotmail.com) Sunday Apr 21st, 2019 4:57 PM 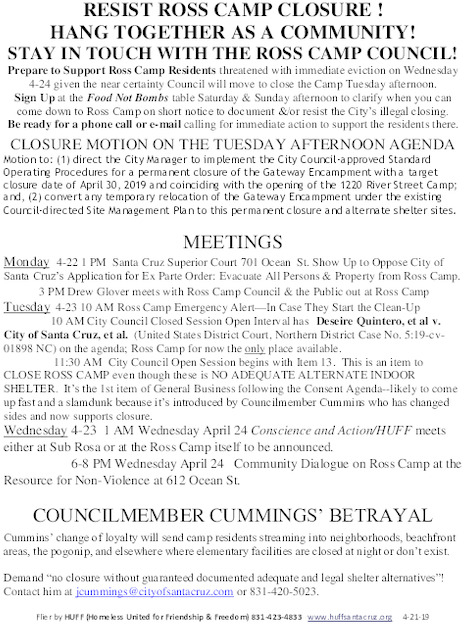 Download PDF (636.1KB)
RESIST ROSS CAMP CLOSURE !
HANG TOGETHER AS A COMMUNITY!
STAY IN TOUCH WITH THE ROSS CAMP COUNCIL!

Prepare to Support Ross Camp Residents threatened with immediate eviction on Wednesday 4-24 given the near certainty Council will move to close the Camp Tuesday afternoon.

Sign Up to clarify when you can come down to Ross Camp on short notice to document &/or resist the City’s illegal closing. E-mail rnorse3 [at] hotmail.com.

Be ready for a phone call or e-mail calling for immediate action to support the residents there when the eviction order comes.

CLOSURE MOTION ON THE TUESDAY AFTERNOON AGENDA
Motion to: (1) direct the City Manager to implement the City Council-approved Standard Operating Procedures for a permanent closure of the Gateway Encampment with a target closure date of April 30, 2019 and coinciding with the opening of the 1220 River Street Camp; and, (2) convert any temporary relocation of the Gateway Encampment under the existing Council-directed Site Management Plan to this permanent closure and alternate shelter sites.

Tuesday 4-23 10 AM Ross Camp Emergency Alert—In Case They Start the Clean-Up
10 AM City Council Closed Session Open Interval has Deseire Quintero, et al v. City of Santa Cruz, et al. (United States District Court, Northern District Case No. 5:19-cv-01898 NC) on the agenda; Ross Camp for now the only place available.
11:30 AM City Council Open Session begins with Item 13. This is an item to CLOSE ROSS CAMP even though these is NO ADEQUATE ALTERNATE INDOOR SHELTER. It’s the 1st item of General Business following the Consent Agenda--likely to come up fast and a slamdunk because it’s introduced by Councilmember Cummins who has changed sides and now supports closure.

Cummins’ change of loyalty will send camp residents streaming into neighborhoods, beachfront areas, the pogonip, and elsewhere where elementary facilities are closed at night or don’t exist.

http://huffsantacruz.org
Add Your Comments
LATEST COMMENTS ABOUT THIS ARTICLE
Listed below are the latest comments about this post.
These comments are submitted anonymously by website visitors.