Add an Event
Newswire
Calendar
Features
Home
Donate
From the Open-Publishing Calendar
From the Open-Publishing Newswire
Indybay Feature
Publish to Newswire
Add an Event
Related Categories:
May 3rd Day Of Action For Journalists &Whistleblowers -Stand Up For Assange & Manning
by World Press Freedom Day Of Action 2019
Tuesday Apr 16th, 2019 3:06 AM
On World Press Freedom Day on May 3 actions will take place around the world to demand the freedom of Journalist Julian Assange, Whistleblower Chelsea Manning and all jailed journalists and whistleblowers 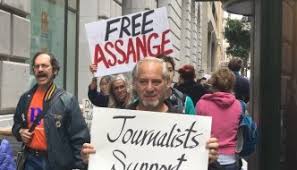 World Press Freedom Day Of Action 2019
May 3rd Day Of Action For Journalists and Whistleblowers -Stand Up For Julian Assange, Chelsea Manning and others
https://freepressday2019.wordpress.com/day-of-action/

Day of Action Call Out

On May 3, 2019, join World Press Freedom Day Of Action for Journalists and Whistleblowers to Stand Up For Julian Assange and Chelsea Manning

May 3rd is recognized around the world as a day to defend journalists. The growing attacks on journalists by governments throughout the world is putting them and all whistleblowers under threat. There continue to be not only threats against journalists but torture and murders.

The establishment of WikiLeaks by Julian Assange provided an important vehicle for understanding the crimes and corruption of governments and corporations. The information allegedly provided by whistleblower Chelsea Manning to WikiLeaks provided a historic opportunity for people to see how the real criminals operate on a global level. Foremost was exposing the role and crimes of US imperialism and in particular its numerous war crimes in the Middle East including against civilians and journalists in Iraq.

The effort to “kill the messenger” has led to an effort to intimidate, bully and threaten all journalists not to report on documents that expose these war crimes and illegal activities. Whistleblowers are also being intimidated to stay quiet about information that exposes the imperialist governments and corporations that control governments around the world.

There has also been an international effort to censor the internet and block information as Google, Facebook and other social media platforms control the flow of information. This censorship of news and information is being justified as preventing right-wing racist and xenophobic “hate speech” to prevent violence but its real intent is to shut down left-wing media and to silence those exposing the role of governments the world.

In the United States both the Democrats and Republicans have been directly implicated in these war crimes but there has been no investigation and prosecution of the government officials responsible for these acts. Instead both political parties have sought to blame the journalists and whistleblowers for exposing these activities. For example, the only people charged over the crimes of the NSA and the CIA are the whistleblowers such as Thomas Drake and John Chris Kiriakou who exposed them whilst Edward Snowden has been forced into exile. More whistleblowers were prosecuted under the Espionage Act under the Obama President than under all previous presidents combined.

The Trump presidency has seen attacks on the press increase. He called the press ‘scum’ and ‘enemies of the people’. This is the language of fascism and the history of Hitler and the Nazis are replete with these same kind of attacks. In the In the U.S. this has led to a febrile atmosphere that has witnessed journalists being assaulted at Trump’s rallies and pipe bombs sent to media outlets.

The role of labor and unions is critical. The International Federation of Journalists (IFJ) and journalists in many countries around the world have sought to protect the media from these escalating attacks from Turkey, Palestine, Saudi Arabia, Mexico, China, the U.S., Russia and Colombia.

We support these unions in their efforts to protect journalists and we urge you to get your union organization to support this day of action and also to educate your members about these issues.

However whilst speaking out in defence of journalists globally, in the case of Julian Assange, Chelsea Manning and Wikileaks, the IFJ internationally and the MEAA in Australia have not made a public statement since 2011. The silence on these matters must be challenged and broken by workers and unionists throughout the world.

The San Francisco Labor Council acted in February to defend Julian Assange and previously it defended Assange and Manning but we need to expand support for these actions globally.

We intend for the May 3rd to be an important part of this mobilisation. We therefore :

Call on all workers and unions to organise where possible events and protests on May 3rd internationally to defended targeted journalists and whistleblowers in their country and globally. Announced events listed here

Call on all workers and unionists to pass a motions in their workplaces and organisations endorsing the 2019 World Press Freedom Day Of Action For Journalists and Whistleblowers: Stand Up For Julian Assange and Chelsea Manning. We can then add your endorsement to promotion of the day.

To either let us know about an endorsement or protest please contact:
In the US: WorkweekRadio workweek [at] kpfa.org or worldpressfreedomday(at)protonmail.com

Marcus Stromm, President of the Australian media union (MEAA) explaining in the face of hostile questioning on Australian TV why Assange's prosecution is a threat to the free press. Assange is a member of the Australian Union Media, Entertainment and Arts Alliance Union.
https://twitter.com/theprojecttv/status/1117347645805277184
https://www.facebook.com/watch/?v=2649959828379442

SF Trade Unionists & SFLC Delegates Speak Out On The Case Of Julian Assange
https://www.youtube.com/watch?v=mujVU2Y5PAo&t=22s
At a San Francisco Labor Council meeting on February 11, 2019 delegates discussed and debated a resolution in support of the freedom for Julian Assange. Trade unionists after the meeting discussed why they were supporting the defense of Assange.
Additional Info:
02/04/19 Resolution in Support of the Journalist & WikiLeaks Founder Julian Assange
http://sflaborcouncil.org/wp-content/uploads/2019/02/02-04-19Resolution-in-Support-of-the-Defense-of-WhistleblowerAssange..pdf
Australian Unions Support Julian Assange
http://global-labour.info/en/2010/12/24/australian-unions-support-julian-assange-2010/
Leaked Wikileaks Doc Reveals US Military Use of IMF, World Bank as “Unconventional” Weapons This “U.S. coup manual,” recently highlighted by WikiLeaks, serves as a reminder that the so-called “independence” of such financial institutions as The World Bank and IMF is an illusion and that they are among the many “financial weapons” regularly used by the U.S. government to bend countries to its will.
https://www.mintpressnews.com/leaked-wikileaks-doc-reveals-how-us-military-uses-of-imf-world-bank-as-unconventional-weapons/254708/?fbclid=IwAR0q4aXLMco2D_b_3p7z3qygYD1SxHfZ0DDpKBog2_tYCqh4wDED73xLCjI#.XF49-vT0atU.facebook
UN experts urge UK to honour rights obligations and let Mr. Julian Assange leave Ecuador embassy in London freely
https://www.ohchr.org/EN/NewsEvents/Pages/DisplayNews.aspx?NewsID=24042&LangID=E
German Parliamentarians Call For Julian Assange's Freedom
https://soundcloud.com/kpfa-fm-94-1-berkeley/german-parliamentarians-visit-julian-assange-and-join-the-un-in-calling-for-his-freedom
Production of WorkWeek Radio
workweek [at] kpfa.org
https://soundcloud.com/workweek-radio
Production of Labor Video Project
http://www.laborvideo.org
https://freepressday2019.wordpress.com/day...
§Free Speech Except For Those Exposing War Crimes
by World Press Freedom Day Of Action 2019 Tuesday Apr 16th, 2019 3:06 AM 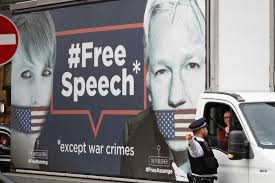 Julian Assange and Chelsea Manning exposed US war crimes and that is a critical reason the UK and US government are intent on jailing them for life.
https://freepressday2019.wordpress.com/day...
§SF Labor Council Resolution In Support Of Julian Assange
by World Press Freedom Day Of Action 2019 Tuesday Apr 16th, 2019 3:06 AM 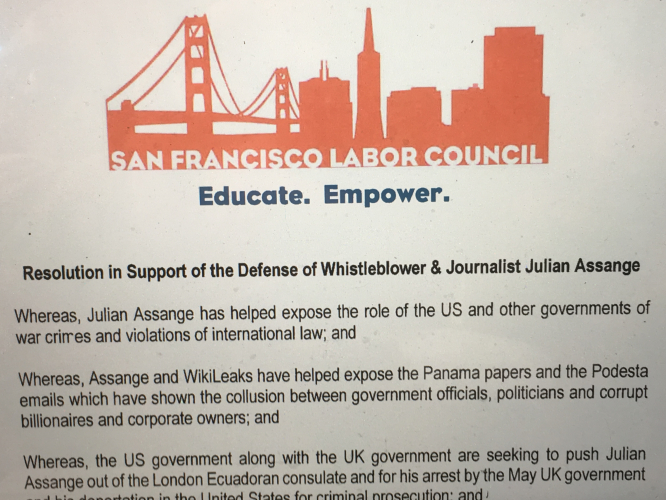 https://freepressday2019.wordpress.com/day...
Add Your Comments
Support Independent Media
We are 100% volunteer and depend on your participation to sustain our efforts!