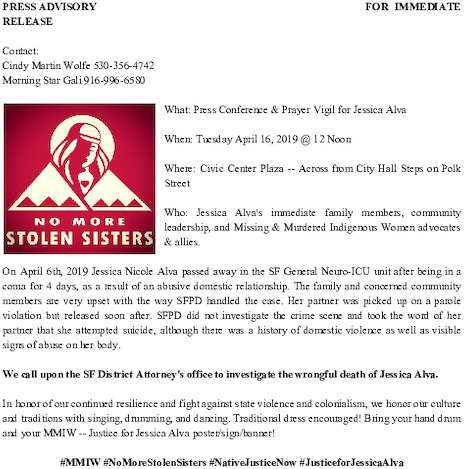 Download PDF (338.7KB)
Contact: Cindy Martin Wolfe 530-356-4742 Morning Star Gali 916-996-6580 PRESS ADVISORY FOR IMMEDIATE RELEASE What: Press Conference & Prayer Vigil for Jessica Alva When: Tuesday April 16, 2019 @ 12 Noon Where: Civic Center Plaza -- Across from City Hall Steps on Polk Street Who: Jessica Alva's immediate family members, Local Native American community leadership, and Missing & Murdered Indigenous Women advocates & allies. On April 6th, 2019 Jessica Nicole Alva passed away in the SF General Neuro-ICU unit after being in a coma for 4 days, as a result of an abusive domestic relationship. The family and concerned community members are very upset with the way SFPD handled the case. Her partner was picked up on a parole violation but released soon after. SFPD did not investigate the crime scene and took the word of her partner that she attempted suicide, although there was a history of domestic violence as well as visible signs of abuse on her body. We call upon the SF District Attorney's office to investigate the wrongful death of Jessica Alva. In honor of our continued resilience and fight against state violence and colonialism, we honor our culture and traditions with singing, drumming, and dancing. Traditional dress encouraged! Bring your hand drum and your MMIW -- Justice for Jessica Alva poster/sign/banner! #MMIW #NoMoreStolenSisters #NativeJusticeNow #JusticeforJessicaAlva ###
Add Your Comments
Support Independent Media
We are 100% volunteer and depend on your participation to sustain our efforts!