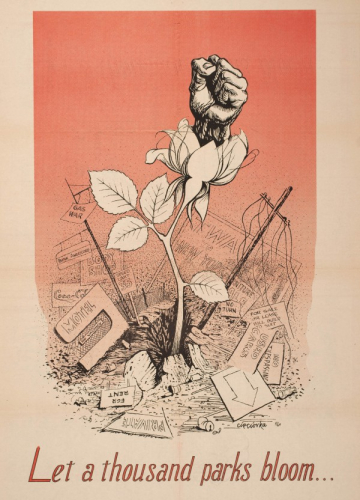 Import event into your personal calendar
Date:
Saturday, April 13, 2019
Time:
12:00 PM - 5:00 PM
Event Type:
Party/Street Party
Organizer/Author:
Save Peoples Park
Location Details:
People’s Park
2556 Haste St
Berkeley, CA 94704
BERKELEY — People’s Park has been a site of continual struggles for decades. Students and demonstrators had taken over the park from the University of California, Berkeley, as a grounds for activism and protests.

In 1969, then governor Ronald Reagan tried to evict protestors through use of overwhelming force, despite promises of university officials that there would not be attempts to clear the park. In the ensuing confrontations a student, James Rector, lost his life during the struggle.

In the following decades, the university has tried again on numerous occasions to develop the park, but People’s Park continues to be a staging ground for protests and community activists.

In honor of the People’s resistance, we are having a two-week celebration of the 50th Anniversary of People's Park! Come celebrate 50 years of public open space, free speech, and resistance.

Join us for a free concert to kick off our two-week celebration on Saturday, April 13, 2109. There will be tree planting, spoken word, and inspiring activist speakers in People's Park.

Bands Performing: Yukon Hannibal, The Yosemitones, Hali Hammer and Friends, Country Joe, and The Garthwaites (of Joy of Cooking)

After-hours Free Speech Stage (no amplification): an open-mic without the mic, open to all, no hate speech.


Join us for music, fun, and free speech galore!
END_OF_DOCUMENT_TOKEN_TO_BE_REPLACED
Added to the calendar on Fri, Apr 12, 2019 8:56PM
Add Your Comments
Support Independent Media
We are 100% volunteer and depend on your participation to sustain our efforts!