Add an Event
Newswire
Calendar
Features
Home
Donate
From the Open-Publishing Calendar
From the Open-Publishing Newswire
Indybay Feature
Publish to Newswire
Add an Event
Related Categories: Santa Cruz Indymedia | Police State & Prisons
Chief Mills to 'Present' BearCat to Public
by Santa Cruz Police News
Wednesday Apr 10th, 2019 7:59 PM
In an email to the Santa Cruz Police Chief’s Advisory Committee, it was announced that Police Chief Andrew Mills is planning to host a community presentation of the Santa Cruz Police Department's BearCat (Ballistic Engineered Armored Response Counter Attack Truck) on May 4. The vehicle was purchased by SCPD with the approval of the Santa Cruz City Council in 2015, despite large protests from the community over the militarization of police. 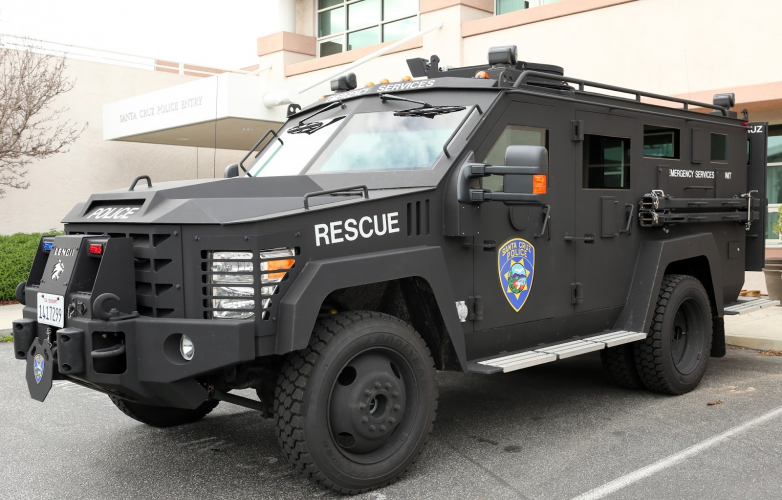 original image (1600x1022)
Lee Brokaw, an anti-war and police accountability activist in Santa Cruz who protested the purchase of the BearCat in 2015, wrote Chief Mills the following letter opposing the community presentation:

This 'demonstration' of the Bearcat runs contrary to how you presented your values, when you were a candidate of Chief. You explicitly described how you sent back an MWRAP from Eureka PD. We, who voted for your hire, would like similar dedication to the demilitarization of SCPD.

Please do not follow through with this public display. If there was one thing Sherry Conable stood for it was the demilitarization of SCPD. She still has great support for her dream of peace and demilitarization. Her followers are as dedicated to her goals today, maybe even more than ever. I expect objections from many others besides myself.

To be more specific: I object to 'presenting the Bearcat'.

It was purchased, as I observed and understood, because it was needed for tactical situations. Those of us in the Veteran community pleaded with the City to not buy this war-machine, and we will oppose its use for other than necessary tactical situations.

Any kind of 'presentation', 'orientation', or 'display' of the Bearcat in other than tactical situations, is "normalizing/conditioning" the community to accept military vehicles in the City. This goes against the expressed wishes of the community, as expressed to the City, in what 'little' debate-time Vogle gave the community, when he breathlessly wrangled approval, at the 11th hour.

Displaying the Bearcat will rekindle protest and animosity towards the SCPD. It will unnecessarily divide our community, AGAIN, when healing and bring the community together is what is most needed.

Please, call this off.


In a 2017 Indybay article, Steve Pleich wrote about Brokaw's involvement in the selection of Chief Mills:

"[ACLU] Chapter Board Member Lee Brokaw was chosen by the City Manager, to participate in one of four panels who interviewed the 6 potential candidates for the position on new Chief of SCPD. His panel met with the City Manager to advocate for an ACLU compatible chief. As chapter representative, Lee Brokaw spent 10 hours interviewing the 6 candidates. Chapter board member Brokaw advocated very strongly for the hiring of Andy Mills who was selected as new chief."

As you know I believe in transparency and giving people facts to make thoughtful decisions. I felt the way the Bearcat was obtained was antithetical to this belief. The purpose of the demonstration was to allow people to see for themselves the Bearcat, work through a problem and have them decide for themselves the value of this equipment.

I have decided to pull back on this effort. We will not hold the demonstration for now. There are two reasons: one, several people who I trust and respect, who would I believe be against this type of equipment, have asked me not to do this. “This would open old wounds unnecessarily.”

Second we have a lot on our plates from homeless encampments we are trying to protect and manage, to theft problems we are focused on and gaining traction. If you’d like to discuss further of course I am wide open.

Andy
Add Your Comments
Support Independent Media
We are 100% volunteer and depend on your participation to sustain our efforts!