Add an Event
Newswire
Calendar
Features
Home
Donate
From the Open-Publishing Calendar
From the Open-Publishing Newswire
Indybay Feature
Publish to Newswire
Add an Event
Related Categories: Santa Cruz Indymedia | Health, Housing & Public Services
ACLU Letter to Santa Cruz City Council Opposes Ross Camp Closure
by Santa Cruz News
Wednesday Apr 10th, 2019 12:47 PM
On April 8, the ACLU of Northern California and the National Law Center on Homelessness & Poverty sent a joint letter to the Santa Cruz City Council opposing the closure of the Ross homeless encampment. "[W]e are concerned about any plan to criminalize the living behaviors of residents of the Ross Camp, either directly or indirectly. Due to the lack of available shelter bed, Martin bars the City from carrying out such a plan," the letter states. 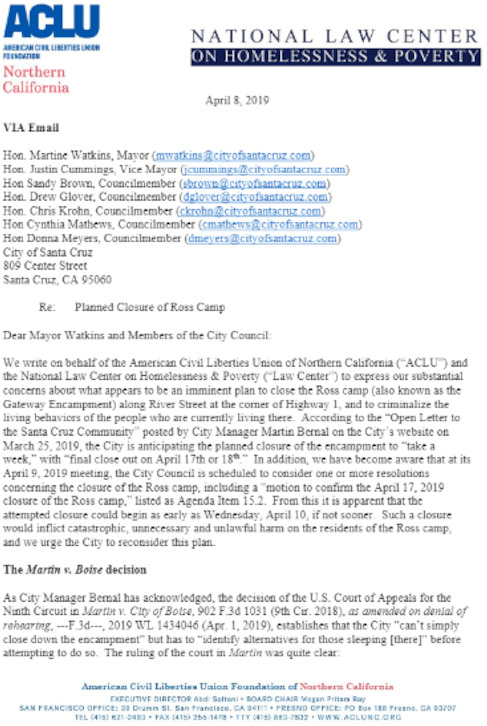 Download PDF (1.8MB)
On April 1, the Ninth Circuit Court of Appeals rejected a petition by the city of Boise in Martin v. Boise, leaving in place the September 2018 ruling that homeless persons cannot be punished for sleeping outside on public property in the absence of adequate alternatives. The ruling has changed the entire landscape of homelessness in the nine western states it impacts.

In addition to the letter from the ACLU, homeless activists delivered a notice at the April 9 city council meeting that residents of the Ross Camp would be filing a lawsuit. As a result, city council members voted to postpone the closure of the Ross Camp.
Add Your Comments
Support Independent Media
We are 100% volunteer and depend on your participation to sustain our efforts!