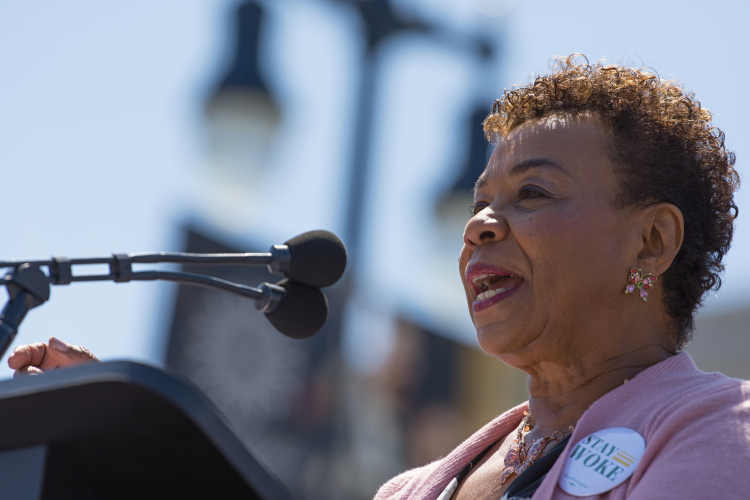 original image (6000x4000)
What Barbara Lee did on the House floor three days after 9/11 -- speaking prophetic words and casting the only vote against a green light for endless war -- remains the bravest wise action in Congress during this century. The contrast was jolting last week when her vote enabled the House Budget Committee to approve a bill with a $17 billion increase in military spending for next year and another such increase for 2021.

Because of the boost to the military, three progressive Democrats on the committee voted against the budget bill: Pramila Jayapal, Ro Khanna and Ilhan Omar. “This is a key philosophical moment for our party,” Khanna said. The second-term congressman told the committee: “We cannot be against endless wars and then fund those wars.”

But, in effect, Barbara Lee voted to fund those wars -- plus vast quantities of new weaponry and waste. If she had joined with Jayapal, Khanna and Omar in voting no, the committee would have deadlocked with an 18-18 tie, blocking the bill. (Many deficit-hawk Republicans voted against the bill because it raises the caps on non-military and military spending.)

After the committee vote on April 3, I requested a statement from Congresswoman Lee. “I voted to advance a bill out of committee that sets budget caps for the next two fiscal years,” she said. “To be clear: I do not support the Pentagon spending levels in the bill and voted for an amendment offered by my colleague Rep. Khanna to freeze Pentagon spending at FY2019 levels. Unfortunately, the Khanna amendment failed.”

Lee’s statement added: “I have a long record of fighting to cut bloated Pentagon spending, audit the Pentagon and repeal the 2001 Authorization [for] Use of Military Force. I will continue to fight for these efforts, and to increase domestic discretionary spending as the budget and appropriations process moves forward.”

Certainly, Barbara Lee has been a stalwart opponent of endless war. Her tireless efforts to undo the AUMF have most recently included the introduction in mid-February of a bill titled “Repeal of the Authorization for Use of Military Force” (H.R. 1274).

Yet there’s no getting around the fact that Lee’s vote in committee last week made it possible for a budget bill that further bloats the Pentagon’s spending to reach the House floor. The vote there is expected on Tuesday or Wednesday. (If you agree with most Americans that military spending should be cut instead of raised, you can quickly email your representative about it here.)

This is not the first time in recent years that Lee has succumbed to party-line militarism. Her notable anti-diplomacy tweet in July 2017 from the official “Rep. Barbara Lee” Twitter account -- denouncing President Trump for meeting with Russian President Vladimir Putin -- remains posted to this day. Yet her pivotal Budget Committee vote a few days ago is Congresswoman Lee’s most tangible and disappointing assist to the military-industrial complex.

Barbara Lee’s sincerity and commitment to peace are beyond question. But it’s all too easy for lawmakers to be unduly influenced by party leadership on Capitol Hill, where conformity is vital for the warfare state. Only pressure from the grassroots has the potential to overcome the business as usual in official Washington.

When progressives in Congress go wrong, we must be willing to say so -- clearly, publicly and emphatically. With her decisive vote to enable an increase in military spending, Barbara Lee was wrong.
___________________________________
Norman Solomon is cofounder and national coordinator of RootsAction.org. He is the author of a dozen books including War Made Easy: How Presidents and Pundits Keep Spinning Us to Death. Solomon is executive director of the Institute for Public Accuracy.

https://www.normansolomon.com/
Add Your Comments
LATEST COMMENTS ABOUT THIS ARTICLE
Listed below are the latest comments about this post.
These comments are submitted anonymously by website visitors.