Newswire
Calendar
Features
Home
Donate
From the Open-Publishing Calendar
From the Open-Publishing Newswire
Indybay Feature
Publish to Newswire
Add an Event
Related Categories: Palestine | San Francisco
Manny's Out of the Mission
by MOOTM
Tuesday Apr 2nd, 2019 10:09 PM
The Mission District does not need another wine bar. It does not need a business claiming to be "for social justice," when it is simply using social justice as a marketing ploy. And the Mission cannot survive any more gentrification. 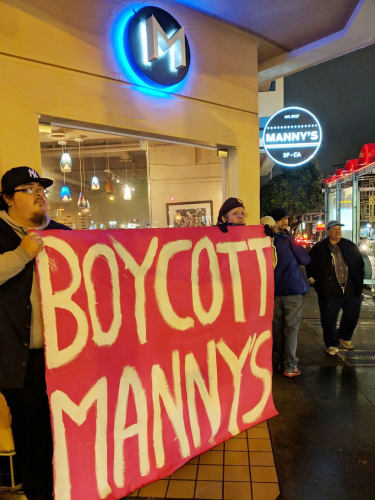 At the corner of Valencia and 16th Streets, black and brown working class people fight to stay while businesses that serve the richest of the rich thrive, like the new wine bar and so-called "social justice" event space, Manny's.

Many people have asked us why we chose to protest Manny's, when there are so many horrible things happening in the world right now. The reason is because Manny's represents and propels some of the worst problems affecting our low-income communities of color, such as racism, displacement, and policing, while using fake "progressive" political messages toward conservative ends.

Manny's owner, Emanuel "Manny" Yekutiel, is a self-proclaimed Zionist who has a long history of working with Zionist organizations like A Wider Bridge. As a rightwing racist ideology, Zionism claims Palestinian people have no right to their land. The so-called nation of Israel enforces this ideology by murdering, arresting, torturing, and displacing Palestinians - creating an apartheid state not unlike South Africa's.

An international controversy was created when the Bay Area civil rights icon Angela Davis recently had a civil rights award revoked over her criticism of zionism. Israel receives more military aid from the US than any other country - $4 billion per year and growing - and uses this money to create one of the world's deadliest armies and bulldoze the homes of native Palestinians, killing those who get in their way.

Manny's supporters claim that our opposition to Manny's is anti-Jewish or antisemitic. This is a lie. Many of us are Jewish and oppose the abuse and displacement of working-class people, whether in Palestine or San Francisco. We recognize that when one person is oppressed due to the unequal distribution of money and power, the rest of us suffer too.

Manny and his Zionist supporters call us antisemitic not because they believe we are, but to silence us, like they attempted to do to Angela Davis. As organizations like Jewish Voice for Peace affirm, anti-Zionism is not antisemitism, this is a dangerous conflation.

Gentrification is killing our communities of color in the Mission. We
protest Manny's because we demand not another black or brown person should be jailed or die from a police shooting because a #BBQBecky decided they didn't want a tent on the sidewalk during a time when the city has a shameful lack of shelter beds and very-low-income housing; no Palestinian should die because of a war majorly funded by the US; no one should be evicted from San Francisco because a techie thinks the Mission is a cool, "gritty" neighborhood where they'd like to build a new condo; and no business or group should ever engage in what has become known as "woke-washing"--or using "progressive"-seeming politics to promote a conservative political cause.

Unfortunately, people like Manny Yekutiel actually benefit from the unequal distribution of resources. Manny recently switched jobs: He was formerly a power broker in Washington, DC politics, where he worked for the likes of Mark Zuckerberg, as a public relations director. Because of his access to money and power, he was able to move to San Francisco and quickly open a business in the Mission, at the same time as other local businesses wither and die. How? Manny's is on the ground floor of a low-income building run by Mission Housing and he was given a below-market rent to run a for-profit business while the building's tenants had no say in what filled the space in their building.

What is happening in the Mission is not the same as the violence Palestinians experience every day, as Israeli military forces come to evict them from the land where they've lived for generations. However, we see parallels in the hypocrisy of centrist Democrat leaders like Mission District Supervisor Hilary Ronen who use their positions to applaud Manny's, while at the same time vital Latinx cultural spaces like the Galeria de la Raza are evicted. The black and brown residents of the burned-down complex at 22nd and Mission Streets have been waiting for nearly five years while the city overlooks the empty lot owned by slumlord Hawk Ling Lou. In those same five years, luxury units costing more than $1 million per condo crop up around the neighborhood, going from blueprint to building overnight.

Manny Yekutiel's private prep school background and DC connections helped him raise money to open his for-profit wine bar with a supposed "social justice" mission. However, "social justice" is meaningless when Manny's hosts events with pro-gentrification politicians like Scott Wiener, or a director of the $2,200-per-person Burning Man Festival. For Manny to claim his business as a place for "social justice" is an insult to the radical history of Mission and San Francisco grassroots community organizing.

We are encouraged that despite Manny's public relations experience, as well as the corporate press's emphatic support for him, a large and exciting group of anti-gentrification and pro-Palestinian community organizations have come together to boycott Manny's and cancelled planned events at the space.

As Angela Davis reminds us, "freedom is a constant struggle." We ask you all to continue the work of collective liberation by joining us every Wednesday st 7pm on the picket line to fight gentrification, Zionism, antisemitism, and all forms of oppression. 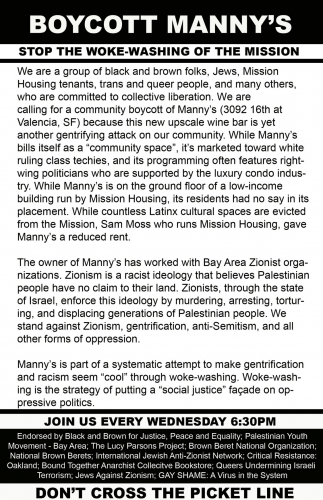 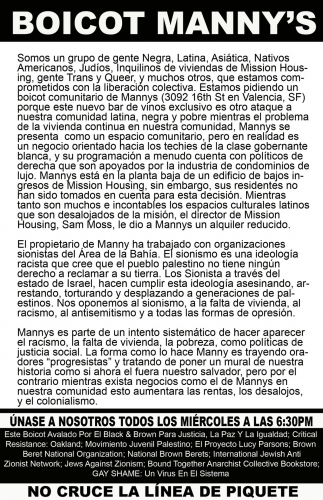 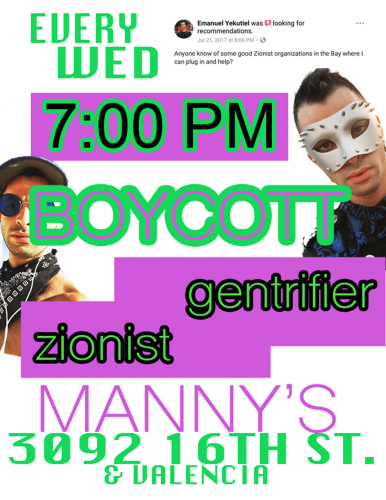 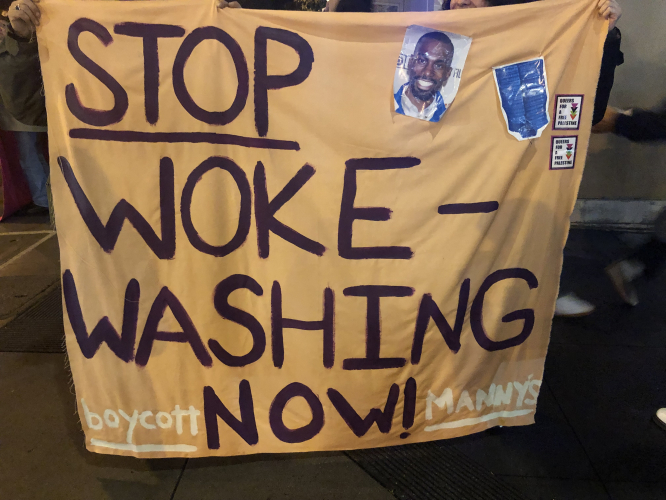 §Other Democrats Besides Ronen Support Zionist Manny's
by Register Peace & Freedom or Green
Sunday Apr 21st, 2019 8:57 PM
Update on the travesty that is Zionist Manny's:
Former Supervisor Tom Ammiano and current Supervisor Gordon Mar both crossed the picketline at Manny's, and of course, both are Democrats, as is Hilary Ronen, and the rest of the Board of Supervisors. See the SF Green Party's April 17, 2019 tweet at
https://twitter.com/SFGreenParty

The Democrat-Republicans are the twin parties of war and fascism, and that includes 100% support of the American military base called Zionist Israel, at all levels of office. Years ago, in the 1980s, Ammiano took a trip to Israel paid for by the Zionists, of course, and returned stating that he "feels Israel's pain," whatever that is. He did not bother to tell us if he feels the Palestinians' pain, which is obvious, and includes the theft of Palestinian land and torture and murder of the Palestinian people, for 71 years, paid for with our tax dollars to the tune of $4 billion a year above the table, and more when loans become grants. Tom Ammiano, like his successor as District 9 Supervisor, Hillary Ronen, has a reputation of being part of the "left wing" of the Democratic Party. There is of course no such thing as a left wing to a party that receives the same corporate contributions as the Republican Party and votes together with the Republicans to give $7 trillion to the war machine, which includes Israel, to maximize the profits of the oil companies and munitions makers, the only reason the military exists.

The litmus test of everyone who considers themselves to be a progressive voter must be the candidate's and party's position on Zionist Israel. Only Peace & Freedom Party and the Green Party are 100% in support of the Palestinian liberation struggle, and both never accept corporate contributions. If you are horrified that these well-known Democratic Party politicians support Zionist Israel and cross a picketline condemning Zionist Manny's wine bar and politics, change your party registration today to Peace & Freedom or Green. You can register online at https://registertovote.ca.gov/
For more information, see:
http://www.peaceandfreedom.org/home/
http://www.cagreens.org/
Add a Comment
Support Independent Media