original image (1140x370)
“The Trump administration is plotting behind closed doors to turn over some of California’s most precious wild places to dangerous drilling and fracking,” said Clare Lakewood, a senior attorney at the Center. “Californians have every right to know the details of this destructive plan, and it’s deeply worrying that the BLM is refusing to release them.”

Today’s lawsuit, filed in the U.S. District Court for the Northern District of California, demands records related to BLM’s resource-management plans for the Southern Diablo Range and Central Coast of California. It also seeks records related to the Central Coast Field Office’s draft resource-management plan amendment and environmental impact statement for oil and gas leasing. The Center first requested these records under the Freedom of Information Act in August 2018, but the BLM has failed to respond.

Oil development in Monterey, San Benito and Fresno counties would likely involve fracking and other extreme extraction techniques. Fracking is an extraction process that blasts toxic chemicals mixed with water underground to crack rocks. A 2015 report from the California Council on Science and Technology concluded that fracking in California happens at unusually shallow depths, dangerously close to underground drinking water supplies, with unusually high chemical concentrations.

The Trump administration’s California oil and gas leasing plans would end a six-year moratorium on leasing federal public land and mineral estate in the state to oil companies. The BLM has not held a single lease sale in California since 2012. In 2013 a federal judge ruled that the agency violated the law when it issued oil leases in Monterey County without considering the environmental risks of fracking.

“In stepping up his war on California, Trump’s eager to auction off our state’s iconic landscapes to his fossil fuel buddies,” Lakewood said. “But we won’t let the administration sweep the dangers of fracking and oil drilling under the rug to make it happen.” 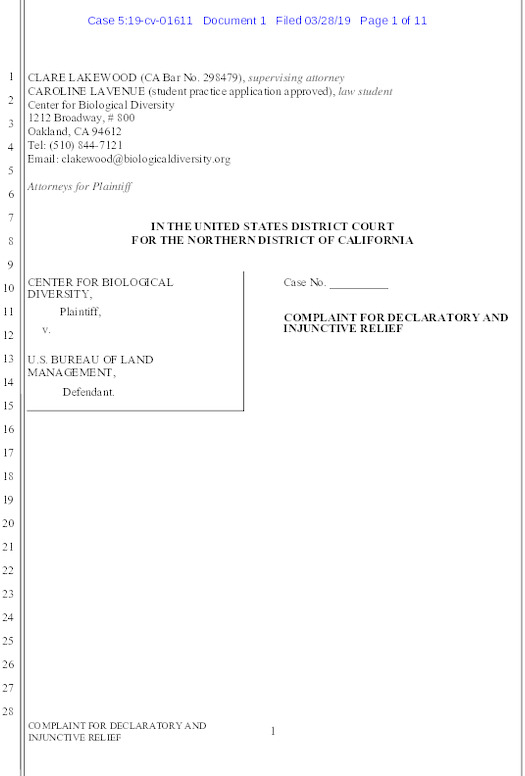 Download PDF (165.0KB)
https://www.biologicaldiversity.org/
Add Your Comments
LATEST COMMENTS ABOUT THIS ARTICLE
Listed below are the latest comments about this post.
These comments are submitted anonymously by website visitors.