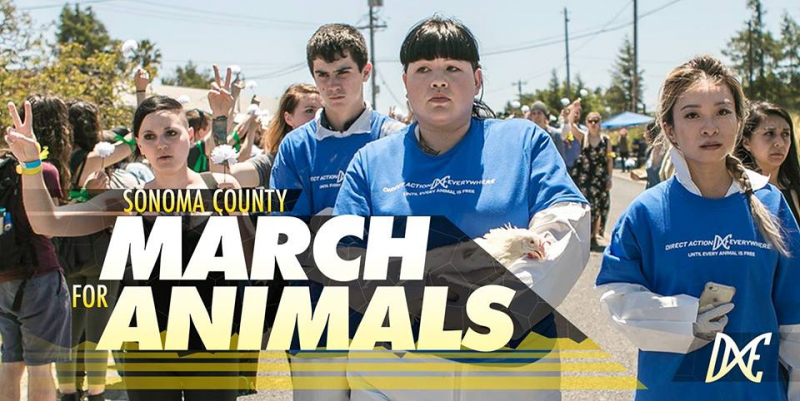 Join hundreds of animal lovers in Sonoma County for a peaceful, family-friendly march and rally. Together, we will demand justice, compassion, and freedom for all animals!

Recently, repeated evidence of criminal animal cruelty has been exposed at factory farms in Sonoma County. Now, the nonviolent whistleblowers who exposed this cruelty are facing felony charges and years in prison. It’s time that we come together to take action and show the world that animal abuse and activist repression are not supported by the public.

Let's march for a world where all animals are treated with respect, for their sake, for our sake, and for the planet's sake.

WEAR: Whatever you want! Because we are an above-ground organization, we do not allow people to cover their faces during protests except for religious/cultural reasons.

ACCESSIBILITY: This event will include standing for 30-60 minutes followed by an approximately 2.0 mile march. The route will be wheelchair accessible. If you have questions or need support to attend this event, email sfbay-protest [at] directactioneverywhere.com.

WHO: Everyone is welcome! Family friendly event.
---

Since 2014, whistleblowers and investigators with the animal rights network Direct Action Everywhere (DxE) have been documenting the conditions inside animal agriculture facilities in Sonoma County. In every instance, investigators have found criminal animal cruelty including violations of California Penal Code Section (CPC) 597 (which prohibits subjecting any animals to unnecessary suffering) and Proposition 2 (which prohibits intensive confinement of egg-laying hens).

The footage taken inside these farms show baby chicks who are so sick and injured they cannot stand to reach food and water, hens who are trapped in wire cages for their entire lives, and birds who are cannibalizing each other due to stress and confinement. Investigators also found many dead animals inside barns, some of whom were in such advanced stages of decomposition that necropsies could not even be performed. Veterinarian reports confirm these findings and indicate that there are animals on these farms that are too sick and injured to stand or walk, have necrotic wounds, and are starving.

This information has been brought to key stakeholders including the District Attorney Jill Ravitch, the Sheriff’s Office, Sonoma County Animal Services, the California Attorney General, and the California Department of Food and Agriculture. In all instances, the whistleblowers have been either ignored or met with inaction. There has been no accountability for the corporations and farms engaged in criminal animal cruelty; instead, more than 75 activists have been prosecuted for investigating the farms. The County has made a concerted effort to take down DxE leadership, charging 6 Organizers, including 4 of the 5 members of the elected Core team, with seven felonies each.

Despite repression, more and more activists are speaking up and taking action for animals. They are demanding that government officials commit to investigating animal abusing facilities and ending the prosecution of nonviolent whistleblowers.

Direct Action Everywhere (DxE) is a grassroots network of animal rights activists. Through open rescue, demonstration, and disruption, we are creating a world where every animal is safe, happy and free.

DxE cultivates a welcoming and supportive community. We ask that all those who attend our events (online and offline) respect our Code of Conduct which can be reviewed at dxe.io/conduct.

If you have any questions or concerns, please email sfbay [at] directactioneverywhere.com.
END_OF_DOCUMENT_TOKEN_TO_BE_REPLACED
Added to the calendar on Sun, Mar 24, 2019 1:43PM
Add Your Comments
Support Independent Media
We are 100% volunteer and depend on your participation to sustain our efforts!