Add an Event
Newswire
Calendar
Features
Home
Donate
From the Open-Publishing Calendar
From the Open-Publishing Newswire
Indybay Feature
Publish to Newswire
Add an Event
Related Categories: California | Santa Cruz Indymedia | Government & Elections | Health, Housing & Public Services | Racial Justice | Womyn
Report Finds Widespread Neglect and Abuse in Anaheim and Santa Ana Shelters
by ACLU of Southern California
Thursday Mar 14th, 2019 6:48 PM
SANTA ANA, MARCH 14, 2019 — Orange County, in the midst of a dire homelessness crises, opened emergency shelters, giving hope to those who were living in punishing conditions on the streets. But what once was a symbol of hope has become a nightmare for many residents. 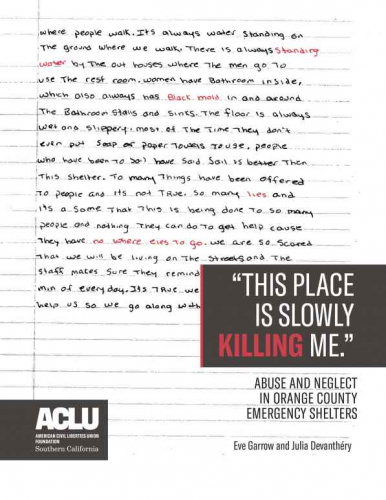 original image (597x772)
A year-long investigation by the American Civil Liberties Union Foundation of Southern California uncovered toxic and unsafe conditions inside three shelters, including too few toilets for the number of residents and broken toilets that went unrepaired for months; raw sewage flowing from porta potties; showers with no temperature control if they work at all; infestations of rodents, maggots, and other insects; an acute shortage of soap and cleaning products; a lack of heat on cold winter nights; and flooding during rainstorms.

Women residents were targets of sexual harassment by male staff members, including incessant, demeaning comments about their bodies and appearance, voyeurism while using bathroom facilities, and offers of special treatment in exchange for sex.

Today, the ACLU SoCal released a comprehensive report, "'This Place is Slowly Killing Me:' Abuse and Neglect in Orange County Emergency Shelters," compiled through first-person visits and more than 70 interviews with residents, staff members, and shelter volunteers at three facilities — the Courtyard Transitional Center and SAFEPlace in Santa Ana, and Bridges at Kraemer Place in Anaheim.

The shelters' conditions and treatment of residents, who were threatened with reprisals if they tried to report infractions, are not just inhumane, they are against the law.

The report comes at a time when Orange County and its cities are in the midst of an unprecedented expansion of the emergency shelter system. "Orange County's emergency shelters are dangerously unregulated and downright abusive," said Eve Garrow, policy analyst and advocate for the ACLU SoCal. “The need for reform becomes increasingly urgent as more shelters are added to the system."

In addition to harassment and inhumane conditions in the shelters, the report also found:

* Discrimination and abuse: Residents, staff, and volunteers reported discrimination based on disability, age, race, and gender. There was, as well, sexual, physical, and verbal abuse of residents. And in some cases, staff neglected the needs of elderly residents to the point that their conditions became medical emergencies.
* Suppression of freedom of expression and movement: Residents, in many cases, are stripped of their fundamental right to express themselves without threat of reprisal and not allowed to leave shelters on foot.
* Deprivation of fundamental rights without due process: There is evidence that some shelter staff steal, confiscate, or destroy residents’ property, and impose sanctions (including eviction) arbitrarily and without due process.
* Impunity and lack of accountability: Residents lack an effective way to hold staff accountable for violating their rights and experience punishing retaliation when they try to speak up either within the shelter or publicly.

Incidents of residents being ejected from shelters or threatened with ejection just for making complaints about living conditions and staff treatment violate the due process guarantees of the Constitution and the Tom Bane Civil Rights Act. "People do not give up their constitutional rights just because they are homeless," said Julia Devanthéry, staff attorney at the ACLU SoCal. "The county and its shelter operators must respect the right of shelter residents to voice complaints about the shelters without intimidating or relating against people who speak out."

The report includes ten recommendations for Orange County to bring the shelters and their operators into compliance with the law, and to provide humane services to people who are experiencing homeless. The recommendations include establishing clear and binding uniform health and safety standards; forming a county office of civil rights to protect the civil rights of people experiencing homelessness; standardizing a reasonable accommodation policy for residents with disabilities; and creating safe and confidential whistleblower policies for emergency shelter employees.

The recommendations are not just the right thing to do, they can help protect the county from liability for the wide-spread abuse and civil rights violations documented in this report. 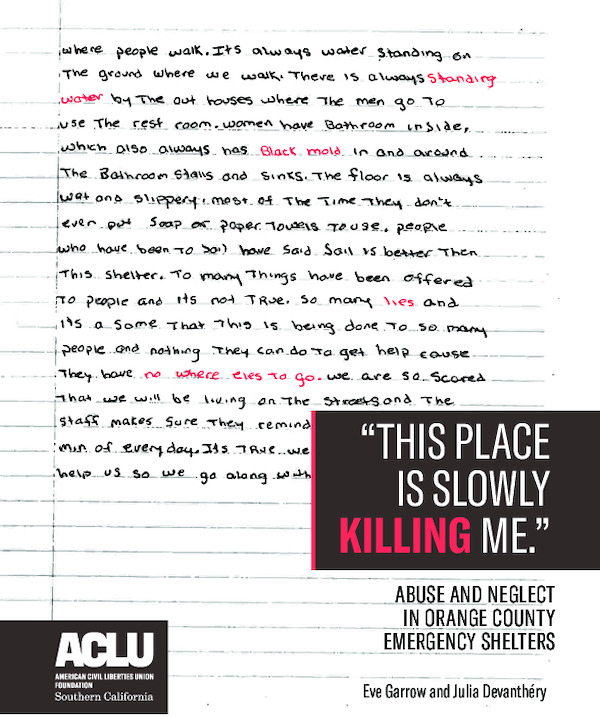 Download PDF (16.2MB)
https://www.aclusocal.org/
Add Your Comments
Support Independent Media
We are 100% volunteer and depend on your participation to sustain our efforts!