Chelsea Manning is now in jail because of her exposure of the war crimes of the US government and corporations around the world. The real criminals are still unprosecuted while Chelsea has been jailed again.
http://www.upwa.info
§Free Julian Assange
by Bay Area Free Julian Assange Action Committee Thursday Mar 14th, 2019 6:10 AM 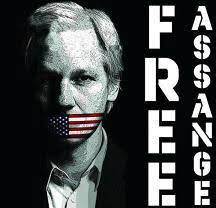 Julian Assange is still be hounded by the US government and the UK government. These government officials are engaged in war crimes around the world and they are terrified of Assange and WikiLeaks who have exposed their crimes. The combined attack on Assange and now Chelsea Manning must be opposed by all working people and all people of the world.
http://www.upwa.info
Add Your Comments
Support Independent Media
We are 100% volunteer and depend on your participation to sustain our efforts!