New Report: The Costs and Benefits of a Supervised Use Site in Denver, Colorado 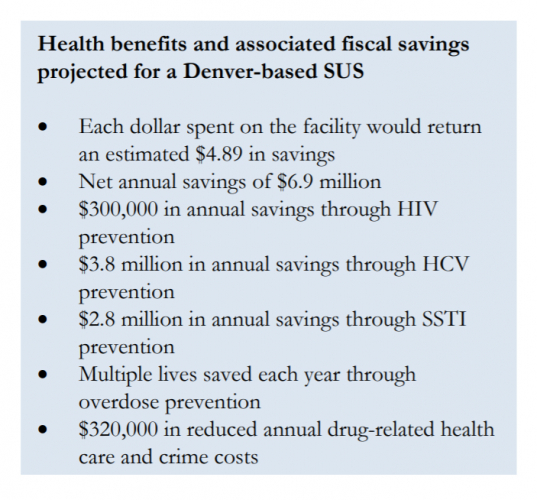 original image (703x654)
February 19, 2019 - Today the Drug Policy Alliance is releasing a new report, The Costs and Benefits of a Supervised Use Site in Denver, Colorado. Produced in collaboration with Colorado Fiscal Institute, Law Enforcement Action Partnership and Harm Reduction Action Center, the report marshals the best available data from Denver and from existing facilities in Canada and Europe to analyze the cost effectiveness of a prospective supervised use site in Denver.

Facilities providing supervised consumption services (SCS) are legally sanctioned to allow people to consume pre-obtained drugs under the supervision of trained staff while providing access to sterile equipment, health care, counseling, and referrals to medical and social services, including drug treatment. Such facilities are also referred to as supervised use sites (SUS), the terminology adopted most commonly in Denver, as well as overdose prevention centers, safe or supervised injection facilities (SIFs) and drug consumptions rooms (DCRs).

Advocates are lauding this report as confirmation that the Colorado General Assembly should move forward without delay with legislation to allow a supervised use site. In November of 2018, Denver City Council nearly unanimously passed an ordinance authorizing establishment of a supervised use site pilot program contingent upon approval of corresponding state legislation that is pending introduction. The new report shows that the legislature has an urgent opportunity to save money and lives by introducing and approving this bill.

Several state legislators, including Senator Brittany Pettersen (D - District 22), Senator Kevin Priola (R - District 25), and Representative Leslie Herod (D - District 8) have been involved in plans to introduce a bill that would allow Denver to implement the supervised use site pilot program ordinance, but Senator Pettersen announced today that those efforts are stalling. Local experts from the public health, medical, faith and legal communities, as well as families impacted by overdose, insist on the urgent need to move forward.

“The legislature has a duty to pursue fiscally responsible and evidence-based public health policy. We need to face the fact that opposition to Denver’s supervised use site pilot program is based solely in bias, stigma and misinformation,” says Amanda Bent, Policy Manager for the Colorado office of the Drug Policy Alliance. “Extensive studies prove that supervised use sites save money and resources while preventing disease and death. This cost-benefit analysis report shows how an initiative that will funded by private foundations, grants and individual donors will benefit the entire Denver community. It’s irresponsible and unconscionable for the legislature to stop Denver from implementing this ordinance.”

“We need to act swiftly to bring new, scientifically proven tactics to address the opioid epidemic, which is why physicians and physician organizations overwhelmingly support pilot supervised injection facilities or supervised use sites,” says Dr. Donald Stader, MD, FACEP and President of the Colorado American College of Emergency Physicians. “Backed by significant and compelling scientific data, these are a key component of our response to the opioid epidemic. A supervised use site in Colorado will save lives, prevent disease, facilitate patients getting into treatment and save our medical system millions of dollars. This represents not only a logical, scientific solution to problems around injection drug use, but also a moral response to a public health crisis.”

Colorado Governor Jared Polis has suggested that supervised use sites may represent innovative, cost-effective access to treatment under the appropriate purview of local control. The Colorado Office of the Attorney General, previously under Republican Cynthia Coffman, endorsed the supervised use site coalition and current Democratic Attorney General Phil Weiser, who assumed office this year, is also supportive. The findings of this report only bolster the existing backing from diverse stakeholders and buy-in from bipartisan officials. 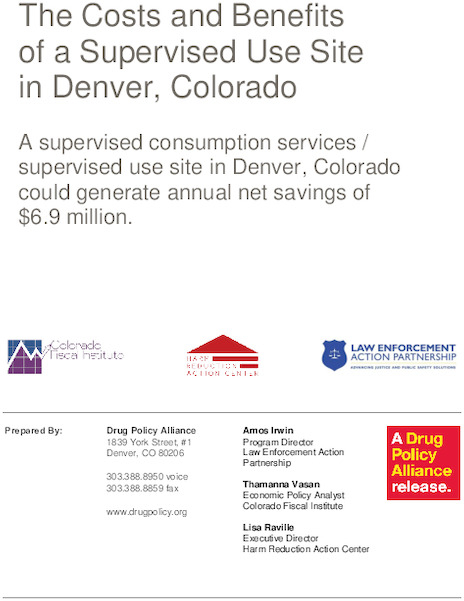 Download PDF (472.3KB)
"The Costs and Benefits of a Supervised Use Site in Denver, Colorado"
Add Your Comments
Support Independent Media
We are 100% volunteer and depend on your participation to sustain our efforts!