by Dan Bacher
“Our community knows refinery expansions are a dead end,” said Isabella Zizi, Stand.earth. “We need our public officials like the Contra Costa County supervisors to stand with us in preventing new pollution sources from harming our health, and supporting real solutions like a just transition for refinery workers and local economic development that protects air and water quality." 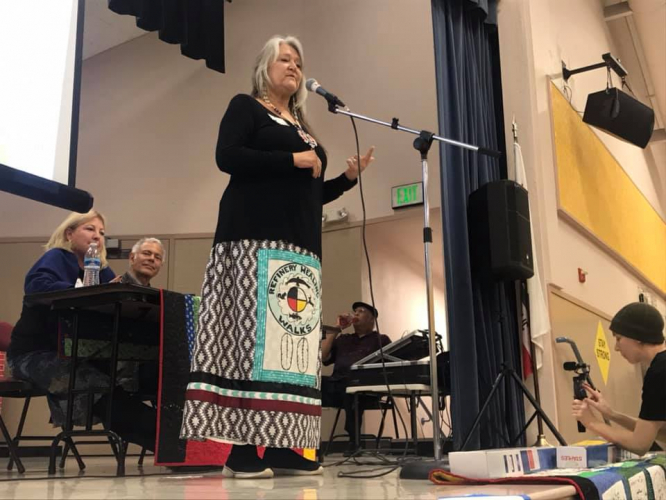 original image (960x720)
RODEO, CA — A coalition of local and community groups hosted a town hall on Thursday evening, March 7, in Rodeo, drawing over 150 people to discuss the risks of a proposal by Phillips 66’s San Francisco Refinery in Rodeo to bring in more oil tankers and process more heavy crude oil like tar sands.

The tar sands expansion proposal would impact local health and the climate by increasing refinery emissions and worsening air quality for nearby communities while also increasing tanker traffic and the risk of a devastating oil spill in the San Francisco Bay Area, according to the groups. A video of the event is at facebook.com/standearth.

“Many of our First Nations relatives in Canada are doing all they can to resist the Trans Mountain Pipeline, which would allow the transport of tar sands through our Bay via over 120 tankers,” said Pennie Opal Plant, Idle No More SF Bay. “This type of oil cannot be completely cleaned from water. What are we willing to lose?"

“The refinery’s latest plan to expand dilbit imports, cracking of that bitumen, and recovery of those diluent oils threatens to lock in a worst-case future for our climate, air, health, safety, and Bay,” stated Greg Karras, Communities for a Better EnvironmentPeople have a right to know about this unnecessary threat.”

“As a physician who is also trained in public health, I’m deeply opposed to this proposed refinery expansion. It will expose the community to toxins that cause or worsen lung and heart disease, lead to stroke and other nervous system abnormalities, and cause reproductive problems, as well as cancer and leukemia,” said Jan Kirsch, M.D., M.P.H. “Together, let us be guided by the motto of medicine: ‘First, do no harm.’”

“Our community knows refinery expansions are a dead end,” said Isabella Zizi, Stand.earth. “We need our public officials like the Contra Costa County supervisors to stand with us in preventing new pollution sources from harming our health, and supporting real solutions like a just transition for refinery workers and local economic development that protects air and water quality."

“We had such a beautiful turn out for the Town Hall: No Tar Sands Refining in Rodeo,” said Zizi after the event. “This was the first town hall I’ve ever organized and had a crowd of over 150 community members flowing from Marin, Berkeley, Kensington, El Cerrito, Richmond, Hercules, Rodeo, Crockett, Vallejo, Benicia, Pittsburg and many more!”

“Thank you to the elected officials, health experts, scientists and community organizers for passing on so much knowledge about climate change, health concerns, environmental impacts and most importantly connecting the dots that we all need to rise together,” Zizi concluded.

“The refinery is currently seeking permits to expand its wharf capacity and increase the number of oil tankers traveling to its refinery through San Francisco Bay. No environmental impact report (EIR) has been released for this project. The Bay Area Air Quality Management District asked Contra Costa County to lead that environmental review, but the County has not yet agreed to do so,” according to the groups.

“If the refinery’s full expansion and increased wharf capacity is permitted, more than twice as many crude oil tankers could travel to the refinery, many of them carrying tar sands from Canada. The refinery expansion alone could mean a tenfold increase in the amount of tar sands passing through San Francisco Bay. A September 2018 panel in Oakland detailed the connection between Canada’s Trans Mountain Pipeline and the Phillips 66 San Francisco Refinery expansion,” the groups said.

“Tarsands is one of the dirtiest crude oils on the planet and is extremely difficult to clean up in the event of an oil spill. Tar sands is high in sulfur and heavy metals. Extracting and refining it creates an outsize climate impact, and refining it increases disparately severe health impacts in nearby communities. Tar sands is so thick when it comes out of the ground that it is thinned for transport, creating diluted bitumen or dilbit. The toxic and flammable diluent makes it unsafe to approach a tar sands oil spill until the chemicals have evaporated,” the groups concluded.

The reason for why the tar sands expansion proposal at Phillips 66’s San Francisco Refinery is being even being considered is because of #Big Oil’s capture of the regulators from top to bottom in California. The oil and gas industry is most powerful corporate lobby in Sacramento, spending many millions of dollars every years to block, weaken and stop legislation and regulations protecting public our streams, rivers, lakes, bays and ocean waters, public health and vulnerable communities throughout the state.

The Western States Petroleum Association (WSPA) — the organization that has topped lobbying spending in California most years — spent $7,874, 807 to influence California government officials in 2018. WSPA was outspent only by the $9,580,357 spent by embattled Pacific Gas and Electric Company in 2018.

The powerful association spent all of its money in the 2017-2018 session on general lobbying, with nothing spent on the CPUC. Of the four quarters, WSPA spent its most money lobbying, $2,649,018, in the eighth quarter, from October 1 to December 31, 2018.

The Western States Petroleum Association is led by President Catherine Reheis-Boyd, who served as the chair of the controversial Marine Life Protection Act (MLPA) initiative Blue Ribbon Task Force to create so-called “marine protected areas” in Southern California from 2009 to 2012, as well as serving on the task forces for the Central Coast, North Central Coast and North Coast from 2004 to 2012.

Because of this money and the power that Big Oil wields in California, the Jerry Brown administration, in stark contrast with its “green” facade, issued over 21,000 new oil and gas drilling permits in California. That include more than 200 permits for offshore wells in state waters -- wells within 3 miles of the California coast.

For more information about WSPA and Big Oil, go to: http://www.dailykos.com/...

Photo: Pennie Opal Plant, Idle No More SF Bay, speaks at the town hall meeting in Rodeo to discuss the risks of the proposal to bring in more oil tankers and process more heavy crude oil like tar sands. Photo courtesy of Isabella Zizi, Stand.earth.
Add Your Comments
Latest Comments
Listed below are the latest comments about this post.
These comments are submitted anonymously by website visitors.
TITLE
AUTHOR
DATE
Tim Grayson Town Hall
Maureen Brennan
Remember the Kalamazoo
Earl Richards
Followup on Assemblyman Tim Grayson Townhall meeting in Concord, CA on 3-12-2019
Eduardo C. Ayalin
No Toxic, Tar Sands
Earl Richards
Support Independent Media
We are 100% volunteer and depend on your participation to sustain our efforts!