On 8th Anniversary Of Fukushima — Stop The Nukes 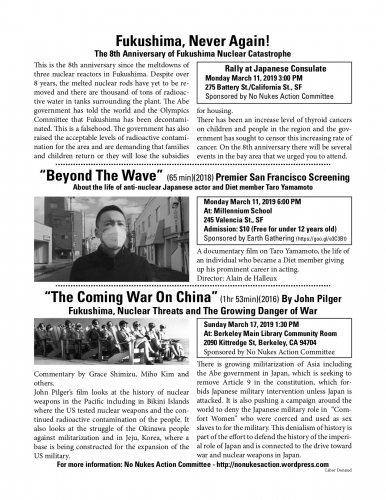 On March 11, 2019 Remember Fukushima On The 8th Anniversary of the Nuclear Catastrophe Which Continues Today

On 8th anniversary of Fukushima nuclear meltdowns speakout against the restarting of Japan’s nuclear plants, for defense of the children and families of Fukushima and against the repression, attacks on journalists and anti-nuclear activists and move toward militarization

This is the 8th anniversary since the meltdowns of three nuclear reactors in Fukushima. Despite over 8 years the melted nuclear rods have yet to be removed and there are thousand of tons of radioactive water in tanks surrounding the plant. The Abe government has said told the world and the Olympics Committee that Fukushima has been decontaminated. This is a falsehood. The government has also raised the acceptable levels of radioactive contamination for the area and are demanding that families and children return or they will lose the subsidies for housing.
There has been an increase level of thyroid cancers on children and people in the region and the government has sought to censor this increasing rate of cancer.

On the 8th anniversary there will be several events in the bay area that we urged you to attend.

John Pilger’s film looks at the history of nuclear weapons in the Pacific including in Bikini Islands where the US tested nuclear weapons and the continued radioactive contamination of the people. It also looks at the struggle of the Okinawa people against militarization and
Jeju, Korea where a a base is being constructed for the expansion of the US military.
With the growing militarization of Asia including the Abe government in Japan. I it is seeking to remove Article 9 in the constitution which forbids foreign military intervention unless Japan is attacked the government is seeking the full militarization of Japan. It is also pushing
a campaign around the world to deny that the Japanese military role in “Comfort Women” who were coerced and used as sex slaves to for the military. This denialism of history is part of the effort to defend the history of the imperial role of Japan and is connected to the drive
toward war.’
Sponsored by No Nukes Action Committee


In 2020, Japan is inviting athletes from around the world to take part in the Tokyo Olympic Games. We are hoping for the games to be fair and peaceful. At the same time, we are worried about plans to host baseball and softball competitions in Fukushima City, just 50 km away from the ruins of the Fukushima Dai-ichi nuclear power plant. It was here, in 2011, that multiple nuclear meltdowns took place, spreading radioactivity across Japan and the Pacific Ocean - a catastrophe comparable only to the nuclear meltdown of Chernobyl.

The ecological and social consequences of this catastrophe can be seen everywhere in the country: whole families uprooted from their ancestral homes, deserted evacuation zones, hundreds of thousands of bags of irradiated soil dumped all over the country, contaminated forests, rivers and lakes. Normality has not returned to Japan.

The reactors continue to be a radiation hazard as further catastrophes could occur at any time. Every day adds more radioactive contamination to the ocean, air and soil. Enormous amounts of radioactive waste are stored on the premises of the power plant in the open air. Should there be another earthquake, these would pose a grave danger to the population and the environment. The nuclear catastrophe continues today.

On the occasion of the Olympic Games 2020, we are planning an international campaign. Our concern is that athletes and visitors to the games could be harmed by the radioactive contamination in the region, especially those people more vulnerable to radiation, children and pregnant women.

According to official Japanese government estimates, the Olympic Games will cost more than the equivalent of 12 billion Euros. At the same time, the Japanese government is threatening to cut support to all evacuees who are unwilling to return to the region.

International regulations limit the permitted dose for the general public of additional radiation following a nuclear accident to 1 mSv per year. In areas where evacuation orders were recently lifted, the returning population will be exposed to levels up to 20 mSv per year. Even places that have undergone extensive decontamination efforts could be recontaminated at any time by unfavourable weather conditions, as mountains and forests serve as a continuous depot for radioactive particles.

Our campaign will focus on educating the public about the dangers of the nuclear industry. We will explain what health threats the Japanese population was and is exposed to today. Even during normal operations, nuclear power plants pose a threat to public health – especially to infants and unborn children.

There is still no safe permanent depository site for the toxic inheritance of the nuclear industry anywhere on earth, that is a fact.

We plan to use the media attention generated by the Olympic Games to support Japanese initiatives calling for a nuclear phase-out and to promote a worldwide energy revolution: away from fossil and nuclear fuels and towards renewable energy generation.

We need to raise awareness of the involvement of political representatives around the world in the military- industrial complex.

We denounce the attempt of the Japanese government to pretend that normality has returned to the contaminated regions of Japan.

We call on all organisations to join our network and help us put together a steering group to coordinate this campaign. The Olympic Games are still two years away – now is still time to get organised.

We look forward to hearing from you, with best regards, 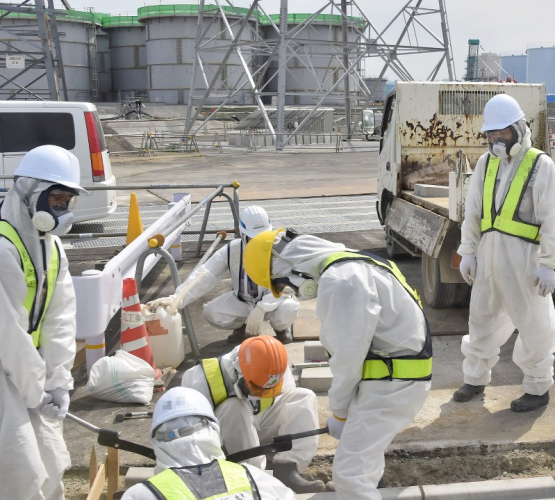 original image (799x719)
Eight years after the nuclear meltdown at Fukushima the nuclear rods that melted still have not been removed from the reactors and residents are being coerced to return to the contaminated area. The Abe government has is trying to have Olympic events close to the plant to propagandize the world that everything is OK and the area has been decontaminated.
END_OF_DOCUMENT_TOKEN_TO_BE_REPLACED
Add Your Comments
Latest Comments
Listed below are the latest comments about this post.
These comments are submitted anonymously by website visitors.
TITLE
AUTHOR
DATE
A Fukushima Child Evacuee’s Letter to the International Community
repost
Support Independent Media
We are 100% volunteer and depend on your participation to sustain our efforts!