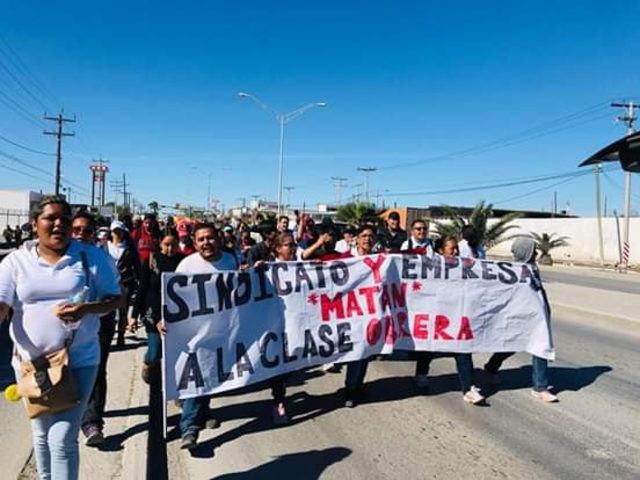 (for the Workers Party / PT, which partnered with MORENA to run AMLO for president)


Report on the Meeting with Congressman Gerardo Fernández Noroña — November 28, 2018 (Congress of the Union, Mexico City) —

On November 28, 2018, Congressman José Gerardo Fernán- dez Noroña received a delegation from the National Independent and Democratic Union of Farm Workers (SINDJA) and the Al- liance of National, State and Municipal Organizations for Social Justice of the Valley of San Quintín, Baja California. They were accompanied by leaders of the Sacramento (California) chapter of the Labor Council for Latin American Advancement (LCLAA), affiliated to the AFL-CIO.


The Sacramento LCLAA delegates have been spearheading the effort across the United States in support of the farm workers in San Quintin through the Driscoll's Corp. boycott campaign.

During their meeting, which was held in the offices of the Mexi- can Congress, the trade unionists from California asked Congressman Fernández Noroña his position

on the new free trade agreement, known in Mexico as the T-MEC and in the United States as the USMCA. Congressman Fernández Noroña explained that in his speech before the Congress on October 2, 2018 [see excerpts below], he had been very clear, stating: “The treaty, which according to Donald Trump is ‘very good,’ is deeply harmful to our national interests.”

Having said that — despite the struggle waged by Congressman Fernández Noroña and many others in opposition to the ratification of the new trade agreement (so that “Mexicans do not have to pay its con- sequences dearly”) — everything seems to indicate that this T-MEC treaty will be signed. In this new sit- uation, Congressman Fernández Noroña said, what needs to be done, given that the T-MEC treaty placed much emphasis on wages and labor rights, is to push for the implementation of the language on labor rights and working conditions contained in the new treaty. “Ensuring that there are mechanisms to implement labor laws will be essential,” he said. And if those rights are not respected, if they are not im- plemented, he continued, then U.S. transnational corporations, as well as their Mexican partners, will have to be prohibited from exporting their products to the United States.

The delegates of SINDJA and of the Alianza, for their part, delivered to Congressman Fernández Noroña a document signed by the top leaders of both their organizations. In that document, SINDJA and the Alianza affirmed their stance in relation to the new Free Trade Agreement: They called for an end to the “protection” contracts with charro (company) unions such as the CROM and the CROC, and they proposed that the next National Referendum should take up the issue of the T-MEC treaty.

"We will denounce any and all violations of workers’ rights,” Congressman Fernández Noroña told the delegation, “and we will help promote the mobilizations to demand that labor rights are upheld, so that genuine collective-bargaining agreements are signed in San Quintin and throughout the country."

Congressman Fernández Noroña promised to publicize at the national level the struggle and demands of the farm workers of San Quintin, "so that we can begin to resolve and end the brutal social injustice that exists in the country," he told the delegation. "We must deepen the revolution that has been un- leashed, and we must rescue our homeland.”

The meeting concluded with the commitment by Congressman Fernández Noroña to travel to Ense- nada and San Quintín, Baja California, to support the movement. "San Quintin is a national reference point," said Congressman Fernández Noroña. "The tenacious struggle of the farm workers has forced the government to legally recognize the new independent union and grant its official registration, but from the point of view of the demands, nothing has been resolved," he added.

In addition to traveling to San Quintin in the near future, Congressman Fernández Noroña accepted an invitation from the Sacramento delegates to travel to cities in California at the beginning of March 2019 in coordination with other unions, universities and Mexicans Living Abroad.
Added to the calendar on Sat, Feb 23, 2019 6:40PM
Add Your Comments
Support Independent Media
We are 100% volunteer and depend on your participation to sustain our efforts!