Dissent, Resistance, Insurrection and Mutiny: A Survey of Military Organization and Revolt 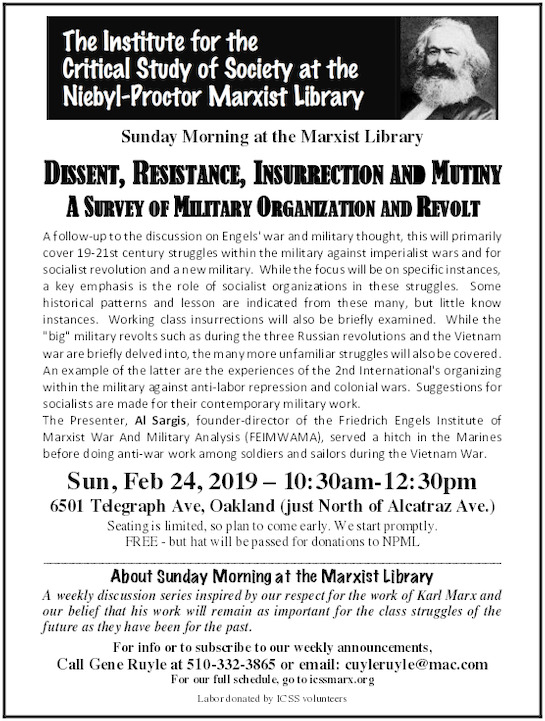 Dissent, Resistance, Insurrection and Mutiny A Survey of Military Organization and Revolt

A follow-up to the discussion on Engels' war and military thought, this will primarily cover 19-21st century struggles within the military against imperialist wars and for socialist revolution and a new military. While the focus will be on specific instances, a key emphasis is the role of socialist organizations in these struggles. Some historical patterns and lesson are indicated from these many, but little know instances. Working class insurrections will also be briefly examined. While the "big" military revolts such as during the three Russian revolutions and the Vietnam war are briefly delved into, the many more unfamiliar struggles will also be covered. An example of the latter are the experiences of the 2nd International's organizing within the military against anti-labor repression and colonial wars. Suggestions for socialists are made for their contemporary military work.
The Presenter, Al Sargis, founder-director of the Friedrich Engels Institute of Marxist War And Military Analysis (FEIMWAMA), served a hitch in the Marines before doing anti-war work among soldiers and sailors during the Vietnam War.

For info or to subscribe to our weekly announcements,
Call Gene Ruyle at 510-332-3865 or email: cuyleruyle [at] mac.com
For our full schedule, go to icssmarx.org
Labor donated by ICSS volunteers
END_OF_DOCUMENT_TOKEN_TO_BE_REPLACED
Added to the calendar on Thu, Feb 21, 2019 4:19PM
Add Your Comments
Support Independent Media
We are 100% volunteer and depend on your participation to sustain our efforts!