Add an Event
Newswire
Calendar
Features
Home
Donate
From the Open-Publishing Calendar
From the Open-Publishing Newswire
Indybay Feature
Publish to Newswire
Add an Event
Related Categories: North Bay / Marin | Police State & Prisons | Racial Justice
Crowd remembers rapper killed by Vallejo police
by Scott Morris
Monday Feb 18th, 2019 2:10 PM
Family members, friends and others touched by the death of Willie McCoy, who was fatally shot by Vallejo police on Feb. 9, gathered outside the Taco Bell where he was killed to remember him and protest the police on Sunday. 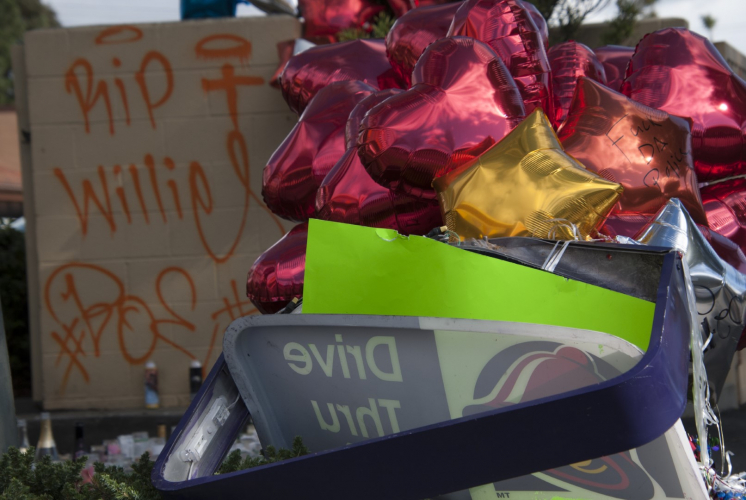 Family members, friends and others touched by the death of Willie McCoy, who was fatally shot by Vallejo police on Feb. 9, gathered outside the Taco Bell where he was killed to remember him and protest the police on Sunday.

“He’s my uncle and he ain’t coming back,” McCoy’s niece, 16-year-old Jhjh Pina, said at the protest, while wearing a picture of McCoy around her neck. “It’s hard that the police did this… and I want justice.”

McCoy, 20, was a rapper who performed under the name Willie Bo. He was allegedly found unconscious in his 2006 Mercedes in the drive-through lane at the Taco Bell at 974 Admiral Callaghan Lane. Taco Bell employees called 911 at 10:36 p.m. and reported that McCoy was slumped over in the driver’s seat, according to police.

When police arrived, two officers noticed that McCoy had a handgun on his lap, police said. Another officer arrived, and they attempted to open the driver’s side door and quickly grab the gun from his lap, but the door was locked.

Police parked a patrol car in front of McCoy’s car, so he couldn’t drive forward, and were pulling another car behind it when, according to police, McCoy started moving and looked toward the officers. Police said that the officers yelled commands at McCoy to show his hands, but instead he moved his hands toward the gun in his lap. Six officers opened fire.

Police yelled “shots fired” in radio archives at about 10:52 p.m., about 16 minutes after the initial call. In bystander video posted to YouTube, officers can be heard yelling “show me your hands” only after a volley of gunshots. No officers were injured.

After the shooting, police said the gun on McCoy’s lap was loaded and had been reported stolen in Oregon.

Melissa Nold, an attorney with the law offices of civil rights attorney John Burris, wrote in a Facebook post that she and attorney Adante Pointer examined McCoy’s body at the mortuary and estimated he had been shot 25 times. She also said that his passenger side window was already broken and was covered by a piece of plastic, so the officers could have opened that door.

More than a week later, the Taco Bell remains closed. “To ensure the safety of our employees and the well being of our community, we are closing our doors for now,” a sign on the door stated.

There were protests at the Taco Bell on Saturday and Sunday. A crowd marched to the Target nearby on Saturday. Sunday’s crowd was smaller, a few dozen people, who stayed in the parking lot at Taco Bell.

“We miss him so much,” said Chantal Burns, who said she was a good friend of McCoy’s and thought of him like family. “It just feels like a dream. We’re not supposed to be here right now. We’re supposed to be laughing with him right now.”

“They didn’t even try to wake him up,” Burns said on Sunday. “Nobody needs to be murdered. All these bad things they’re saying about a person, we all make mistakes but that doesn’t mean he deserves to die.”

The shooting was similar to when Demouria Hogg was killed by Oakland police officers in 2015. Hogg had been found unconscious in his car at the foot of an off-ramp from I-580 with a gun on the passenger seat. Police tried to wake Hogg for over an hour by blaring announcements from a loudspeaker.

When they broke his driver’s side window in an attempt to pull him out, Officer Nicole Rhodes fired two shots, saying that Hogg had reached for the gun. Video from Rhodes’ body camera does not show Hogg at the moment he’s shot. The city of Oakland eventually reached a $1.2 million settlement with Hogg’s family.

Vallejo police for years have had the highest rate of police shootings in the San Francisco Bay Area. There are between two and seven shootings each year by the department of roughly 100 officers.

The shooting of McCoy was already the second in Vallejo this year after a man was shot and wounded after he was allegedly found trespassing at an office park and then chased and cornered, when he confronted officers with a knife, police said. There have only been three other police shootings this year in the entire Bay Area.

Vallejo also pays a disproportionate amount of settlements and awards in civil rights lawsuits compared to other agencies in the region.

The officers who shot McCoy’s names have not been released. The shooting was captured on the officers’ body worn cameras, according to the department, but that footage has not been released. A new law passed in California last year that requires police departments to release body worn camera footage of a shooting within 45 days, but the law does not go into effect until July 1.

Among the people at Sunday’s rally was Shontell Vinson, who carried a sign that said, “release the body camera footage.”

Vinson, from nearby Richmond, said she didn’t know McCoy but came because her 7-year-old daughter was asking her questions about why McCoy died.

“He was asleep, there’s no reason,” Vinson told her daughter outside the Taco Bell. “The police was wrong.”

“They should be punished,” her daughter responded. 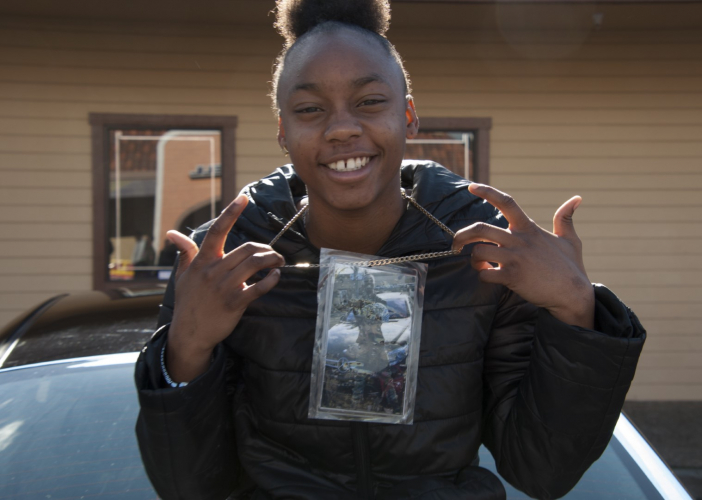 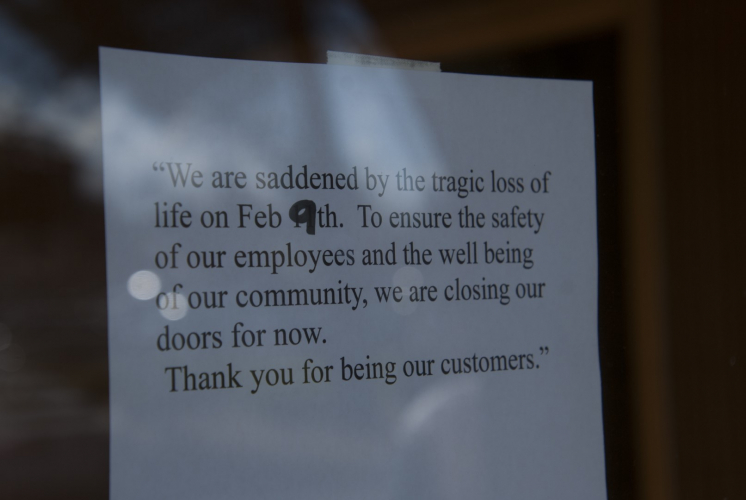 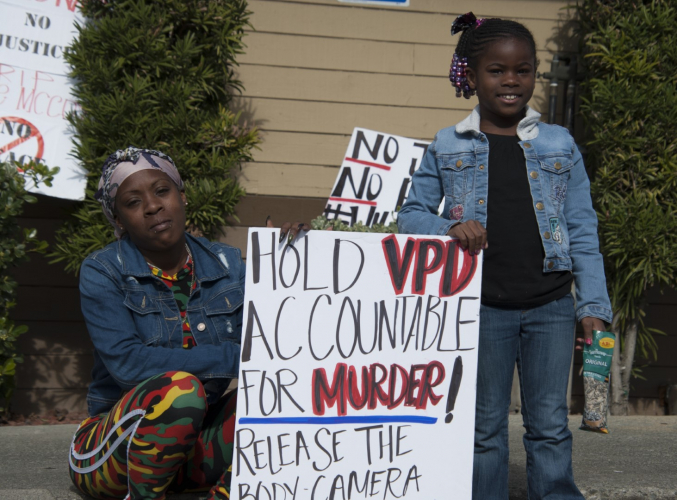 original image (1463x1080)
Shontell Vinson and her daughter Erica protest outside a Taco Bell in Vallejo, California, where police fatally shot 20-year-old rapper Willie McCoy on Feb. 9. McCoy was allegedly found unconscious in his car in the Taco Bell's drive through lane. Police said he woke up, reached for the gun, and six officers opened fire. Photo copyright Scott Morris. All rights reserved.
https://www.scottmorris.news/2019/02/crowd...
Add Your Comments
Support Independent Media
We are 100% volunteer and depend on your participation to sustain our efforts!