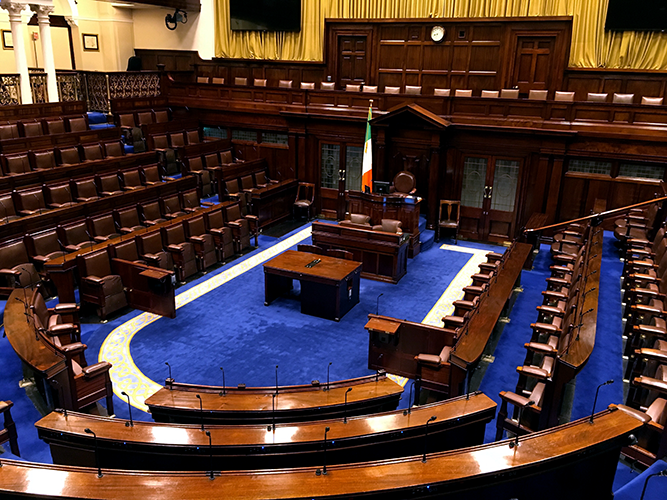 The Control of Economic Activity (Occupied Territories) Bill, originally proposed by Senator Frances Black, was passed in the Irish Senate back in January 2018. On Thursday, Irish MP Niall Collins, of the Fianna Fail opposition party, introduced the bill in the lower House (Dail Eireann), where it passed by a margin of 78 votes to 45, with three abstentions.

The bill declares that it seeks to ‘give effect to the Irish state’s obligations under the Fourth Geneva Convention relative to the protection of Civilian Persons in Time of War and under customary international humanitarian law.’

The Irish governing party, Fine Gael, voted against the bill, claiming its passage would harm Irish-Israeli relations, while also endangering Ireland’s relationship with the United States. Parliamentarians had faced intense lobbying from US congressional opponents of the legislation, yet still voted for the bill in a clear demonstration of opposition cross-party support.

Responding to government threats that opposing US policy would lead to economic retaliation, Mr. Collins said that the US had to ‘clean up its act’ in relation to its social and moral responsibilities. ‘We cannot give it a free pass on everything simply because it provides us with jobs,’ he argued.

As happened after the passing of the Senate bill, the result of the lower house vote drew an immediate and predictable response from the Occupying Authorities. The Irish ambassador was summoned, as Prime Minister Netanyahu declared Israel to be ‘outraged’ by a bill he described as ‘anti-Semitic’. Meanwhile, the foreign ministry said it constituted ‘an expression of pure hostility’ and a ‘clear expression of obsessive discrimination.’

The latest developments in Ireland reflect a continued support of the Palestinian cause across the country. Sligo and Dublin councils recently flew the Palestinian flag to commemorate the expulsion of 750,000 Palestinians from their land in 1948, while the town of Tralee, in County Kerry, is in the process of twinning with Beit Sahour.

Despite the bill still having a number of stages to pass through, Thursday’s vote has effectively ensured it will eventually be signed into law.
http://imemc.org/article/irish-bill-bannin...
Add Your Comments
Support Independent Media