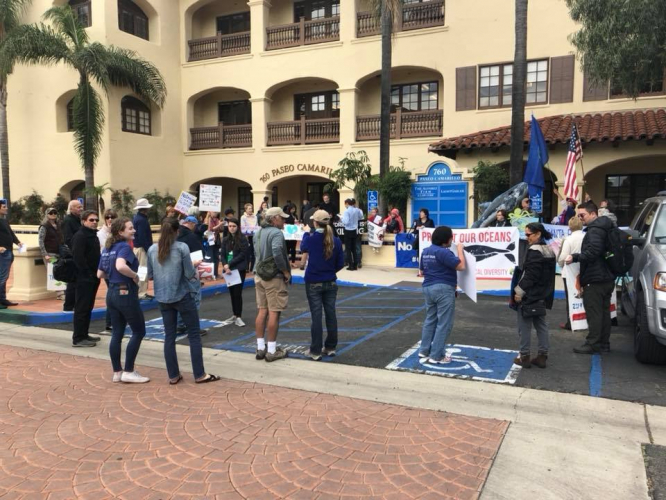 original image (960x720)
Sacramento - The oil industry and environmental leaders in California both marked the 50th anniversary of the Santa Barbara Oil Spill, but they  did it in very different ways.

Catherine Reheis-Boyd, President of the Western States Petroleum Asssociation and former Chair of the Marine Life Protection Act (MLPA) Initiative Blue Ribbon Task Force to create so-called "marine protected areas" in Southern California, used the fiftieth anniversary of the spill to claim that the oil industry’s “number one priority” is “maintaining the safety and environmental integrity in the communities where we operate.”

"As we mark the 50th anniversary of the tragic Santa Barbara oil spill, it is important that we remember our coastal communities most affected by this incident and how they’ve inspired not only reform and innovation but a global movement to support environmental protection,” said Reheis-Boyd in a statement.

“In that spirit, the employees of California’s oil and gas industry are fervently committed to continuous safety improvements in all of our operations, whether that be through innovative technologies or by partnering with the dozens of federal, state and local agencies that regulate oil & gas operation in our state. Our number one priority as an industry is in maintaining the safety and environmental integrity in the communities where we operate,” said Reheis Boyd.

On the other hand, environmental advocates marked the 50th anniversary of the spill by protesting outside the Bureau of Ocean Energy Management’s Pacific regional office, the federal office working to expand offshore drilling in U.S. waters, in Camarillo, California. Organizers of the protest included the Center for Biological Diversity, Greenpeace, Surfrider Foundation, Food and Water Watch, and Citizens for Responsible Oil and Gas.

“The Trump administration’s Bureau of Ocean Energy Management has continued to work on this five-year leasing plan and communicate with the oil industry during the current federal government shutdown, despite taking no other public input,” according to a press release from the coalition. “The offshore spill that began Jan. 28, 1969 in the Santa Barbara Channel gushed more than 3 million gallons of oil and killed thousands of marine animals and birds. Public outrage over the spill helped spark the modern environmental movement and passage of the country’s most significant environmental laws.”

“President Trump last year proposed expanding offshore drilling into most U.S. oceans, including offering the first leases in the Pacific Ocean since 1984. The next draft of the five-year offshore leasing plan could be released at any time. The plan calls for the first new offshore leases to be offered in hazardous Arctic waters later this year,” the groups stated.

Blake Kopcho, an organizer with the Center for Biological Diversity, pointed out that offshore oil drilling has “taken a devastating toll on our country over the past 50 years.”

“We need to learn from that history instead of adopting a reckless plan that’s doomed to repeat it. Our coastlines and climate can’t take another Santa Barbara spill or Deepwater Horizon disaster. Rather than working to fulfill the oil industry’s wishlist during this government shutdown, we need to permanently shut down offshore drilling,” explained Kopcho.

Tomás Morales Rebecchi, senior Central Coast organizer with Food & Water Watch, discussed how the California coast is both threatened by the proposed opening of federal leases — and the offshore drilling that expanded under existing leases under the Jerry Brown administration. He urged Gavin Newsom to break with the Brown administration’s environmentally destructive policies by “by ending drilling in California state waters and onshore throughout the state.”

“The 50th anniversary of the Santa Barbara oil spill is a grim reminder of how far we have to go in stopping not only offshore drilling, but onshore oil and gas expansion as well,” said Morales Rebecchi.  “If Gov. Gavin Newsom wants to lead opposition to the Trump administration’s plans to expand dangerous offshore drilling, he should start by ending drilling in California state waters and onshore throughout the state. The vibrant environmental movement sparked by this disaster so many years ago, which includes local communities fighting drilling in their backyards, would welcome his support.”

While the Governor’s Office press releases and many media outlets touted former Governor Jerry Brown’s credentials as a “climate leader,” Brown Administration regulators issued about 238 permits for new state wells in existing offshore leases, within three miles of the coast. Oil production continued from 1,366 offshore wells in existing leases, according to the California Department of Conservation data analyzed by the Fractracker Alliance in 2017. For more information, go here: http://www.fractracker.org/...

On September 8,  2018, Brown signed two bills, SB 834 and AB 1775, to block new federal offshore oil drilling along California’s coast, but consumer and environmental justice advocates pointed out that the state needs to also to stop the expansion of new offshore drilling in state waters, where the state controls four times the number of wells that the Donald Trump does.

“During his administration, Brown issued more than 20,000 permits to drill new oil and gas wells in California, and that includes more than 200 permits for off shore wells in state waters -- wells within 3 miles of the California coast,” said Jamie Court, President of Consumer Watchdog.

The state under Brown — and now under Gavin Newson - controls four times as many offshore oil wells in state waters as Trump’s federal government controls in California, according to Court. You can view the map showing the location of wells here: http://brownvtrumpoilmap.org

The reason why Big Oil has been been able to expand offshore and onshore drilling in California in recent years is simple: deep regulatory capture - the capture of the regulators by the regulated — by the Western States Petroleum Association, oil companies and other corporate lobbies. If you want to know the industries, organizations and people that control California, the Western States Petroleum Association (WSPA, the trade association for the oil industry and the largest and most powerful corporate lobbying organization in the state that has its headquarters in Sacramento, is right at the top of the list.

This translates to an average of $2.7 million per month – $90,000 per day – according to a report compiled and written by William Barrett of the Lung Association in California: http://www.lung.org/…

On January 31, 2019, the lobbying expenses for 2018 by the oil industry will be posted on the California Secretary of State's website. It will be interesting to see what the oil industry spent on lobbying in 2018.

§Energy contradictions are best solved by ending dependence of fossil fuels.
by Unity Jack for Mother Earth
Saturday Feb 2nd, 2019 1:14 PM
California needs to re-tool the industrial revolution to renewable energy such as wind, tidal, and solar power that transforms to electricity, and is more power than all fossil fuels combined. Solar panels on all roof tops, and in all building construction codes would relieve all stress from burn-out of fossil fuels, and stop most of the global warming that is heating the atmosphere beyond natures ability to sustain ecological balances of the organic and inorganic webs-of-life globally.
That is the oxygen is being made into carbon-dioxide-CO2, by burning of coal, gas, oil, and nuclear fission radioactive poisoning. That pushes an inevitable burn-out and poisoning of our planets livability. California and the world needs a new correction of the entire industrial revolution to sustainable balances of the organic and inorganic energy which will bring the atmosphere back to plus valance of oxygen so liberation path can again attain to victory for the webs-of-life planet wide.
Stop the mass die-off of species, and the worst yet burn-out of oxygen before the 'no return axis' takes place. You yet have a world to win!! Elect women equally by fifty-fifty one man and one woman per constituency as Gender Parity at all levels possible. Workers of the world unite, is the way to peace on Earth and the proper foreign policy of the world to sustain the organic life webs!
Add a Comment
Support Independent Media