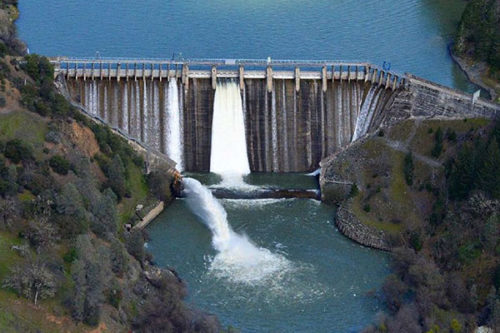 San Francisco — The outlook for salmon and steelhead migrating once again into tributaries of the Upper Eel River watershed to spawn — after being blocked by Scott Dam for many decades — became considerably brighter on January 25.

In a move welcomed by fishing and environmental groups, the Pacific Gas and Electric Company (PG&E) submitted a letter to the Federal Energy Regulatory Commission (FERC) notifying the agency of its intent to withdraw its application to relicense the Potter Valley Project (PVP) — and ending its efforts to sell off the project’s two dams and associated diversion works.

The letter was sent at critical time for the embattled utility. On January 21, PG&E secured $5.5 billion in credit as it prepares to file for two-year Chapter 11 bankruptcy, according to CNBC (https://www.cnbc.com/2019/01/22/pge-braces-for-anticipated-two-year-bankruptcy.html).

The PVP diverts water from the Eel River into the East Fork of the Russian River in Potter Valley, Mendocino County. Scott Dam currently blocks salmon and steelhead trout from accessing at least 124 river miles of pristine spawning and rearing habitat in the Mendocino National Forest, impacting coastal salmon fishing jobs from Monterey to Oregon.

In a statement, PG&E said it “will expeditiously cease all activities related to the relicensing of the Project. Our decision to cease Project relicensing will also result in the stoppage of our efforts to sell the Project via the Request for Offers (RFO) process.”

“Although the timing is unclear at this point, we anticipate that PG&E’s action will result in FERC initiating its Orphan Project process,” the utility said.

An “orphan process” is a process whose parent process no more exists.

“In accordance with the Orphan process, FERC will provide interested parties the opportunity to submit an application for a new Project license,” PG&E continued. “We believe this path will allow interested parties more time to prepare for the acquisition of the Project and the ability to submit a License Application on their own terms rather than assuming PG&E’s current application. If the Orphan process does not result in the issuance of a new Project License, it is expected FERC will order PG&E to prepare and submit a Surrender Application and Decommissioning Plan.”

Meanwhile, PG&E said it “will continue to own and operate the Project in accordance with the terms and conditions of the current Project license and all laws, rules, and regulations governing the operation of the Project until a new license is issued or the Project is decommissioned.”

PG&E also said “it intends to support the Orphan process through provision of work products and information developed to date in the relicensing process to those who apply to FERC for a new Project license.”

"Salmon fishermen have been fighting to free the Eel River from the Potter Valley Project for decades,” said Noah Oppenheim, Executive Director of the Pacific Coast Federation of Fishermen’s Associations (PCFFA). “With new certainty that the project's license will be orphaned by PG&E, we're closer to that goal than ever.”

“The project is an environmental liability and a safety risk for any prospective buyer. The best path forward for this process is an expedited surrender agreement between PG&E, energy regulators, and the stakeholder community, pursuant to partial or complete decommissioning. PG&E can't be allowed to simply walk away from its problems on the Eel River,” Oppenheim concluded.

Friends of the Eel River also welcomed the announcement by PG&E that the utility is withdrawing its formal notice of intent to seek relicensing of the Potter Valley Project before FERC and ceasing its efforts to sell off the two dams and associated diversion works.

“This is by no means the end of the story,” said FOER Conservation Director Scott Greacen. “But this is the turning point. Removal of at least Scott Dam is now more likely than not.”

In its notice to FERC, PG&E admits that “Potter Valley has long been recognized as uneconomic for PG&E’s ratepayers,” and points to “declining energy markets … increased costs associated with anticipated new license conditions, and challenging financial circumstances …” as reasons to withdraw its relicensing application.

However, FOER cautions that the “full picture of the liabilities associated with the Eel River dams has yet to emerge.”

“PG&E may be facing financial reality here, but they have yet to come clean either about the potentially disastrous safety situation at Scott Dam, or about the ecological impacts of the dam on Eel River salmon, steelhead, and lamprey,” said David Keller, FOER’s Bay Area director.

FOER said FERC is now likely to move the PVP to its ‘orphan project’ process. While FOER said the agency “will probably repeat the utility’s apparently unsuccessful effort to find a new buyer for the dams,” the group believes that the ultimate outcome is now likely to be decommissioning and removal of at least Scott Dam, the dam that forms Lake Pillsbury.

“The good news here is that the stakeholders’ group convened by Rep. Huffman to address PVP relicensing has already done most of the work to lay out a truly sustainable solution to needs of both the Russian and Eel River watersheds,” said Greacen. “Now it’s time to move forward with an agreement to remove Scott Dam and restore the Eel River’s fisheries.”

This season is not looking like a good one for Chinook salmon and steelhead on the Eel River. California Department of Fish and Wildlife (CDFW) biologists have counted low numbers of steelhead going over the Eel River Fish Count Station at Van Arsdale Reservoir to date.

However, in 2010 over 2,300 fall run Chinook salmon, the largest num­ber of fish counted at the Van Arsdale Fisheries Station on the Eel River below Cape Horn Dam since CDFW began keeping records, arrived just several months after members of the Round Valley Indian Tribes of Covelo conducted dances and ceremonies to bring back the salmon.

In July of 2010, the Feather Dancers of the Tribes joined Friends of the Eel River (FOER) at a swimming hole in the Hearst area, a few miles downstream of the PG&E Potter Valley diversion (PVP) to the Russian River. For more information, go to: https://theava.com/archives/9382

Photo caption: Scott Flat Dam on the Eel River blocks upstream migration of salmon and steelhead. Photo courtesy of Friends of the Eel River.
Add Your Comments
Support Independent Media
We are 100% volunteer and depend on your participation to sustain our efforts!