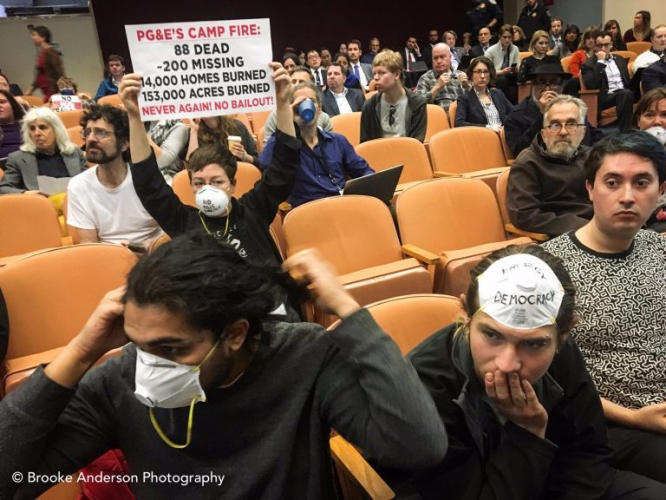 San Francisco, CA: On January 23, the Climate Justice Crew released a fake PG&E website and press release claiming that the former President and Chief Operating Officer, Geisha Williams, donated her complete severance of $2.5 million dollars as her last act in PG&E leadership. The stunt that has since gone viral intended to draw attention to PG&E and Mrs. William’s culpability of the Camp Fire that killed at least 86 people, destroyed more than 18,000 structures, and led to more than $30 billion in potential wildfire liabilities — California’s deadliest and most destructive wildfire on record.

Overwhelming evidence shows that PG&E is solely responsible for starting the recent “Camp Fire” — including PG&E’s own statements. State investigators have also determined PG&E is responsible for at least 16 other fires last fall, 12 of which were deadly, and 11 of which clearly violated laws requiring proper maintenance and safety standards. Yet, the California Public Utilities Commission will soon begin to implement a provision that allows PG&E to pass wildfire costs onto the affected populations instead of the investor-owned San Francisco-based utility — whose net income in 2017 was $1.66 billion and whose former President and Chief Operating Officer, Geisha Williams, recently received $2.5 million in severance despite being in charge during the lethal wildfires of 2017 and 2018.

“We call for PG&E to take complete financial and ethical responsibility for all fires caused by its negligence. The stunt today was meant to draw attention to the spectacular miscarriage of justice that has transpired since the lethal Camp Fire — including the lack of transparency with regards to compensation for victims’ of this tragedy, the way in which PG&E has tried to dodge their debts by proposing a consumer bailout and filing for Chapter 11, and Mrs. Williams’ astronomical severance package,” said the Climate Justice Crew.

The PG&E bankruptcy should serve as a wake-up call for corporations like this to think how about their actions affect masses of people and have contributed towards the climate crisis — a crisis in which we only have 12 years to mitigate.

Climate Justice Crew stands with all residents impacted by the fires and refuses to allow the California Public Utilities Commission President Michael J. Picker and other politicians to bail out PG&E instead of dismantling it. We also recognize PG&E’s role in contributing to the increase in climate catastrophes, like the two-week-long smoke-filled skies over Northern California, by investing in massive fossil fuel infrastructure across California.

“There are alternatives to the monopoly utilities, like the Community Choice Energy project, where the public is in control of the electrical system. We need to democratize energy by putting in the hands of the people, not the corporations driven by profit. If we had decentralized energy — local clean energy — we wouldn’t need the transmission lines that caused the fires in the first place. We’re in a state of emergency where air pollution and climate disasters are more frequently disrupting, displacing, poisoning, and even killing people across the country. We need California to take these issues seriously before it’s too late and that means investing in community-led renewable energy systems that are local and regional — not CEOs and shareholders who make millions and millions in profit no matter what. Left unchallenged, this pattern of institutional and regulatory neglect ensures environmental degradation and climate change hit marginalized groups first and worst,” said the Climate Justice Crew.