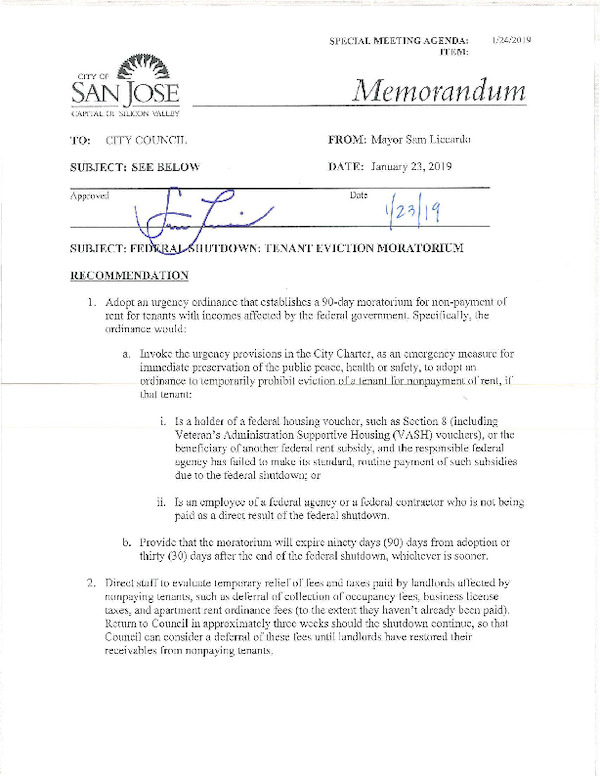 Reportedly, because of the government shutdown over 1,000 affordable housing contracts have been allowed to expire.

According to the Department of Housing and Urban Development (HUD), as of January 19, 2019, there are 6,577 section 8 units in the San Jose City Housing Authority. According to a memorandum the housing authority should have sufficient funding for another six weeks to make payments to the Section 8 landlords (a.k.a. Housing Choice Voucher landlords), on behalf of veterans, low-income, elderly and disabled tenants in the Section 8 voucher program (a.k.a. Housing Choice Voucher Program).

Additionally, as a result of Trump’s government shutdown threatening low-income tenants across the nation, the HUD subsidized project-based contract for Huff Gardens (72 units) in San Jose, has been allowed to expire.

Earlier today, Sam Laccardo, the Mayor of San Jose, sent out a memorandum to the City Council proposing to protect renters being affected by the partial federal government.

Among other issues, on Thursday, January 24, 2019, at 2:30PM, the San Jose City Council, will have a Special City Council meeting involving the eviction proposals, of the mayor, as a result of Trump’s partial federal government shutdown.

According to Sam Laccardo, Mayor of the City of San Jose, in the memo, “Unfortunately, these facts do not protect all our residents whose dependence on federal payments make them vulnerable. First, it's not clear that all of the recipients of the various types of federal rent subsidies have the same eviction protections possessed by Section 8 tenants. Second, we know-both from local legal aid organizations as well as national news reports, such as a January 21 , 2019, New York Times article-that some landlords are demanding tenants to make up the difference resulting from the federal nonpayment of rent subsidies. With 95% of HUD employees furloughed at this time, HUD cannot inform and educate tenants of their rights and landlords of their obligations. We hope that media accounts of the Council's action will do so. Third, employees of federal contractors or agencies do not have any eviction protections. I appreciate CAA and many of its members stepping up to support community members through this difficult time, but not all landlords are CAA members, and not all will participate.”

“Adopt an urgency ordinance that establishes a 90-day moratorium for non-payment of rent for tenants with incomes affected by the federal government. Specifically, the ordinance would:

a. Invoke the urgency provisions in the City Charter, as an emergency measure for immediate preservation of the public peace, health or safety, to adopt an ordinance to temporarily prohibit eviction of a tenant for nonpayment of rent, if that tenant:

1. Is a holder of a federal housing voucher, such as Section 8 (including Veteran's Administration Supportive Housing (VASH) vouchers), or the beneficiary of another federal rent subsidy, and the responsible federal agency has failed to make its standard, routine payment of such subsidies due to the federal shutdown; or

11. Is an employee of a federal agency or a federal contractor who is not being paid as a direct result of the federal shutdown.

b. Provide that the moratorium will expire ninety days (90) days from adoption or thirty (30) days after the end of the federal shutdown, whichever is sooner.

2. Direct staff to evaluate temporary relief of fees and taxes paid by landlords affected by nonpaying tenants, such as deferral of collection of occupancy fees, business license taxes, and apartment rent ordinance fees (to the extent they haven't already been paid).

Return to Council in approximately three weeks should the shutdown continue, so that Council can consider a deferral of these fees until landlords have restored their receivables from nonpaying tenants.”


If this proposal became an ordinance that is passed into law, it would be an important step in protecting federal workers, veterans, low-income, elderly and disabled tenants from eviction during Trump’s government shutdown that is harming millions of people across the nation.

Some Project-Based Contracts HUD Allowed To Expire In December:

On January 22, 2019, the Campaign for Housing and Community Development Funding, released the latest report on the impacts of the government shutdown on affordable housing.

Also earlier today, the National Low-Income Housing Coalition (NLIHC) started a letter campaign to demand an end to the government shutdown and to resume funding for affordable housing.

On January 19, 2019, the National Housing Law Project (NLHP), sent out a release about the “rights of federally-assisted residents,” during the government shutdown.

Reportedly, on next Tuesday morning, the Washington, D.C. City Council will vote on the "Federal Worker Housing Relief Emergency Declaration Resolution of 2019."

Responding to the government shutdown, now in its second month, that continues to leave hundreds of local workers without pay, the San Jose City Council passed an emergency ordinance to prevent landlords from evicting tenants affected by the shutdown and formally approved a short-term loan program for airport workers struggling to pay rent and other living expenses.

In a special meeting on Thursday afternoon, the council unanimously voted (with several members absent) to protect renters from evictions. The ordinance goes into effect immediately and will last for 90 days or 30 days after the shutdown ends, whichever is first. If the shutdown lasts longer, the council could choose to extend the ordinance.