Another Form of Life Is Possible: films on resistance 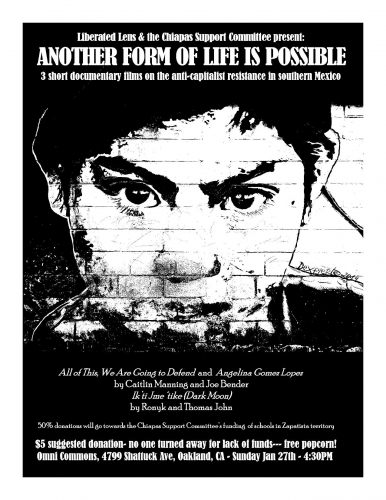 Import event into your personal calendar
Date:
Sunday, January 27, 2019
Time:
5:00 PM - 8:00 PM
Event Type:
Class/Workshop
Organizer/Author:
Liberated Lens, Chiapas Support Committee
Email:
liberatedlens [at] omnicommons.org
Location Details:
Omni Commons
4799 Shattuck Ave
Oakland
Liberated Lens Film Collective and Chiapas Support Committee presents a program of documentary shorts on the anti-capitalist Resistance in Southern Mexico.
The Resistance shares many of the principles and goals of the Zapatistas movement: autonomy from the capitalist economy, communalist self-government rooted in indigenous traditions, an end to the subordination of women, respect for the natural world. Indigenous women are at the forefront of many of these ongoing struggles.

*All of This, We Are Going to Defend
2018, 15:56
by Caitlin Manning and Joe Bender
A Tzetlal community gathers in the mountains of Chiapas, one of the most biodiverse areas of the world. They share information, recuperate and develop techniques of agroecology (permaculture), while resisting the industrial farming practices promoted by the government and Monsanto/Bayer.

*Angelina Gomez Lopez
2017, 11:06
by Caitlin Manning and Joe Bender
Angelina Gomez Lopez, an indigenous woman potter from Amatenango, Chiapas, is part of “the Resistance”. Her journey towards liberation began when she joined a women’s group organized by the Diocesian Coordination of Women.

*Ik’ti Jme ‘tike (Dark Moon)
2013, 50:25
Experimental documentary by Ronyk and Thomas John
The daily life of Maya poet Angelina Suyul is portrayed using an unconventional audiovisual language that approaches both the personality and identity of its female protagonist as well as the meanings of her poetry.

The screening will be followed by Q and A with the filmmakers and a discussion on the current situation in Chiapas with members of the Chiapas Support Committee.

Chiapas Support Committee will be selling crafts by Zapatista artisans. Profits from the sales, and half of the donations at the door, will go towards a fund to build schools in Zapatista territory. For more info on this project and for updated information on Zapatistas, see https://chiapas-support.org/


$5 suggested donation- no one turned away for lack of funds--- free popcorn.

Doors open at 4:30, films start at 5pm.
Added to the calendar on Fri, Jan 11, 2019 2:42PM
Add Your Comments
Support Independent Media
We are 100% volunteer and depend on your participation to sustain our efforts!