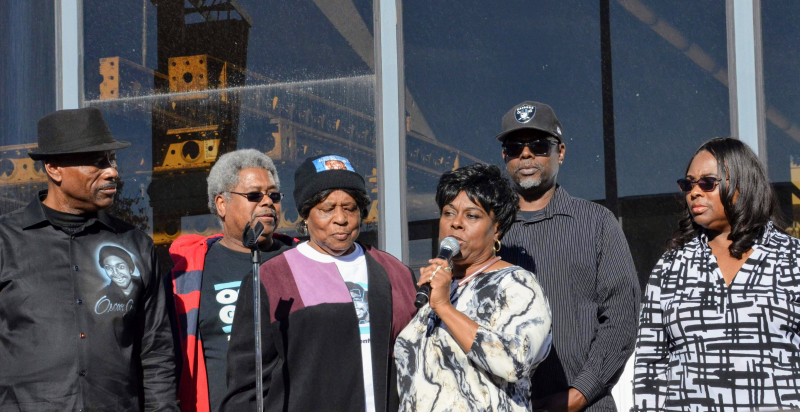 original image (4268x2200)
Grant was killed by Oakland BART police on Jan. 1, 2009. In response, the streets surged with massive demonstrations against police terror and the murder of Black and Brown youth.

At the rally [on January 1], speakers recalled both the death of the 22-year-old African- American man and also the movement against police murders that developed in its aftermath. Wanda Johnson, the mother of Oscar Grant, said: “People know Oscar all around the world. I believe that Oscar’s life was a catalyst to change our society. It brought an awareness, and it has caused us to examine what has happened.” Johnson has helped organize a national movement involving mothers of Black and Brown men and women who have suffered “death by cop.”

Cephus Johnson, Grant’s uncle (known by all as “Uncle Bobby”), recalled that Grant’s case made history when bystanders took out their cell phones and recorded his nephew’s murder by BART cop Johannes Mehserle.

Mehserle was later convicted of involuntary manslaughter and sentenced to two years in prison for Grant’s murder.

“For the first time in California state history, an officer was arrested, charged, convicted and sent to jail — that is historical,” said Uncle Bobby. “Let us all remember that it’s your vigilance that has brought about this change.”

Cat Brooks, a founder of the Anti-Police Terror Project (APTP), former candidate for mayor of Oakland and a longtime community activist, talked about the early days of the movement for justice for Grant. Brooks paid tribute to Wanda Johnson and the Grant family who shared Oscar and his legacy with the movement.

Brooks recalled how this movement not only impacted Oakland but spread: “We stayed in the streets for three years fighting for justice. We were emailing and Facebooking with people around the world. People on the other side of the world were holding signs that said, ‘We are Oscar Grant.’”

Brooks noted, “Our legacy kicked off the next iteration against police terror in this country and around the world. What has stayed the same is that we are still target practice, and the state maintains its insane practice of overincarceration, overpolicing and overkilling our communities.”

Brooks urged people to get involved in the movement against police terror and for justice for all victims of racism and police violence.

https://www.workers.org/2019/01/07/on-tent...
Add Your Comments
Support Independent Media
We are 100% volunteer and depend on your participation to sustain our efforts!