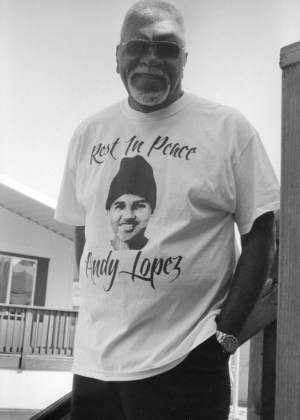 
On Tuesday, Dec. 18, 2018, five years later, the Board of Supervisors for the county reached a settlement with Lopez’ parents for $3 million. This settlement does not mean Erick Gelhaus is clear of any civil liability.

Gelhaus was, of course, disgustingly cleared of any criminal liability after a five-month-long investigation by the district attorney and never went to trial. He still works for the Sheriff’s Department, but there is a civil court case set for July of 2019.

There has been a $3.5 million park built in Andy’s honor which was completed this year in his neighborhood. Activists, the community and his family and friends never stopped demanding justice for Andy Lopez. Working together constantly and putting unrelenting pressure on local government is what made that park a reality.

Elbert “Big Man” Howard was so very affected and upset by this young boy’s killing, coming so quickly on the heels of the wonderful celebration, that he was determined to fight for justice for Andy and publicize his case. Although his health made this difficult for him, he appeared at a couple of protests. Over the years, he never stopped writing about Andy, talking about him to anyone and everyone and keeping this child’s killing at the hands of law enforcement in the public eye.

Big Man summons his strength despite his declining health to testify on behalf of Andy at the Sonoma County Board of Supervisors on Jan. 7, 2014. – Photo: Vesta Copestakes

Big Man attended community meetings, went before the Board of Supervisors and continued to talk and write about Andy until he got too ill to do so. Although all police abuse and killings resonated with Big Man, the killing of Andy Lopez was an atrocity that had occurred right after his event, on Oct. 22, the National Day of Protest Against Police Abuse. It was the killing of a child in his community, a very few minutes away from our home, and Big Man couldn’t stop fighting for justice. Big Man loved you, Andy Lopez.

Although this will never bring Andy back, although the man who killed him is, as of yet, still unpunished, I would hope this settlement would, as the creation of that park did, give Big Man some peace. My heart, as Big Man’s was, is with Andy, his family, friends and this community.

Although this will never bring Andy back, although the man who killed him is, as of yet, still unpunished, I would hope this settlement would, as the creation of that park did, give Big Man some peace.

Arnoldo Casillas, the attorney representing Andy’s family, “said Lopez’s parents were pleased with the settlement and the lasting impact the civil rights lawsuit has had both locally and countrywide. Most notably, the lawsuit set a precedent at the U.S. Supreme Court in cases where officers use deadly force on a person with a replica gun, he said,” according to the Press Democrat.

“A petition filed by the county to the nation’s highest court in the case was rejected in June, keeping intact a lower court’s decision that indicated Lopez posed no immediate threat to Gelhaus and that a jury should decide if excessive force was used in the shooting,” the newspaper reported.

Casillas told the Press Democrat, “That precedent is going to be on the books forever, and for them, through that, Andy is living forever.”

Activist Carol Hyams-Howard, widow of Elbert “Big Man” Howard, co-founder of the Black Panther Party and first editor of The Black Panther newspaper, can be reached at carolehyams@gmail.com.

https://sfbayview.com/2019/01/andy-lopez-s...
Add Your Comments
Support Independent Media
We are 100% volunteer and depend on your participation to sustain our efforts!