With Both Marx And Jesus: Liberation Psychology And The Refugee Question 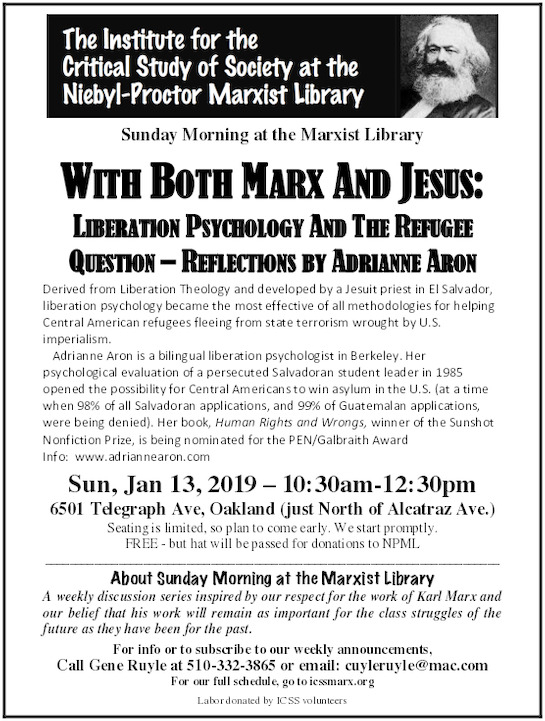 Sunday Morning at the Marxist Library

With Both Marx And Jesus: Liberation Psychology And The Refugee Question – Reflections by Adrianne Aron

Derived from Liberation Theology and developed by a Jesuit priest in El Salvador, liberation psychology became the most effective of all methodologies for helping Central American refugees fleeing from state terrorism wrought by U.S. imperialism.   Adrianne Aron is a bilingual liberation psychologist in Berkeley. Her psychological evaluation of a persecuted Salvadoran student leader in 1985 opened the possibility for Central Americans to win asylum in the U.S. (at a time when 98% of all Salvadoran applications, and 99% of Guatemalan applications, were being denied). Her book, Human Rights and Wrongs, winner of the Sunshot Nonfiction Prize, is being nominated for the PEN/Galbraith Award Info:  http://www.adriannearon.com

For info or to subscribe to our weekly announcements,
Call Gene Ruyle at 510-332-3865 or email: cuyleruyle [at] mac.com
For our full schedule, go to icssmarx.org
Labor donated by ICSS volunteers
END_OF_DOCUMENT_TOKEN_TO_BE_REPLACED
Added to the calendar on Sun, Jan 6, 2019 5:56PM
Add Your Comments
Support Independent Media
We are 100% volunteer and depend on your participation to sustain our efforts!