Newswire
Calendar
Features
Home
Donate
From the Open-Publishing Calendar
From the Open-Publishing Newswire
Indybay Feature
Publish to Newswire
Add an Event
Related Categories: California | San Francisco | Government & Elections
Progressive slates are formed for the upcoming ADEM election
by Steven Mazliach
Saturday Dec 29th, 2018 3:41 PM
Make sure to vote in the upcoming ADEM elections in the Democratic party to elect progressive representatives to the statewide body.
There is a progressive slate in each Assembly District running in this year’s election during the Assembly District Election Meeting (ADEM). Voters in our communities are heavily organizing for this event, which will elect delegates to the California Democratic Party. Many members of the California Democratic Party see these elections as "inside baseball" and not accessible to grassroots Democrats. Each slate hopes to bring the elections to the voters, and bring progressive values to the state party.

The slate running for Assembly District 17 is:

The AD 17 Reform Slate is competing against Assembly member David Chiu's "United Resistance" slate. Following the progressive victory in AD 17 two years ago, we expect this race to be competitive and highly contentious, with turnout predicted to reach 1,500 people.

The slate running for Assembly District 19 is:

This slate is in coordination with Assembly member Phil Ting. Following a challenge from progressive Democrats two years ago, Assembly member Ting and the delegates formed a unity slate for this election cycle. 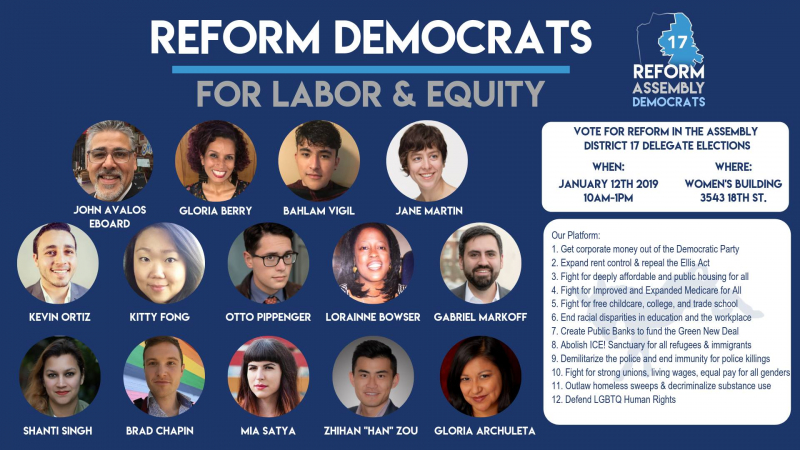