by Robert Norse (rnorse3 [at] hotmail.com)
In the last regular scheduled Council meeting of the year outgoing Mayor Terrazas won't put on the agenda an item to extend the Rent Freeze/Just Eviction Protection that the Council passed overwhelmingly in February. That measure expires on today December 11th once the election results are accepted by the Council. It leaves tenants vulnerable to exorbitant rental increases. I have written several letters demanding the "progressive" Council members (who constitute a majority in the middle of the evening session) act to raise awareness and muster public pressure to stop this. 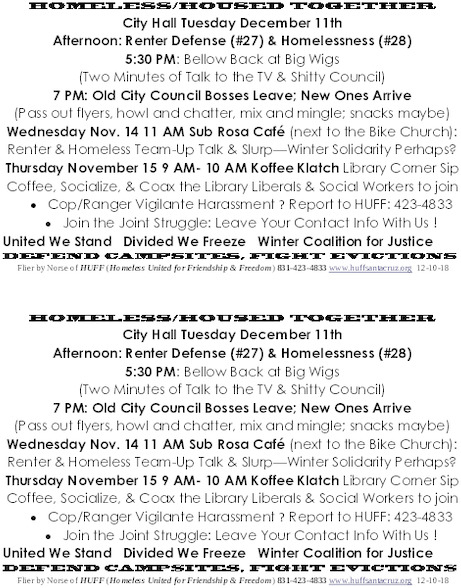 Download PDF (475.6KB)
COUNCIL PROCEDURE
City ordinance mechanics require an ordinance be put through two "readings' (i.e. be presented at Council at two successive meetings) and then, customarily, await until another month before going into effect. If this procedure is followed with extending the freeze/eviction ordinance, it may mean (a) not introducing it until the second week in January, (b) not passing it until the fourth Tuesday in January, and (c) its not going into effect until a month later in February.

So if you're going to get the freeze/eviction ordinance up for a vote, the Council must act quickly. The first step requires it be put on the agenda. The Mayor makes up the agenda the Wednesday before the Tuesday Council meeting. If he repeatedly blocks it from the agenda, it's important that this be made very clear to the community. The potential for extensive evictions and rent raises in December, January, and February is very real.

Full disclosure: even with the freeze/eviction ordinance in place these last ten months, I understand there have been numerous instances of illegal raises and evictions. The lack of enforcement mechanisms is a problem with that ordinance (even if extended). So any replacement ordinance needs to have teeth or some way of holding off landlord greed.

INADEQUATE DECEPTIVE "RELOCATION ASSISTANCE FOR DISPLACED TENANTS" BILL
This lack of enforcement is even more so with the fluff-and-puff renter relocation assistance ordinance--item #29 on today's agenda. It's the only thing even distantly related to the rent profiteering issue. The proposed law makes the relocation subsidy retroactive to November 27th. It also extends the required eviction notice to 90 days.

The 90-day eviction delay provision prompted yowls of outrage from the landlord and real estate lobby. It frightened City Council into holding an unscheduled Closed Session and to stall further at their 12-4 meeting. As a consequence, we have the all-day longest-ever meeting today. Conveniently enough for the pro-landlord outgoing Mayor, no time certain when the item will come up--sometime between 9 AM and 5:30 PM. Good luck to anyone who wants to speak on it.

This can be done by demanding a full and honest discussion on the agenda. Since the regular agendas are made up a week in advance, we asked Brown to so advice the Mayor to do so for December 4th (and if that failed, for December 11th).

CITY ATTORNEY MISLEADS ON EMERGENCY LAW BAN
Emergency ordinances do require a supermajority of 5 votes and an "emergency finding". Both of these can be presented at the City Council meeting where the ordinance is presented. That's my understanding and my recollection of past Council procedure on the rare occasions when it used the emergency procedure.

MAYOR REFUSES TO PUT FREEZE/EVICTION ON THREE AGENDAS
Outgoing Mayor Terrazas refused to put on the 11-27 agenda, even for discussion, much less vote, the rent freeze/just eviction protection that many in the community are demanding. No Councilmember specifically moved to have the item agendized as an emergency motion at that session.

Before, 11-27, according to Terrazas, Brown said nothing to him about putting the freeze/eviction on the 11-27 agenda. At the actual 11-27 meeting, Councilmember Brown did say that was her preference to have the freeze/eviction extension agendized as an emergency measure. and asked the City Attorney about it at the meeting. He incorrectly advised the Council (see First Amendment Coalition link below) that doing so would violate the "notice" requirement of the Brown Act. She and Krohn made no formal motion for an emergency action.

This was a mistake. Acting to raise the issue loudly and clearly is important both politically and educationally--to mobilize those supporting justice for renters before December 11th (and after).

COMPOUNDING THE ERROR: CONTINUED SILENCE
The next day (on 11-28)HUFF phoned and wrote to Councilmember Sandy Brown We requested her to write to Mayor Terrazas asking him to put the freeze/eviction protection extension on the 12-4 Special Agenda. We asked this be done in concrete e-mail for so that it could be documented he was approached and refused. We believed this would put legitimate pressure on him to act either on December 4th or December 11th or rouse the supporters to raise the issue with incoming Mayor Watkins.

Brown never answered our e-mail or phone calls. On 11-28, Terrazas spoke with me and said that Brown had not approached him by e-mail, phone, in person, or otherwise with a request the item be put on the November 21st agenda. On 12-4 at the Council meeting, I raised this issue publicly at the Public Comment period. Was someone lying? Not remembering? Who knows?

At the 12-4 meeting, Brown reported she'd spoken with me after the 11-27 meeting. I have no memory of any such conversation, nor any record of response to any of the e-mails I sent her subsequently. On 12-4, she also said she'd spoken with the City Manager to get the item on the 12-4 agenda. Perhaps she had. But it's the Mayor not the City Manager who makes up the agenda as she well knows.

COUNCILMEMBER TIMIDITY MEANS AN END TO RENTER PROTECTION
So there is no freeze/eviction item on this agenda, just a 2nd reading of the inadequate relocation assistance item. Nor any indication that Brown or Krohn have made a documented demand to Terrazas that he do so. Nor have they expressed any intention of making an emergency motion at the 12-11 meeting.

A letter to Krohn requesting he clarify when he was holding his usual morning-before-City-Council Monday orientation-for-the-public meeting prompted no responsive reply as to its time and place.

On 11-27, there was agreement on getting staff to agendize emergency action on 12-11 for the weaker relocation assistance/eviction delay ordinance. Lacking enforcement provisions and rent control caps, it seems less likely to contain landlord rent escalation and willful eviction than the February rent freeze/just eviction protection law.

And three Council members could press the new Mayor (Watkins) to call a special or emergency session of Council, At that session, pass a strengthened freeze/just eviction law allowing for the time to hammer out a more permanent renter protection law and discourage if not prevent fraudulent evictions and hold down rents while real community dialogue (not just out-of-town landlord cash and a token public comment process) takes place.

Public outcry against a predetermined staff outcome can have a real effect if it is persistent enough, loud enough, and broad enough. This can happen in Council chambers if the Council insists on ignoring the basic needs of a majority of those who live in this community (i.e. renters).

BEYOND DECEMBER 11TH TENANT ORGANIZING AND SOLIDARITY: REAL PRESSURE SHOULD BE PUT ON THE REAL PROFITEERS !
What's really needed is tenant mobilization for more forceful measures over the holidays including renter defense, exposure and protest of profiteering landlords who evict, and picketing of the landlord association-related businesses.

HUFF and Santa Cruz Tenants Association will be having a joint meeting December 12th, which we fear will be Eviction Day, given the lack of anything with teeth on the December 11th City Council agenda. Those interested in establishing tenant defense and looking for a coalition between the homeless and threatened renters should join us at the Sub Rosa Cafe at 703 Pacific Ave. at 11 AM Wednesday the 12th of December.

If you'd like to be on an emergency phone tree/mailing list to come together quickly if a landlord moves to improperly evict or rent gouge over the winter, sign up with us at the City Council meeting tonight, or e-mail rnorse3 [at] hotmail.com . 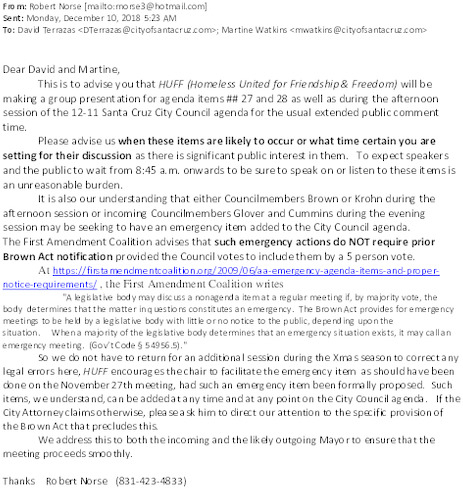 Download PDF (524.0KB)
No response was received as of early 12-11.
§HUFF Letter to Sandy Brown 11-28 Requesting Action
by Robert Norse 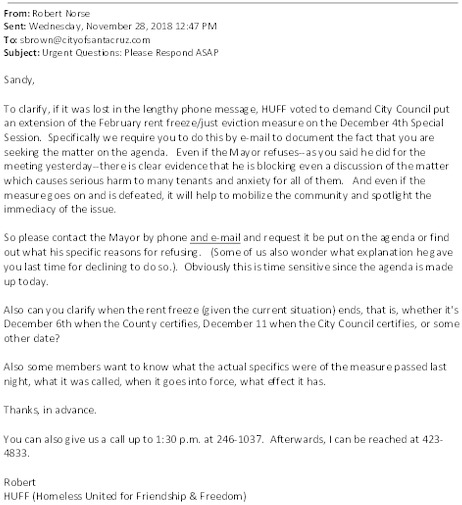 Download PDF (395.2KB)
No response was ever received.
§Letter to Brown and Krohn Seeking Action on December 11th
by Robert Norse 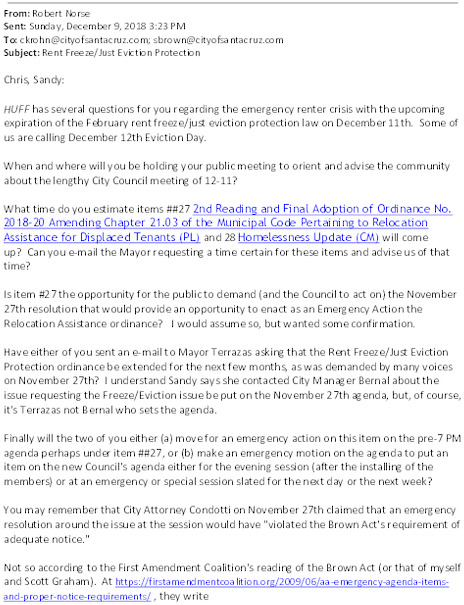 Download PDF (544.7KB)
Neither Krohn nor Brown announced any Monday meeting, nor answered the questions posed in the letter.
Add Your Comments
Support Independent Media
We are 100% volunteer and depend on your participation to sustain our efforts!