One initiative of the Amah Mutsun Tribal Band is the Amah Mutsun Land Trust, where members are able to access, protect, and steward lands that are integral to the tribe's identity and culture. The Amah Mutsun also work actively to educate the public about the horrors of the California mission system. They strongly opposed the Sainthood of Junipero Serra.

Presently, the Amah Mutsun are working to protect Juristac, a sacred area to the tribe.

Juristac (Huris-tak) lies at the heart of the ancestral lands of the Amah Mutsun Tribal Band near Gilroy, California. For thousands of years, Mutsun ancestors lived and held sacred ceremonies at this location in the southern foothills of the Santa Cruz Mountains, above the confluence of the Pajaro and San Benito rivers. The cultural landscape encompassing Juristac is known today as the Sargent Ranch. An investor group based in San Diego purchased the land at a bankruptcy auction and is currently seeking to develop a 320-acre open pit sand and gravel mining operation on the property.

The Amah Mutsun Tribal Band vehemently opposes the proposed mining project and is asking the public to join in standing for the protection of their sacred grounds.


The Universal Declaration of Human Rights (UDHR) is a milestone document in the history of human rights. Drafted by representatives with different legal and cultural backgrounds from all regions of the world, the Declaration was proclaimed by the United Nations General Assembly in Paris on 10 December 1948 (General Assembly resolution 217 A) as a common standard of achievements for all peoples and all nations. It sets out, for the first time, fundamental human rights to be universally protected and it has been translated into over 500 languages. 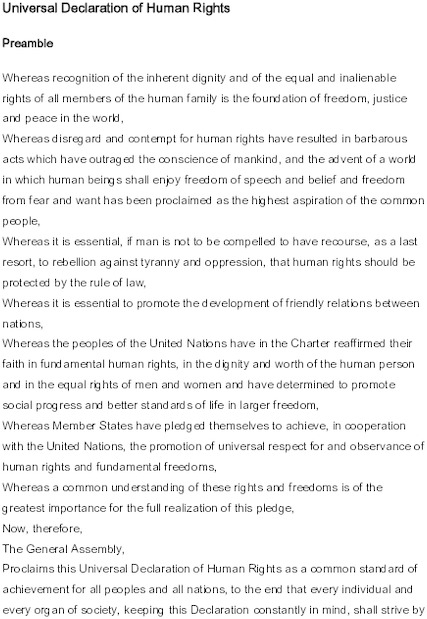 Download PDF (115.5KB)
Add Your Comments
Support Independent Media
We are 100% volunteer and depend on your participation to sustain our efforts!