Macron Out NOW! And Trump Should Be Next! US Working People Support French People

Macron Out NOW! And Trump Should Be Next!
US Working People Support The Struggle of the French People
To Throw Out Macron

Hundreds of thousands of French workers, students and farmers have been shutting down roads and protesting against massive tax increases on the working class and capitalist austerity with privatization and outsourcing of jobs. The “Yellow Jackets” movement is a spontaneous popular anti-capitalist protest that was organized through social media but is now getting increased support from trade unionists and some unions.

The reactionary Macron government has met these protests with rubber bullets and grenades that have seriously injured the protesters. Macron has also now ordered armored vehicles in the streets to shut down this protest. The French union leadership has refused to mobilize their members to support these protests despite the fact that their members face massive attacks including on their working conditions and benefits along with privatizing public services. While the government is cutting social benefits and raising taxes on the working class they are increasing funding for the military and police to repress the people of France.

American workers also face similar attacks on our jobs, housing costs, and health and education rights. The Republicans with the support of the Democrats have pushed privatization and deregulation and also more militarization of the police and the world. While workers have trouble surviving, Trump with the support of the Democrats is spending more than $750 billion on wars around the world. Macron as well is now calling for a new army is pushing the same agenda globally as the major capitalist powers move toward economic and trade war with each other.

The US working people need to the following lead of the French people and begin organizing with mass actions to defend our healthcare, housing, education, and jobs. The trade union leadership in the US like the union leadership in France is terrified of mobilizing against these attacks. In fact, they are blaming the Russians for this crisis instead of the capitalist system, which they support. They are also supporting the growing trade war against China and many other countries. Our enemies are not the people of the rest of the world but the billionaires and corporate criminals who run the US and the world.

The union bureaucracy also wants to make NAFTA 2.0 USMC better under the Trump government. The anti-labor corporate trade agreements are designed to destroy labor and human rights and blame the migrants, Latinos, African Americans, Asians and other minorities for this crisis. 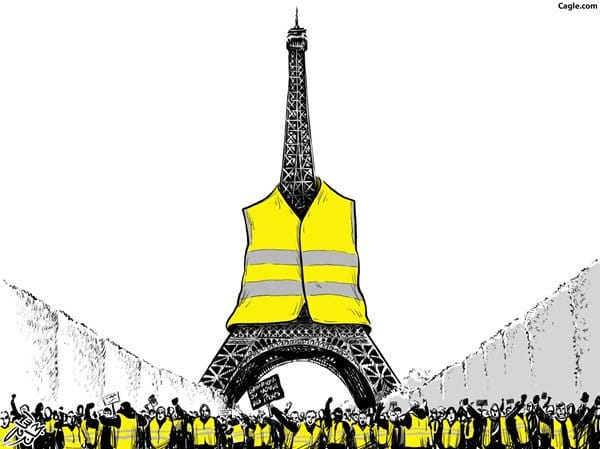 What do the protesters in France want? Check out the 'official' Yellow Vest manifesto

Sott.net
Sat, 08 Dec 2018 17:38 UTC
The following list of demands has been circulating among French social media users in recent days. We do not know its exact origins or author(s), but it seems to have first appeared here on December 5th. You'll have to click on the image to enlarge it if you want to read it in French. We've translated it into English (in summary, not word-for-word) below...
gilets jaunes manifesto

Economy/Work
A constitutional cap on taxes - at 25%
Increase of 40% in the basic pension and social welfare
Increase hiring in public sector to re-establish public services
Massive construction projects to house 5 million homeless, and severe penalties for mayors/prefectures that leave people on the streets
Break up the 'too-big-to-fail' banks, re-separate regular banking from investment banking
Cancel debts accrued through usurious rates of interest
Politics
Constitutional amendments to protect the people's interests, including binding referenda
The barring of lobby groups and vested interests from political decision-making
Frexit: Leave the EU to regain our economic, monetary and political sovereignty (In other words, respect the 2005 referendum result, when France voted against the EU Constitution Treaty, which was then renamed the Lisbon Treaty, and the French people ignored)
Clampdown on tax evasion by the ultra-rich
The immediate cessation of privatization, and the re-nationalization of public goods like motorways, airports, rail, etc
Remove all ideology from the ministry of education, ending all destructive education techniques
Quadruple the budget for law and order and put time-limits on judicial procedures. Make access to the justice system available for all
Break up media monopolies and end their interference in politics. Make media accessible to citizens and guarantee a plurality of opinions. End editorial propaganda
Guarantee citizens' liberty by including in the constitution a complete prohibition on state interference in their decisions concerning education, health and family matters
Health/Environment
No more 'planned obsolescence' - Mandate guarantee from producers that their products will last 10 years, and that spare parts will be available during that period
Ban plastic bottles and other polluting packaging
Weaken the influence of big pharma on health in general and hospitals in particular
Ban on GMO crops, carcinogenic pesticides, endocrine disruptors and monocrops
Reindustrialize France (thereby reducing imports and thus pollution)
Foreign Affairs
End France's participation in foreign wars of aggression, and exit from NATO
Cease pillaging and interfering - politically and militarily - in 'Francafrique', which keeps Africa poor. Immediately repatriate all French soldiers. Establish relations with African states on an equal peer-to-peer basis
Prevent migratory flows that cannot be accommodated or integrated, given the profound civilizational crisis we are experiencing
Scrupulously respect international law and the treaties we have signed
END_OF_DOCUMENT_TOKEN_TO_BE_REPLACED
§Stop Macron
by United Public Workers For Action 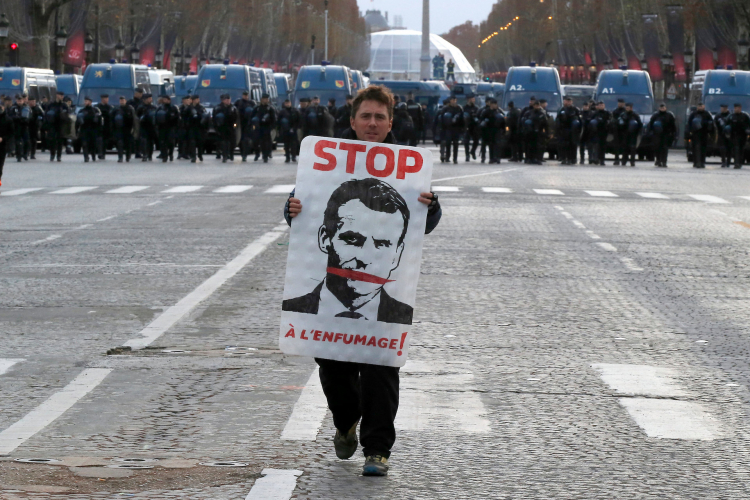 original image (1920x1280)
Despite massive police mobilization the people of France are mobilizing in the streets to bring Macron down. US workers need to learn from the history and action of the French working class.
END_OF_DOCUMENT_TOKEN_TO_BE_REPLACED
Add Your Comments
Latest Comments
Listed below are the latest comments about this post.
These comments are submitted anonymously by website visitors.
TITLE
AUTHOR
DATE
EVENT POSTPONED Until December 22 At 12:00 Noon
United Public Workers For Action
Support Independent Media
We are 100% volunteer and depend on your participation to sustain our efforts!