Public Forum: The Indictment of Julian Assange, The Corporate Media and Left Media 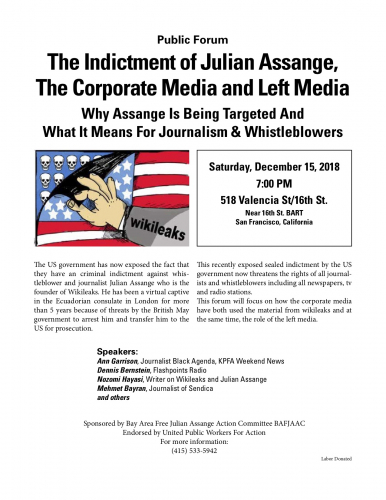 The US government has now exposed the fact that they have a criminal indictment against whistleblower and journalist Julian Assange who is the founder of Wikileaks. He has been a virtual captive in the Ecuadorian consulate in London for more than 5 years because of threats by the British May government to arrest him and transfer him to the US for prosecution. This recently exposed sealed indictment by the US government now threatens the rights of all journalists and whistleblowers including all newspapers, tv and radio stations.
This forum will focus on how the corporate media have both used the material from WikiLeaks and at the same time, the role of the left media.

It Is Possible Paul Manafort Visited Julian Assange. If True, There Should Be Ample Video and Other Evidence Showing This.
https://theintercept.com/2018/11/27/it-is-possible-paul-manafort-visited-julian-assange-if-true-there-should-be-ample-video-and-other-evidence-showing-this/

Glenn Greenwald
November 27 2018, 12:04 p.m.
Why You Should Care About the Julian Assange Case
Forget Jim Acosta. If you’re worried about Trump’s assault on the press, news of a Wikileaks indictment is the real scare story
NOVEMBER 23, 2018 12:30PM ET
https://www.rollingstone.com/politics/politics-news/taibbi-julian-assange-case-wikileaks-758883/?fbclid=IwAR3b98OGJOxHTi_qpQ4rOf1CdXvKeVvImsdxnrcDB_I8vEtNPBlx6qmyZlQ

Added to the calendar on Tue, Dec 4, 2018 2:42PM
Add Your Comments
Latest Comments
Listed below are the latest comments about this post.
These comments are submitted anonymously by website visitors.
TITLE
AUTHOR
DATE
What Is Wikileaks, Who Is Julian Assange, The Media and The Attacks On Journalists
KPFA WorkWeek Radio
Support Independent Media
We are 100% volunteer and depend on your participation to sustain our efforts!