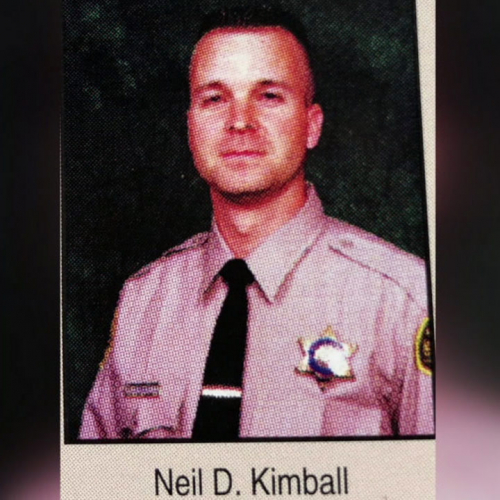 Sheriff's Deputy Neil Kimball has been placed on leave with pay by the department. His bail has been set a $2 million.

A sex crimes investigator with the Los Angeles County Sheriff's Department is facing felony charges for the alleged rape of a minor while he was on duty.

Prosecutors claim that sometime between October and December of 2017, Sheriff's Deputy Neil Kimball raped a 14-year-old girl while she was tied or bound then intimidated a witness.

The rape allegedly occurred during his time in the department's Special Victim's Bureau, according to the Ventura County District Attorney's Office. Officials did not release any information on the victim or what Kimball was investigating.

Kimball, 45, was arrested Friday and charged Tuesday on felony counts of rape by force and preventing or dissuading a witness or victim from testifying, according to the Los Angeles County Sheriff's Department.

An internal investigation revealed the crime occurred in Ventura County and their District Attorney will be handling Kimball's case. 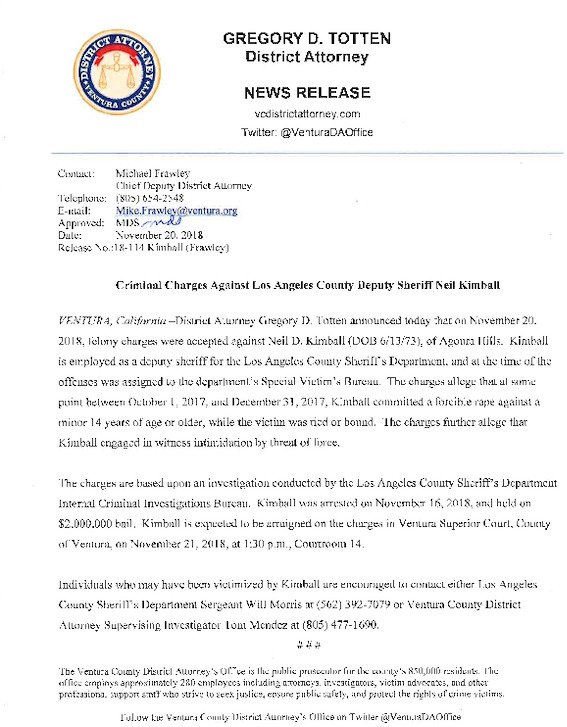 https://www.vcdistrictattorney.com/wp-cont...
Add a Comment
§I BELIEVE HE WAS THE LAPD DETECTIVE in Charge of my child's (unable to solve) Rape Case!
by I am afraid of the LAPD! 3000 boys
Tuesday Jan 8th, 2019 7:21 AM
Not Cool! My kid was raped, I believe I've met with this man, he was the LAPD Detective in charge of my child's sexual assault case last April (2018)
He is the person that told me-
the semon filled underpants,
that I had included with the UCLA rape kit was not admissible as evidence.
(What da What!)
I needed a Hero- I got Detective Kimball.
And He was unprofessional, at best...
Very Scary for my little girl too!
She had a mental meltdown after he interviewed us in the Santa Monica rape crisis center.

OMG! He also seems to have resided very close to where I live and raised my family!!
We must have been easy victims.

Also, sadly- eldest daughter, my minor's adult sister (both stunners, realy "pretty" girls) had experienced A "Horrific" date rape incident in 2017, the previous year!
-She told me she went to a BBQ with an Arminian fella, my daughter remembers being raped and unable to move her arms, or free herself!
When I found her, the following day-
my daughter had been left for dead!
Some jerk had left her to die,
Helpless in a pool of blood...
I know, I saved her life that day!
Unfortunately...
she also was not able to describe much more than that... when at the hospital (2 week stay/ major head injury!!)
LAPD officers looked me in the face,
outside Hollywood Pres. Acting with authority and Without a trace of disgrace- Two LAPD officers told me- with a seroius tone, that they see this often...
It Happen Mom-
Bottom line, your daughter went to a BBQ, got loaded, probably "fell" (not rape)
-and that is what it is!

After that incident, this young defenselless woman lived in constant "fear"
-One of the last times I saw her, my daughter told me she had a price on her head because had shown "disrespect" to a VERY BAD GUY! She went MIA Oct 2017.
The LAPD missing/vice filed a,report were very nice and have been polite

My eldest daughter's missing persons flier is on the board in Rampart Division. We lived very close him!
Our family lived within miles of Detective Kimball's home!
I always had "Momtuition" that my daughters must have been targeted :/

I found LAPD very polite, they filed reports and returned my calls. I now realize, from Thousand Oaks to Downtown Los Angeles,
it is not safe to raise families here-
my daughter never wanted to get raped, she wanted to go to a BBQ, with a StranGerman
(Stranger Danger!) This has destroyed her and my family as well! We will never recover, from the day when she went to that BBQ with that Arminian man.
Since Oct 2017, I have been unable to locate my Adult child- She is still MIA,
missing in Los Angeles. WTF LAPD!?
-Unfortunately, my eldest will never see justice.
However, my young child, whom is unable to understand exactly what has happened...
Was brave enough to tell someone recently, someone she trusted-
That she had met "Satan"
-and she was Sexually Assaulted.
NOT COOL to have neighbors and Police like Detective Kimball :/
My young child is the Bravest little girl- to tell someone... as well as to
HAVE MET with Detective Kimball!
Add a Comment
§Kimball was LASD NOT LAPD
by frank rizzo
Saturday May 4th, 2019 10:07 PM
This is a bad guy no doubt...but he was Sheriff not LAPD.....fyi
Add a Comment
Support Independent Media
We are 100% volunteer and depend on your participation to sustain our efforts!