Add an Event
Newswire
Calendar
Features
Home
Donate
From the Open-Publishing Calendar
From the Open-Publishing Newswire
Indybay Feature
Publish to Newswire
Add an Event
Related Categories: California | Central Valley | Santa Cruz Indymedia | Environment & Forest Defense | Government & Elections
Judge orders moratorium on offshore fracking in federal waters off California
by Dan Bacher
Saturday Nov 10th, 2018 10:24 PM
“Protecting the health of our coastal waters is essential to our commitment to conserving the ecosystem and marine life necessary for our maritime culture,” said Mati Waiya, executive director of Wishtoyo Foundation. “The decision by honorable Judge Gutierrez upholds the law that ensures the health of our ocean waters. We all celebrate this decision that honors the rights of our maritime resources.” 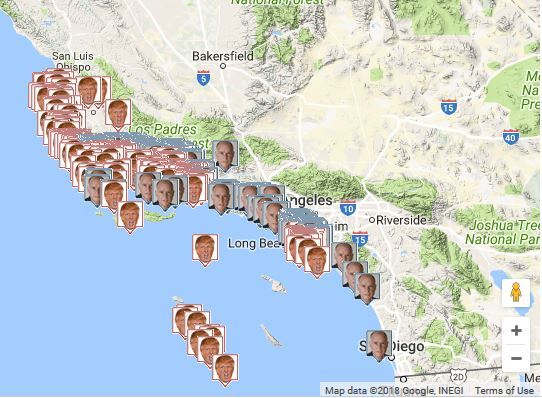 In a victory for the ocean, a federal judge on November 9 ordered the Trump administration to cease issuing permits for offshore fracking and acidizing in federal waters — waters over 3 miles from shore — off the coast of Southern California.

Gutierrez issued an injunction prohibiting the two responsible federal agencies, the Bureau of Ocean Energy Management (BOEM) and the Bureau of Safety and Environmental Enforcement (BSEE), from approving any plans or permits for the use of well stimulation treatments (WSTs) off California.

“Stopping offshore fracking is a big victory for California’s coast and marine life,” said Kristen Monsell, oceans program legal director at the Center for Biological Diversity. “We’re glad the Trump administration lost this round in its push to expand dangerous oil operations off California. This decision protects marine life and coastal communities from fracking’s toxic chemicals.”

This order is an important step in addressing the expansion of fracking off California, although it doesn’t impact state waters within 3 miles from shore, where most of California’s offshore oil wells are located. Fortunately, litigation has prevented fracking from taking place in state waters for several years.

The court order results from three lawsuits filed by the state of California, Center for Biological Diversity and Wishtoyo Foundation, and the Environmental Defense Center and Santa Barbara Channelkeeper challenging the federal government’s approval and environmental review of offshore fracking in the Pacific Ocean.

“Protecting the health of our coastal waters is essential to our commitment to conserving the ecosystem and marine life necessary for our maritime culture,” said Mati Waiya, executive director of Wishtoyo Foundation. “The decision by honorable Judge Gutierrez upholds the law that ensures the health of our ocean waters. We all celebrate this decision that honors the rights of our maritime resources.”

The court ruled that federal officials violated the Endangered Species Act by failing to complete its consultation with the U.S. Fish and Wildlife Service on the impacts of offshore fracking on endangered species.

“The court also said the Trump administration violated the Coastal Zone Management Act when it failed to let the California Coastal Commission determine whether offshore fracking is consistent with California’s coastal management program,” said Monsell. “The judge ordered the feds to complete the process with the State of California before approving any permits for offshore fracking.”

“Endangered sea otters and other critters just won a reprieve from the Trump administration’s assault on our oceans for dirty oil,” Monsell stated. “We plan to celebrate this great victory in the fight against climate change and dirty fossil fuels. This court decision sends a strong message that we need to get dangerous drilling out of ocean, out of coastal areas and out of our state.”

Exxon Mobil Corporation, the American Petroleum Institute and DCOR, LLC, joined the Trump administration in opposing the lawsuits. The oil industry claims fracking is safe and poses no harm to the environment, noting that the Barack Obama administration permitted fracking and acidizing in federal lands and waters when the lawsuits were filed.

However, Center scientists contest oil industry claims that fracking is harmless, since they have found that at least 10 fracking chemicals routinely used in offshore fracking could kill or harm a broad variety of marine species, including marine mammals and fish. “The California Council on Science and Technology has identified some common fracking chemicals to be among the most toxic in the world to marine animals,” said Monsell.

In a tweet, Attorney General Xavier Becerra responded to the ruling: “California didn’t back down when the federal government moved forward with plans for #fracking off our pristine shores. Today’s ruling stops @BOEM_DOI in their tracks and sends them back to the drawing board to follow the law. #ProtectOurCoast”

“We are pleased that the court has put a halt to the risky practice of fracking and acidizing off our coast,” said Maggie Hall, Staff Attorney at EDC, which represents EDC and SBCK in this matter. “This ruling ensures that no further permits will be issued until potential impacts to threatened and endangered species, including the Southern sea otter and Western snowy plover, are considered.”

Hall said EDC previously filed a lawsuit to stop fracking and acidizing in the region after discovering, through a series of Freedom of Information Act (FOIA) requests, that more than fifty permits had been issued by the federal government without any public or environmental review. When the government failed to conduct full environmental review or consult with Fish and Wildlife Service, she said EDC and SBCK "had no choice but to file this lawsuit."

While fracking in state and federal waters has been halted for the time being, traditional methods of offshore oil drilling continue in state and federal waters off the California coast. On September 8, Governor Jerry Brown signed two bills, SB 834 and AB 1775, to block new federal offshore oil drilling along California’s coast, but consumer and environmental justice advocates pointed out that he needs to also to stop his expansion of new offshore drilling in state waters, where Brown controls four times the number of wells that the Donald Trump does.

In a separate action, Brown announced the state’s opposition to the federal government’s plan to expand oil drilling on public lands in California as 30,000 people from California and throughout the world marched in San Francisco to demand that Brown halt his pro-Big Oil policies, including the approval of 21,000 new oil and gas permits, an oil industry-written cap-and-trade program, the pollution of California aquifers with toxic oil waste, and the irrigation of crops with oil wastewater.

This action came days before mayors, governors, heads of industry and international leaders convened in San Francisco for the purpose of “mobilizing climate action” at the Global Climate Action Summit. Meanwhile, a coalition of indigenous, environmental justice and conservation groups engaged in direct action outside of the summit.

Consumer Watchdog thanked Governor Brown for signing SB 834 and AB 1775, but the group noted that Brown has jurisdiction over four times more state oil wells in state waters off California’s coast than oil wells Trump has control of in federal waters off the coast — and said Brown needs to shut those wells down.

“During his administration Brown, has issued more than 20,000 permits to drill new oil and gas wells in California, and that includes more than 200 permits for off shore wells in state waters -- wells within 3 miles of the California coast,” said Jamie Court, President of Consumer Watchdog.

"Governor Brown cannot preach one mantra of 'Drill baby drill' in California and another when it comes to Trump drilling in federal waters off California," said Court. "That’s hypocrisy not leadership. Governor Brown needs to revoke the permits for the hundreds of oil wells he has approved off California’s coast if he is willing to prevent Trump from drilling in federal waters off California. Today’s signing is an important step for coastal protection, but Brown needs to walk the walk and revoke the permits of the offshore wells he controls in state waters too."

Between 2012 and 2017, Brown Administration regulators issued about 238 permits for new state wells in existing offshore leases, within three miles of the coast, and 171 of those offshore wells are currently active, according to analysis by the nonprofit FracTracker Alliance. Oil production continues from 1,366 offshore wells in existing leases, according to the California Department of Conservation in 2017.

An online map at http://www.BrownvTrumpoilmap.org shows all the state offshore wells under Brown’s control vs the federal wells under Trump’s control, with geolocation data for each.

Over 800 public interest groups have called upon Brown to limit neighborhood drilling and freeze new oil permits before he leaves the Governor’s Office in January and Gavin Newsom takes the helm. Brown has refused to do so to date. Read more at http://www.brownslastchance.org.

The vulnerability of the California coast to an oil spill was demonstrated during the Refugio Oil Spill of May 2015, when over 9 miles of the Southern California Coast, including four so-called “marine protected areas” were fouled with crude oil from badly corroded pipeline operation owned by the Plains All American Pipeline Company out of Houston Texas. A jury found oil pipeline company Plains All American Pipeline, L.P. (Plains) guilty of one felony and eight misdemeanor counts in the Refugio Oil Spill of 2015 that fouled over 9 miles of coast.

Ironically, in an apparent conflict of interest, Catherine Reheis Boyd, the President of the Western States Petroleum Association, the lobbying organization for the Plains All American Pipeline Company, served from 2009 to 2012 as the chair of the Marine Life Protection Act (MLPA) initiative Blue Ribbon Task Force to create marine "protected areas" (MPAs) in Southern California, including four MPAs being fouled by the spill.

”You may not realize it when thinking about politics in environmentally conscious and ‘green’ California, but an 18-month-long NBC Bay Area and Maplight investigation found the oil and gas industry paid $182 million to California politicians, PACs and political causes between 2001 and June 30, 2018,” reported NBC Bay Area on October 25. “For the past year and a half, the Investigative Unit worked with Maplight, a nonpartisan group based in Berkeley that tracks campaign contributions to uncover just how much money and influence the oil and gas industry wields in Sacramento.”

To view the full report, go to: https://www.nbcbayarea.com/investigations/Oil-Gas-Money-Green-California-Politics-494820061.html

WSPA and Big Oil wield their power in 6 major ways: through (1) lobbying; (2) campaign spending; (3) serving on and putting shills on regulatory panels; (4) creating Astroturf groups: (5) working in collaboration with media; and (6) contributing to non profit organizations. For more information, go to: https://www.dailykos.com/stories/2018/9/3/1792899/-A-Must-Read-Before-Going-to-the-Climate-March-on-September-8-Big-Oil-and-WSPA-s-Grip-on-California
Add Your Comments
Support Independent Media
We are 100% volunteer and depend on your participation to sustain our efforts!