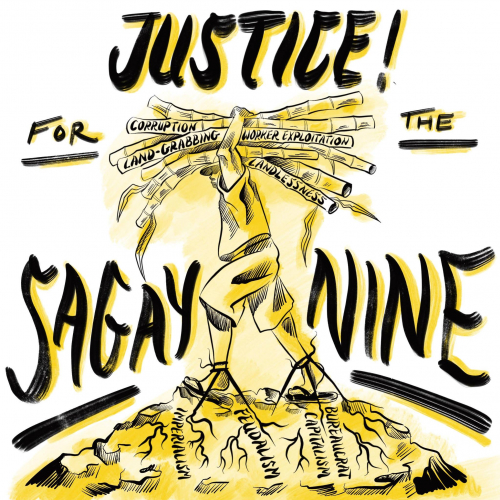 original image (2048x2048)
The pattern of extrajudicial killings plaguing the Philippines continues to disproportionately impact indigenous people, peasants, farmers, workers, as well as human rights defenders including lawyers and journalists and students, for their activism and resistance against the U.S.-backed fascist authoritative regime that has characterized the Philippines for years.

Ramos’ life was committed to serving the people, this was clear in their willingness to support the people without a paywall. Before their death, Ramos contributed significant work in the case of the “Sagay 9”: the slaughter of nine farmers sleeping in their tents in Sagay City, Negros Occidental on October 20, 2018. These farmers were a part of the National Federation of Sugar Workers (NFSW) and were participating in a collective farming project on lands named Hacienda Nene (r.BAYAN-USA). These lands, otherwise unused, provided for these farmers and their communities. This is the reality for those who choose survival and resistance in the Philippines.

In a society where access to food is becoming increasingly restricted due to neoliberal policies leaving underdeveloped nations reeling in the wake of imperial supremacy - local projects to provide food for the masses should be arduously encouraged not punished by death.

Ramos’ death - like all the rest - is a great one and is deeply mourned among those of us that are left behind to carry on their work. Another human rights defender murdered, another voice silenced.

We, Anakbayan Santa Cruz, recognize that the U.S. imperial power has a deep interest in silencing the voices of power and resistance of the masses here and at home in the Philippines. We call to end the $185 million in U.S. military aid to the Philippines that bankrolls these extrajudicial killings (r.BAYAN-USA).

Justice for the Sagay 9! Growing Food to Feed the Hungry Is Not a Crime!

Down with the U.S. war machine!
https://www.facebook.com/pg/AnakabayanSant...
Add Your Comments
Support Independent Media
We are 100% volunteer and depend on your participation to sustain our efforts!